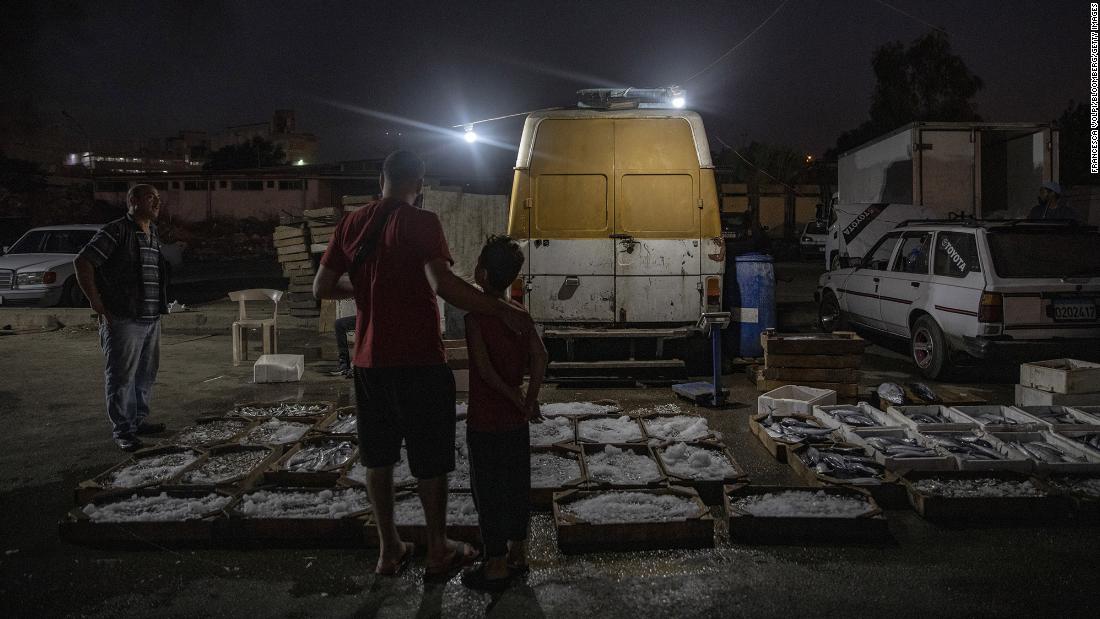 Lebanon’s soul has been eviscerated by its financial crisis. Not even the children want to play

By: Daisy-May Amos
In: Uncategorized
Tagged: children, crisis, eviscerated, financial, Lebanon's soul has been eviscerated by its financial crisis. Not even the children want to play - CNN, Lebanons, middleeast, play, SOUL
With: 0 Comments

He shakes his head. He doesn’t want to join the other children decorating the tree we’ve brought in.

“Maali khili’” he responds — he doesn’t have the energy for it.

“He’s always like this” his father explains, pulling him in closer and planting a gentle kiss on his forehead.

I try again to engage him. “What can we do to make you smile?” I ask.

His father, a Syrian refugee in Lebanon, scrawls wishes on holiday decorations. “I want health,” he writes on one A-4 paper. “I want to feel safe.”

“Here you do it. Hold the pencil,” he says, placing a pencil in his son’s hand. The boy doesn’t even wrap his fingers around it. It clatters to the ground.

He’s the first child in INARA, which helps war-wounded children, who can’t be coaxed into engaging, who refuses to even eat a chocolate cake that’s in front of him.

A little later, the father and I move to another room. The father speaks breathlessly for 45 minutes. It all tumbles out: How he’s struggling to keep his family healthy and fed. He can’t keep up. He can’t win. He just watches his children fade before his eyes.

“They are disappearing in front of me and I don’t know what to do.”

This is one family in a nation that is filled with drowning souls. The Syrian refugee population here was always downtrodden. But they have been plunged into new depths, with 99% of Syrian refugee households without enough food, according to the United Nations. The Lebanese have fared better but not by much — the poverty rate in the country is around 80%.

Beirut feels both familiar and utterly foreign. I’ve been coming in and out of here since 2003 and was based here from 2010 to 2014. In the Beirut of today, people go through the motions and the energy that once made the city vibrant has dissipated continuously since the start of a financial catastrophe that began in October 2019. It once had an energy of being alive, but now that’s all gone.

I grab a cab to meet a friend for dinner. The streets seem to be more crowded with beggars than with pedestrians.

“They’ve destroyed us. I swear people are thinking of suicide,” the cab driver says. He’s talking to me but also just to himself.

He’s referring to the country’s political elite. These days, they are referred to as “thieves,” “criminals” and “killers” who have decimated the country’s wealth, leaving it writhing in pain and shock, barely able to process its new reality.

“You know the other day I bought labneh (a kind of Arabic cream cheese) and white cheese, not the spicy one, that’s too expensive,” he says. “I bought a total of four things at the shop, and it cost me the same as what I used to pay to fill my whole fridge.”

“How are you explaining this to your children,” I ask.

“It burns my heart. To have your kids ask you for things you can’t buy. Small things. Jam and Nutella. I just tell them to be patient, that daddy is doing everything he can. I don’t lie to them.”

He had to pull his children out of private school and put them into a public one. But that school is now closed because the teachers have gone on strike.

“I swear to you, the other day I was just sitting, and I started to cry,” he says.

He drops me off at a lovely restaurant on a hill just outside the city. It feels surreal to be there. The privilege of knowing that I can eat is actually nauseating.

My close friend, Reina Sarkis, who is a psychoanalyst, is already at the table. She’s dropped a ton of weight and she’s pale.

“Thank you for coming all the way out here, I just get so tired,” she says as we hug.

Reina has a chronic health issue and just had a treatment session earlier that day.

“Can you believe I’m still out here? You know I haven’t cried yet,” she says.

Reina lost her beautifully renovated home in one of Beirut’s historic buildings in the August 2020 port blast, for which no one has yet been held accountable. She barely got out alive, a miracle in many ways. Like everyone else her savings are now worthless. She’s stuck.

“Just because we breathe, it’s not proof of life,” she tells me.

I see it in the faces of friends and strangers. A light has gone out. There is no real genuine laughter, no self-deprecating commentary typical of the Lebanese.

A nation that has always managed to plaster its wounds is now utterly crushed, its soul eviscerated.

The country didn’t deteriorate overnight. It’s been happening in slow motion for years. But the last two years have thrown it into a full speed collision.

The World Bank considers Lebanon’s economic catastrophe one of the world’s worst since the mid-19th century and has dubbed it a “deliberate depression.” The country has had discretionary capital controls since October 2019, meaning banks can choose who to allow to withdraw their money. Typically this has been restricted the country’s mega-powerful.

Most people’s life savings have vaporized, inflation has skyrocketed and the country’s currency has lost over 95% of its value in two years. The result is the mass pauperization of the population.

You drive for hours from pharmacy to pharmacy looking for a basic pain killer or medicine for your ailing father. Certain drugs and products aren’t even brought in anymore, not enough people can afford to buy them.

“To know about a crisis is different to living it organically on a daily basis,” Reina says to me.

I sit and listen, and I can’t say anything. Not to her, not to anyone else I spent the last few days talking to.

I have no frame of reference for what it’s like for a parent to have to explain to their children why they can’t eat meat anymore, let alone buy gifts for the holidays. Or even worse, why they have been pulled from school and sent to work. UNICEF’s most recent report says that child labor in Lebanon has doubled in the last year.

There is a rage that trembles through everyone, coupled with deep depression. The despair of adults has seeped into the children.

The next day, the car I am in rolls slowly past a small playground. I look out the window at the children. They seem to be moving in slow motion, like they’re on the sidelines of childhood. Kids don’t want to play anymore.