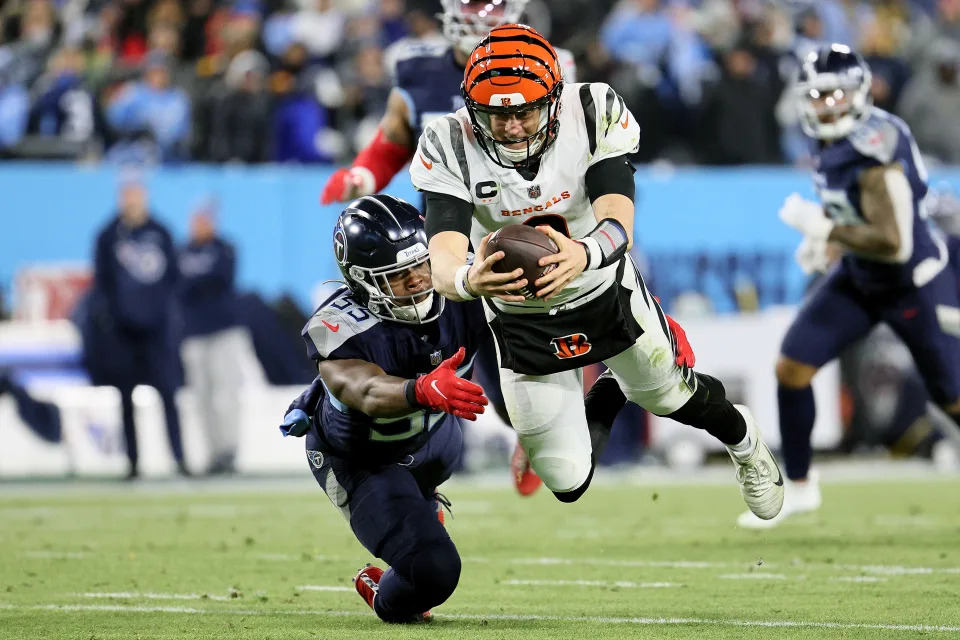 It is colossally unfair to put a second-year quarterback’s name in the same sentence as the two greatest to play the game.

But if you watched Joe Burrow on Saturday night, when he was sacked nine times and hit 13, yet still had the calm to stand in the pocket and deliver a 19-yard pass to put the Cincinnati Bengals in game-winning field-goal range, it was hard not to see Joe Montana and Tom Brady.

The stage, the pressure, the stakes. And Burrow stepped up into the pocket and found super rookie Ja’Marr Chase on the right sideline, arguably the biggest pass of his young NFL career.

Three plays later, another Cincinnati rookie, kicker Evan McPherson, nailed a 52-yard field goal as time expired to give the Bengals a 19-16 win against Tennessee and send the team to the AFC championship for the first time since the 1988 season.

It has been a postseason of firsts for these Bengals: first playoff win in 31 years, first road playoff win ever (the team was 0-7 before Saturday). Maybe it’s their youth, maybe it’s finally the franchise’s time.

Being a starting NFL quarterback is one thing. Lots of teams have QBs who make enough plays to win at this level. The team the Bengals beat Saturday, the Titans, got to the No. 1 seed in the AFC with one of those quarterbacks. Ryan Tannehill’s third-quarter touchdown pass to A.J. Brown in the front right corner of the end zone was a thing of beauty. But Tannehill also had three interceptions in the game, one on the first play and one on his last play, with a batted-ball pick in between.

But exceedingly few quarterbacks can be the reason why a team wins, through unflappable confidence that covers everyone in the huddle with them, flawless playmaking when it’s most needed, the ability to have perfect clarity in the moments things are most hectic.

The Titans had the ball at their own 19 with two minutes to play and were nearing midfield when a Tannehill pass intended for Nick Westbrook-Ikhine was broken up by cornerback Eli Apple and intercepted by linebacker Logan Wilson.

The line of scrimmage was the Cincinnati 47, and Burrow had less than 20 seconds to get the Bengals into field-goal range. He got them there in one play.

It’s easy to say that’s Burrow’s job in that moment, but how many other quarterbacks can do that? Especially when they’re just two seasons in and, oh by the way, 14 months to the day removed from a frightening torn ACL? After they’ve been battered for a whole game?

In fairness to the Bengals’ line, not all of the sacks were on that group; at least a couple were on Burrow. Regardless, he completed 75.7 percent of 37 pass attempts for 348 yards. According to NFL NextGen Stats, he averaged 10.5 yards per on the 31 attempts he didn’t face pressure.

Burrow isn’t the only cool customer in Cincinnati. According to teammates, after taking a couple of practice swings and as he was headed onto the field for his kick, McPherson looked at backup quarterback Brandon Allen and said, “Well, looks like we’re going to the AFC championship game.”

Like Montana and Brady, Burrow doesn’t have off-the-chart physical gifts, though that pre-draft knock that he didn’t have great arm strength has been proven wrong since he has been reunited with his LSU teammate Chase, who can outrun almost anyone and catch almost anything if you get it close enough to him.

But the mental part of the game, the gift that is more important than any physical trait, Burrow has that. And he has that intangible “it” factor, impossible to define but unmistakable when you see it in action. Montana once broke the tension of a Super Bowl huddle by pointing out comedian John Candy in the stands. Robert Kraft likes to say that after the Patriots chose Brady 199th in the 2000 draft he crossed paths with the club owner and declared himself the best decision the franchise had ever made.

Burrow is starting to voice the same kind of swagger.

Burrow’s point: It’s us. He knows he can get them there. His teammates believe him. The rest of us get to watch the show.