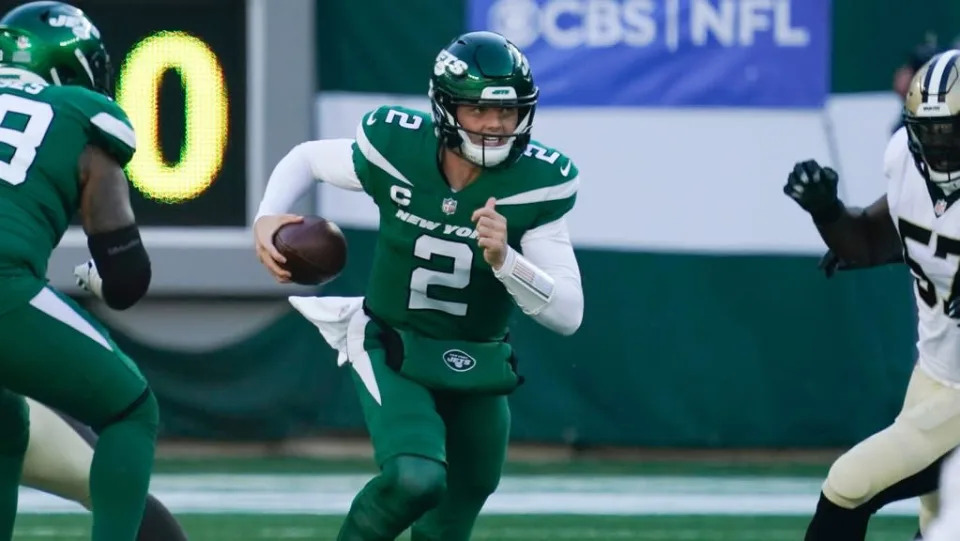 This was the time of the season when it was all supposed to start coming together for Zach Wilson. The growing pains weren’t going to disappear entirely and his head figured to still be spinning. But now is when it was supposed to look a little easier for the rookie quarterback.

That’s just not how it’s actually working out.

Wilson struggled again on Sunday, completing just 19 of 42 passes for 202 yards in the Jets’ 30-9 loss to the New Orleans Saints. The Jets offense had just 256 yards under his direction, and they were barely over 200 until the final, meaningless drive.

It’s hard to blame it all on the 22-year-old, of course. He came into this game without his top two receivers (Corey Davis and Elijah Moore) and his top two running backs (Michael Carter and Tevin Coleman). And he was victimized by the Jets’ usual offensive ineptitude, including three drops by running back Ty Johnson and back-to-back drive-killing penalties at the end of the first half by Denzel Mims.

He’s not exactly surrounded by an all-pro cast. The problem is that reinforcements aren’t coming. This is essentially what he’s going to be playing with the rest of the way. And that’s a big problem because Wilson isn’t exactly capable right now of carrying a team. He needs a team to help carry him.

That was clear on Sunday when it was, oddly, the easiest passes that were the most troublesome for Wilson. He had a play early where he rolled right, avoided Saints defender, and had tight end Ryan Griffin wide open a few yards away. Wilson lobbed the ball several yards behind him. In the second half, he tried to hit a wide-open Braxton Berrios off to the left. He actually bounced that pass to him, despite no pass rush in his face at all.

He’s obviously a better passer than that. Throws like that usually happen when a quarterback isn’t confident in his throws, isn’t exactly sure what to do. With his head swirling with information, his touch on the easy throws are just off.

Again, that wasn’t supposed to be happening 13 games into the season, but he doesn’t have the help around him to settle him down. Receivers aren’t getting open, others are dropping passes, the running game isn’t doing anything at all. And when too many things go wrong on offense, that can make a young quarterback press even more.

And if that continues, it essentially makes this stretch of a games a wasted opportunity. The Jets hoped that the final month of the season would be about Wilson showing he was an NFL quarterback, proving to everyone (and himself) that he had learned enough to be in position to take a big leap forward next year.

It’s just hard to see how that can happen with the way things are going right now.