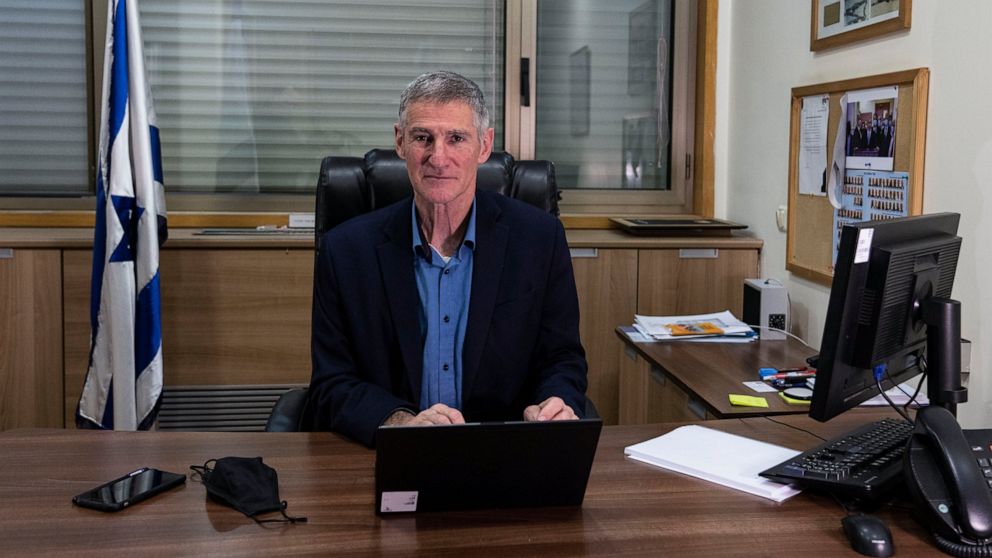 JERUSALEM — Retired general Yair Golan spent a significant part of his military career serving in the occupied West Bank, protecting Jewish settlements. Today, he is one of their most vocal critics.

Golan, a former deputy military chief, is now a legislator with the dovish Meretz party, where he has repeatedly spoken out against settler violence against Palestinians.

His comments, highlighted by his recent description of violent settlers as “subhuman,” have rattled Israel’s delicate governing coalition, and his opponents have labeled him a radical. He joins a cadre of former security personnel who, after not speaking up while in uniform and positions of influence, have in retirement sounded the alarm over Israel’s five-decade-long military rule of the Palestinians.

“You can’t have a free and democratic state so long as we are controlling people who don’t want to be controlled by us,” Golan told The Associated Press in an interview at his office in the Knesset this week. “What kind of democracy are we building here long term?”

Golan has emerged as a rare critical voice in a society where the occupation is largely an accepted fact and where settlers have successfully pushed their narrative through their proximity to the levers of power. Most members of Israel’s parliament belong to the pro-settlement right wing.

Golan, 59, had a long military career, being wounded in action in Lebanon and filling key positions as head of the country’s northern command and as commander of the West Bank, among others.

Along the way, he gained a reputation as a maverick for decisions that sometimes landed him in hot water. At one point, he reached an unauthorized deal to remove some settlers from the West Bank city of Hebron. He was reprimanded and a promotion was delayed after he permitted the use of Palestinian non-combatants as human shields during arrest raids, a tactic the country’s Supreme Court banned.

At the same time, he was credited with permitting thousands of Syrians wounded in their country’s civil war to enter Israel for medical treatment.

As the deputy military chief, he was passed over for the top job after comparing what he saw as fascistic trends in modern-day Israel to Nazi Germany. He believes the speech cost him the position.

A few years after retirement, he was elected to parliament and eventually joined Meretz, a party that supports Palestinian statehood and is part of the current coalition headed by Prime Minister Naftali Bennett.

Meretz has been one of the few parties to make ending Israel’s occupation a top priority. But since joining the coalition, which has agreed to focus on less divisive issues to maintain its stability, most of its members have appeared to tone down their criticism.

Golan has not. Earlier this month, he caused a firestorm when he lashed out against settlers who vandalized graves in the Palestinian West Bank village of Burqa.

“These are not people, these are subhumans,” Golan told the Knesset Channel. “They must not be given any backing.”

His remarks angered Bennett, a former settler leader, and sparked criticism from others within the coalition.

Golan acknowledged his choice of words was flawed but said he stands by the spirit of his remarks.

“Is the problem the expression that I used or is the problem those same people who go up to Burqa, smash graves, damage property and assault innocent Palestinians?” he said.

Such statements have turned him into a poster boy for what far-right nationalists describe as dangerous forces in the coalition challenging Israel’s role in the West Bank. The Palestinians seek the area, captured by Israel in 1967, as the heartland of a future state.

Some on Israel’s dovish left also have been hesitant to embrace Golan, who continues to defend the army’s actions in the West Bank.

Golan always saw his duty in the territory as primarily combatting Palestinian militants, and he continues to believe that most settlers are law-abiding citizens. The international community overwhelmingly considers all settlements illegal or illegitimate, and the Palestinians and many left-wing Israelis see the military as an enforcer of an unjust occupation.

Breaking the Silence, a whistleblower group for former Israeli soldiers who oppose policies in the West Bank, called for action, not just words, against settler violence.

“Yair Golan knows full well what settler violence looks like and what our violent control over the Palestinian people looks like. That’s why his criticism is valuable, but it’s not enough,” the group said in a statement.

Golan said he always saw Israeli control over Palestinian territories as temporary. He said separating from the Palestinians is the only way to keep Israel a democratic state with a Jewish majority.

In 2006, Golan commanded the violent evacuation of the Amona settlement in the West Bank, which was built on privately owned Palestinian land.

“I can’t come to terms with the idea that someone Jewish who holds Jewish values supports the theft of someone else’s lands,” he said.

In recent months, as violence between settlers and Palestinians in the West Bank has ticked up, videos have emerged of soldiers standing by as settlers rampage. Golan said he never would have allowed such a thing under his command.

“These people don’t accept the essence of Israel and abide by the law only when it’s convenient for them,” he said.

His comments about settlers aren’t the first to rankle the establishment. In a 2016 speech marking Israel’s Holocaust memorial day, Golan, then deputy military chief, said he was witnessing “nauseating processes” in Israeli society that reminded him of the fascism of Nazi-era Germany.

He said the remarks were sparked by the fatal shooting of a subdued Palestinian attacker by a soldier. The soldier was embraced by nationalist politicians, including then-Prime Minister Benjamin Netanyahu. Golan said the shooting was nothing short of an execution.

Next to his desk, Golan keeps a photo of Netanyahu arriving for his corruption trial at a Jerusalem courthouse, surrounded by his Likud Party supporters as he rants against police and prosecutors.

Golan said the image is a reminder of what he is fighting against — and for.

“I served the country in uniform for so many years, I really gave it my life,” Golan said. Pointing to the photo, he said: “I didn’t endanger my life countless times for these people.”