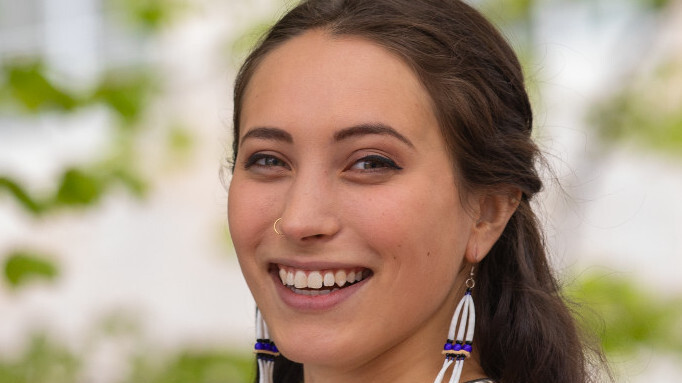 Indigenous activists are united in a cause and making themselves heard at COP26 : NPR

Ruth Miller is among a group of young Indigenous activists who have come to add their voice to COP26.

Ruth Miller is among a group of young Indigenous activists who have come to add their voice to COP26.

In a crowded house above a pub in Scotland, Ruth Miller is busy planning her next move.

The 24-year-old Climate Justice Director for the Alaska-based grassroots group, Native Movement, is one of nine young people squeezed into the four-bedroom rental in between attending events at the COP26 UN climate summit.

But even having to stay an hour’s drive outside of the main conference venue, they are among the activists who are insisting the politicians, dignitaries, and negotiators hear their stories, voices, and expertise.

Miller grew up in Anchorage, Alaska and is native Dena’ina Athabascan. Some of her roommates here are from New Zealand, or islands in the South Pacific.

They’re hanging out in a living room with low wooden furniture covered in mustard-colored velvet cushions, joking about some of their shared experiences as kids who grew up in native communities.

Without planning on it, they all brought different kinds of smoked fish to Scotland: Salmon from Alaska, eel from New Zealand.

But of course, their connections go much deeper than food. They came here with a shared view of how lands and waters are connected, and how to care for them.

“It does seem less like learning new things and more like meeting a long-lost family member that you haven’t seen in quite some time,” Miller says of the gathering.

Everyone squeezes around the dining table for a family-style meal of takeout Thai food while 23-year-old Tiana Jakicevich leads everyone in a blessing.

Everyone in the house gathers for dinner ahead of another packed day at the COP26 summit.

Everyone in the house gathers for dinner ahead of another packed day at the COP26 summit.

Then they talk about logistics for the next day’s events — planning how to get to and from the conference site.

They had to raise their own money for this trip and staying in Glasgow was way too expensive.

In some ways, it’s a metaphor for their experience of the conference itself. Even though they have had meetings with top officials, these activists are sometimes on the outside looking in, trying to carve out space for their people.

“Being an Indigenous youth at COP is extraordinarily limiting and tokenizing in a number of ways, both by nature of being Indigenous and by being youth,” Miller says.

Miller and Jakicevich talk candidly about their shared experience, including of a warming planet. From the Arctic, where Miller is from, to the Southern Hemisphere, where Jakicevich lives.

“While Ruth’s ice is melting, our seas are rising. So we are intrinsically connected to the earth and each other through that,” Jakicevich says.

Jakicevich woke up recently to news that her small town was in a state of emergency after three months’ worth of rain fell in 48 hours. And she has seen more gradual climate-caused changes at home too.

“When I was little we used to go down to the beach and collect Tua Tua,” she says.

“It’s like a little shellfish and you used to just dig in the sand for them. And every year we kept going back and they moved every year, and then about five years ago we couldn’t find them.

“So at this point in time, where we’ve always been able to collect Tua Tua from, we no longer can any more.”

That’s in New Zealand. And Alaska is heating up much faster than the rest of the planet.

Miller has seen record-setting wildfires and relocations from land that her people have lived on for generations.

“You can’t adapt to the places that are lost due to climate change.

“This past year, when I was forced to watch our sitka, our salmon, dying in streams of heatstroke, it was heartbreaking.”

That’s why these activists put in the work, raised the money, and risked their health to fly to Scotland during a pandemic.

But now that they’re at the conference, they say it sometimes feels like everyone wants to put them in a box and force them to conform to standards with a history of colonialism.

When asked how that can play out, Miller says by “whitening our speech and whitening the way that we behave and wearing blazers and such.”

“I mean, if we do bring our whole Indigenous selves, it gets translated as a photo opportunity in COP spaces,” she says.

Sometimes, Miller adds, they are invited to panels where they feel like organizers only want them to demonstrate victimhood. And they show up with more than stories of suffering.

“A number of us are extremely well versed in the substantive content of particularly Article 6 of the Paris Agreement, of a number of negotiating platforms,” Miller said.

Article 6 is about carbon markets: a system that lets companies buy or sell credits towards a specified amount of CO2 emissions. The activists here see it as a gift to big business and a plan that endorses systems of capitalism that created these problems in the first place.

“We work in these fields as well as being youth. And yet, most of what I’ve talked about is how difficult it is for youth to be heard. We don’t even get to talk about what we would talk about if we were heard,” Miller says.

They would also like to see plans to protect human rights and Indigenous rights spelled out in the text of the COP agreement.

Last week, Miller says she was offered a platform where she could have raised some of these ideas.

She was invited to speak at an Indigenous Peoples event with Alok Sharma, the President of COP26. Then, the schedule ran long and the meeting abruptly ended before she could speak.

COP26 President Alok Sharma discusses the outcomes of the youth climate summit on day six of the COP26 in Glasgow.

COP26 President Alok Sharma discusses the outcomes of the youth climate summit on day six of the COP26 in Glasgow.

Sitting in the rental house outside Glasgow, Miller outlines what she would have said if she had been given the opportunity.

“I would remind [Sharma] of our Indigenous diplomats and the ways that we call in deep community,” she says.

And she would have offered him a traditional song.

“My people come from volcanoes, and this song was gifted to me in a time of great need,” she says.

“It is a song of deep, deep earth and of ancestors that are older than human. It is a song that reminds me of embers and the way that we tend to our fires.

“But what I would have reminded him of is … our embers are not ones that easily go out or fade away.

“The embers of our Indigenous voices, if they are neglected or ignored, they tend to start fires.”