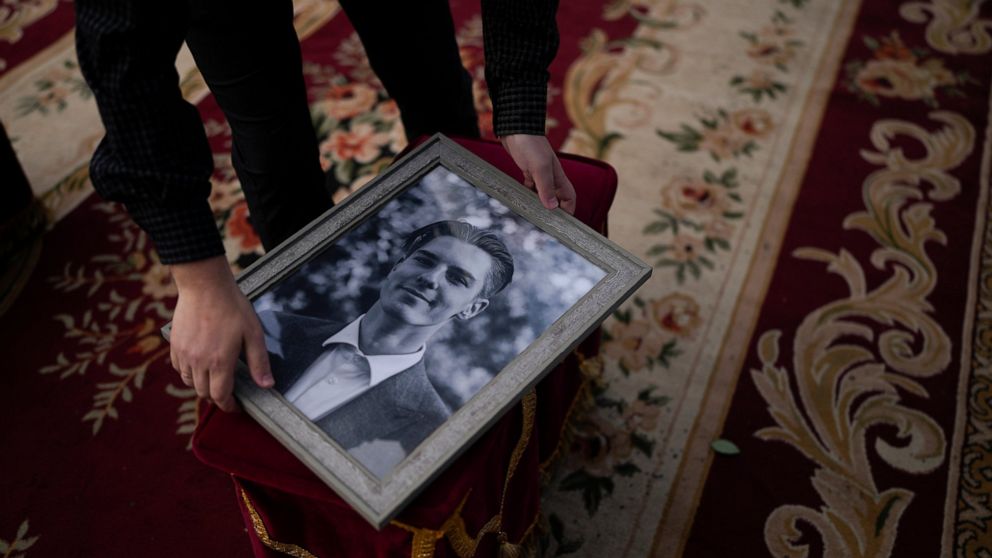 In Ukraine, funeral for activist killed and mourned in war

KYIV, Ukraine — Poppies, the blood-red flowers that cover the battlefields of Europe’s two world wars, were lain in mourning Saturday on the coffin of yet another dead soldier, this one killed in yet another European war, in Ukraine.

The hundreds of mourners for Roman Ratushnyi, 24, included friends who had protested with him during months of demonstrations that toppled Ukraine’s pro-Russia leader in 2014 and who, like him, took up arms when Moscow launched its full-scale invasion of its neighbor this February.

The arc of his shortened life symbolized that of Ukraine’s post-independence generations that are sacrificing their best years in the cause of freedom. First, with defiance and dozens of lives against brutal riot police during Ukraine’s Maidan protests of 2013-2014 and now with weapons and even more lives against Russian President Vladimir Putin’s troops.

“Heroes never die!” friends, family and admirers shouted in Ukrainian as Ratushnyi’s coffin was loaded aboard a hearse on a square in the Ukrainian capital now decorated with destroyed Russian tanks and vehicles. Their charred hulks contrasted with the shiny gold domes of an adjacent cathedral where priests had earlier sung prayers for Ratushnyi, who was well-known in Kyiv for his civic and environmental activism.

From the square, the mourners then walked in a long silent column behind his coffin to Maidan Nezalezhnosti, or Independence Square. The vast plaza in central Kyiv gave its name to the three months of protests that overthrew then President Viktor Yanukovych in 2014 and which helped fuel the political and patriotic awakening of Ukrainians born after independence in 1991.

Ratushnyi had “a heart full of love for Ukraine,” said Misha Reva, who traveled overnight in his soldier’s uniform from front lines in the east to say goodbye to the friend he met for the first time on Maidan, in the midst of the protests. Ratushnyi was then just 16; Reva was in his early 20s. It was Ratushnyi who introduced Reva to the woman who is now his wife, also on the square.

In other developments Saturday, British Prime Minister Boris Johnson expressed concerns “that a bit of Ukraine fatigue is starting to set in around the world” and said Ukraine must be supported in trying to roll back the Russian invasion to “make sure the Ukrainians are not encouraged to go for a bad peace, something that simply wouldn’t endure.”

“It would be a catastrophe if Putin won. He’d love nothing more than to say, ‘Let’s freeze this conflict, let’s have a ceasefire,'” Johnson said. “For him that would be a tremendous victory. You’d have a situation in which Putin was able to consolidate his gains and then to launch another attack.”

Johnson spoke on his return from a surprise trip Friday to Kyiv where he met with Ukrainian President Volodymyr Zelenskyy to offer continued aid and military training.

Western-supplied heavy weapons that Ukraine has been pushing for are reaching front lines, although not in quantities that Ukrainian officials say would be needed to push back Russian forces to positions they occupied before the invasion or beyond. The Associated Press was granted rare access Saturday to the firing of U.S.-supplied M777 howitzers on Russian positions in Ukraine’s eastern Donbas region. The powerful artillery pieces are helping Ukrainian forces reply in kind to Russian batteries that have been pounding towns and villages to rubble.

In Kyiv. the bells of St. Michael’s cathedral tolled as four soldiers carried Ratushnyi’s coffin to the memorial service Saturday morning, held outdoors in the church’s sunlit courtyard. Poppies and a traditional loaf of bread were placed on the coffin covered with Ukraine’s blue and yellow flag.

During the Maidan protests, where riot police used batons and eventually bullets with deadly abandon, Ratushnyi and Reva had taken shelter together for one night inside the cathedral grounds, the friend recalled.

“He was such a solid and big personality,” Reva said. “It’s a great loss for Ukraine.”

The friends then signed up to fight on the very first day of the Russian invasion on Feb. 24. After taking part in the defense of Kyiv in the assault’s opening weeks, Ratushnyi then joined an army brigade, doing military intelligence work, Reva said. Reva said he’s been fighting of late in positions away from where Ratushnyi was killed. Reva, 33, said two soldiers also were killed and another 15 injured Thursday where he’s been stationed.

“People get killed every day on the front line,” he said.

Ratushnyi was killed on June 9 around the town of Izyum on the war’s eastern front, according to the environmental campaign group that he led in Kyiv. He fought for the preservation from development of a wooded park where people ski in winter.

“He was a symbol, a symbol of a new Ukraine, of freedom and a new generation that wants to fight for its rights,” said Serhli Sasyn, 21.

The “best people are dying now.”

Efrem Lukatsky in the Donbas region of Ukraine, and Inna Varenytsia in Lisbon, Portugal, contributed to this report.

2022-06-18
Previous Post: Amazon and Deliveroo deepen ties with Prime food delivery bundle
Next Post: The Battlefield in Ukraine: A Kaleidoscope of Death.