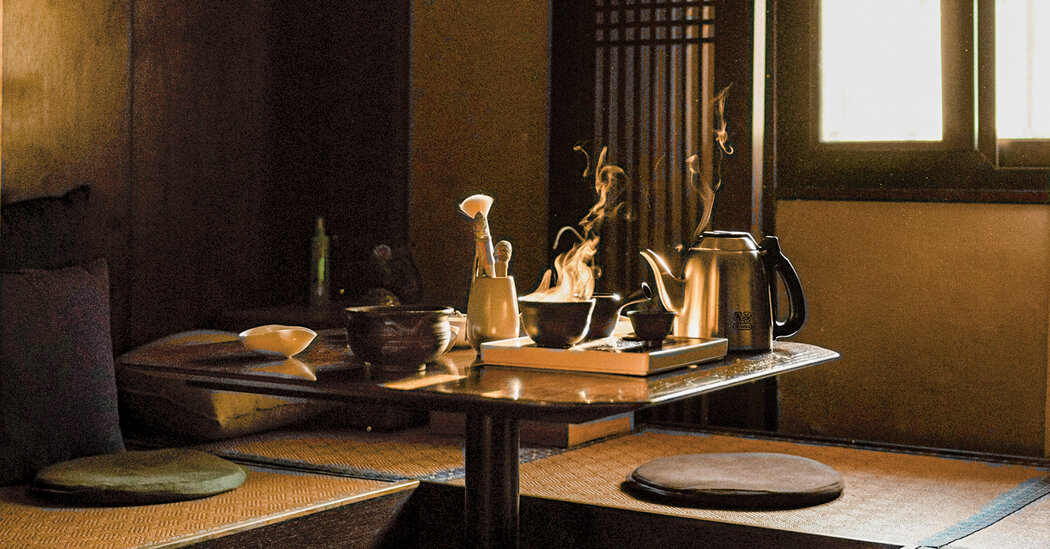 In Shanghai, Teahouses Offer Both Community and Solitude

IN SHANGHAI — CHINA’S most technologically advanced megacity — before the pandemic, De He feels subdued, far from its raucous Chengdu predecessors. There are busier spots in town, perhaps above all the tourist-besieged Huxinting Teahouse, an ornate pavilion rising on stilts over a lake of lotuses. But among the city’s thousands of teahouses, a new vanguard suggests a shift from populist engagement to retreat and refinement, whether in settings stocked with antique furniture, as at De He, or styled in a self-consciously edgy aesthetic, like the Tingtai Teahouse, in the M50 art district in the onetime industrial zone of Putuo, with its tiers of private chambers in elevated stainless-steel boxes. At some, tea sommeliers offer high-priced varieties of Bingdao Pu’er, Tieguanyin oolong and Dianhong (black tea from Yunnan Province in China’s southwest), prepared tableside. Reservations are often required, with time limits imposed, lest customers linger too long. It’s an escape, but not from time.

In “The Social Life of Small Urban Spaces,” a 1980 study on the use of public plazas in New York City, the American journalist and urban planner William H. Whyte observes that although people “speak of getting away from it all,” evidence shows that they are in fact drawn to busy places: “What attracts people most, it would appear, is other people.” Yet at the other teahouses I visit with Loh (and, later, with the food writer Crystyl Mo), encounters between strangers are kept to a minimum. Men in suits, swinging briefcases, disappear into discreet, closed-off rooms. There’s an aura of exclusivity, as at a private club; one spot, a branch of the Yinxi mini-chain on Yuqing Lu in the former French Concession, is unmarked from the outside save for a row of chubby, blank-faced monk dolls set into the wall. To enter, Loh presses down on the head of the second doll from the right, and when the door opens, we ascend steps over billowing mist. In the garden, tables stand cocooned in glass cylinders surrounded by water, reachable only by steppingstones.

With coffee shops now as their rivals — among them the mammoth 30,000-square-foot storefront of Starbucks Reserve Roastery that opened in 2017 in Shanghai’s Jing’an district — teahouses have had to adapt. Some tempt the younger generation with their interiors; others make tea the focus, with formal ceremonies requiring a skilled practitioner, or as a luxury product, with prices for particularly rare varieties rising into the thousands of yuan per pot, the equivalent of hundreds of American dollars. These modern iterations don’t quite fit the classic model of “one of the most affordable public social spaces,” as Shao has described it, and it’s difficult for an outsider to tell how much they retain the spirit of the freewheeling teahouses of old, where “ordinary folk” could gossip and express opinions and “release destructive emotions and cope with social change” without fear of consequence or government interference. Instead, they appear to embrace a different nostalgia, for an imagined time when the world was less demanding or easier to shut out. Perhaps the promise is not engagement but its opposite: retreat.