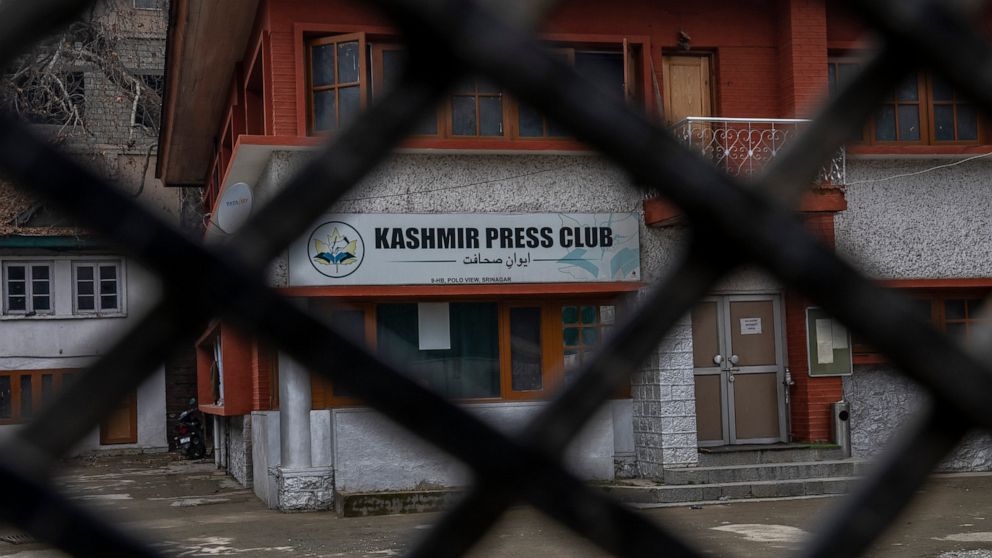 SRINAGAR, India — For five years, Sajad Gul wrote about conflict wracking his homeland, a disputed Himalayan territory where a violent armed rebellion and India’s brutal counterinsurgency have raged for over three decades.

That changed on a snowy Wednesday night in January with a knock at his house. Gul was surrounded by Indian soldiers wielding automatic rifles who bundled him into a vehicle and sped away, plowing through the snow-laden track in Hajin, a quiet village about 20 miles from Srinagar, the region’s main city, said his mother, Gulshana, who only uses one name.

Journalists have long contended with various threats in Indian-controlled Kashmir and found themselves caught between warring sides. But their situation has gotten dramatically worse since India revoked the region’s semi-autonomy in 2019, throwing Kashmir under a severe security and communication lockdown and the media in a black hole. A year later, the government’s new media policy sought to control the press more effectively to censure independent reporting.

Dozens have been arrested, interrogated and investigated under harsh anti-terror laws. Fearing reprisals, local press has largely wilted under pressure.

Gul’s arrest, which the CPJ condemned, underscored the fast-eroding press freedoms and criminalization of journalists in Kashmir.

Police told Gul’s family that he was arrested for provoking people to “resort to violence and disturb public peace.” A police statement later described him as “habitual of spreading disinformation” and “false narratives” on social media.

He was detained days after his single tweet linked a video clip of a protest against Indian rule, following a Kashmiri rebel’s killing. He spent 11 days locked up before a local court granted him bail.

Instead of freeing Gul, authorities charged him in a new case under the Public Safety Act, which allows officials to imprison anyone for up to two years without trial.

“My son is not a criminal,” said Gulshana. “He only used to write.”

Media has always been tightly controlled in India’s part of Muslim-majority Kashmir. Arm twisting and fear have been extensively used to intimidate the press since 1989, when rebels began fighting Indian soldiers in a bid to establish an independent Kashmir or union with Pakistan. Pakistan controls Kashmir’s other part and the two counties fiercely claim the territory in full.

The fighting has left tens of thousands of people dead. Yet, Kashmir’s diverse media flourished despite relentless pressure from Indian authorities and rebel groups.

That changed in 2019, when authorities began filing criminal cases against some journalists. Several of them have been forced to reveal their sources, while others have been physically assaulted.

“Authorities have created a systematic fear and launched a direct assault on free media. There is complete intolerance of even a single critical word,” said Anuradha Bhasin, an editor at Kashmir Times, a prominent English daily that was established in 1954.

Bhasin was among the few who filed a petition with India’s Supreme Court, resulting in partial restoration of communication services after the 2019 blackout, which the government had said was necessary to stall anti-India protests.

But she soon found herself in the crosshairs of Prime Minister Narendra Modi’s government.

Bhasin’s legacy newspaper office in Srinagar, operating from a rented government building, was sealed by authorities without any notice. Its staff was not allowed to take out any equipment.

“They are killing local media except those who are willing to become government stenographers,” said Bhasin.

Under Modi, press freedoms in India have steadily shrunk since he was first elected in 2014. Last year, India was ranked 142nd in the global press freedom index by media watchdog Reporters Without Borders, below Afghanistan and Zimbabwe.

Nowhere has this slide been more glaring than in Kashmir.

Authorities have pressed newspapers by chastising editors and starving them of advertisement funds, their main source of income, to chill aggressive reporting.

For the most part, newspapers appear to have cooperated and self-censored stories, afraid to be branded anti-national by a government that equates criticism with secessionism.

“We have been merely trying to keep afloat and hardly have been able to do proper journalism for various reasons, one being that we are mainly dependent on government ads,” said Sajjad Haider, the top editor of Kashmir Observer.

There have been press crackdowns in the region before, especially during periods of mass public uprisings. But the ongoing crackdown is notably worse.

Last week, a few journalists supportive of the Indian government, with assistance from armed police, took control of the Kashmir Valley’s only independent press club. Authorities shut it down a day later, drawing sharp criticism from journalist bodies.

The Editors Guild of India accused the government of being “brazenly complicit” and dubbed it an “armed takeover.” Reporters Without Borders called it an “undeclared coup” and said the region is “steadily being transformed into a black hole for news and information.”

The press club is the region’s latest civil society group to face the government’s widening crackdown. In the last two years, authorities have stopped the Kashmir High Court Bar Association and the Kashmir Chamber of Commerce from holding internal elections.

The government defended its move by citing “potential law and order situation” and “the safety of bona fide journalists.” It said the club failed to register under a new law and hold elections for a new managing body.

The club said new registration was granted by authorities after “six months of rigorous police verification” in late December, but kept in “abeyance” a day later for unknown reasons.

The government’s move ran in stark contrast with its policy in the region’s Hindu-dominated Jammu city where another press club continues to function without having held an election for nearly half a decade.

Majid Maqbool, a local reporter, said the club extended institutional support to journalists working under difficult conditions. “It was like a second home for us,” he said.

Local Kashmiri reporters were often the only eyes on the ground for global audiences, particularly after New Delhi barred foreign journalists from the region without official approval a few years ago. Most of the coverage has focused on the Kashmir conflict and government crackdowns. Authorities are now seeking to control any narrative seen opposed to the broad consensus in India that the region is an integral part of the country.

In this battle of narratives, journalists have been berated by authorities for not using the term “terrorists” for separatist rebels. Government communiques mostly appear on front pages and statements from pro-India Kashmiri groups critical of Modi’s policies are barely published.

Newspaper editorials reflective of the conflict are largely absent. Rare news reports about rights abuses are often dismissed as politically motivated fabrications, emboldening the region’s heavy-handed military and police to muzzle the press.

Some reporters have been subjected to grueling hours of police interrogation, a tactic condemned by the United Nations last year.

Aakash Hassan, an independent Kashmiri journalist who mainly writes for the international press, said he has been summoned at least seven times by Indian authorities in the last two years.

Hassan said sometimes officers would question his motives to report and “lecture me about how to do journalism the right way.”

“It is a way to dissuade us from reporting,” he said, adding that police also questioned his parents several times and probed their finances.

“Sometimes I wonder if it is worth it to be a journalist in Kashmir,” said Hassan. “But I know, silence doesn’t help.”