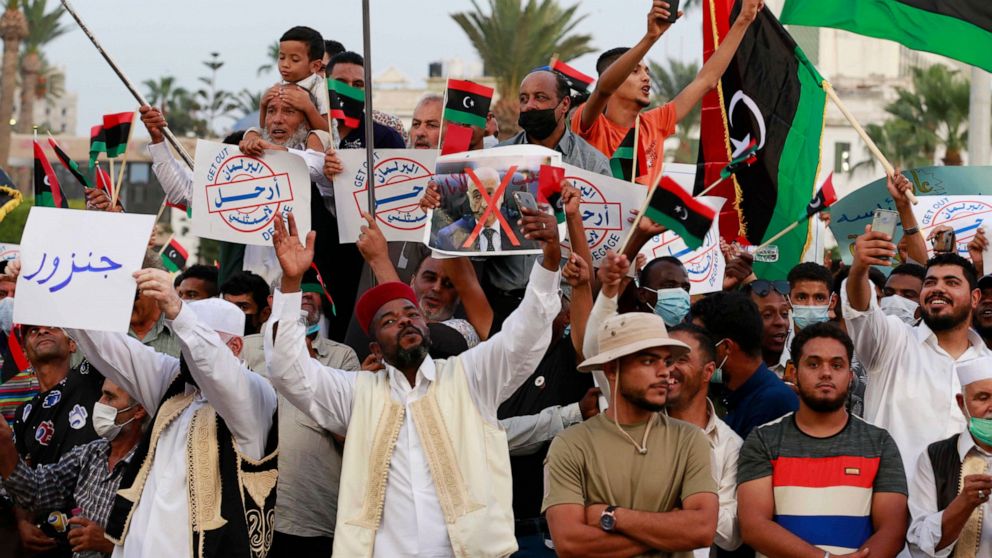 TRIPOLI, Libya — Hundreds of protesters gathered in Libya’s capital of Tripoli on Friday to oppose a decision by the country’s lawmakers to pass a vote of no-confidence in the transitional government.

The motion, passed Tuesday, represents a challenge to planned December elections and impedes efforts to unite the oil-rich North African nation after a decade of turmoil.

Protesters in a central square in Tripoli waved Libyan flags, chanting that the decision did not represent them and should be overturned. They called for members of the east-based House of Representatives to step down.

Libya’s current transitional government replaced two rival administrations — one based in the country’s east and another in the west — that had ruled Libya for years. Its main goal has been preparing the country for elections by Dec. 24. But politicians have failed to finalize elections laws dictating how the vote will be conducted.

Oil-rich Libya was plunged into chaos after a 2011 NATO-backed uprising toppled and killed longtime dictator Moammar Gadhafi. In the aftermath, the nation was split between a government in the east, backed by commander Khalifa Hifter, and a U.N.-supported administration in the capital of Tripoli. Each side has also had the support of different regional powers.

The elections have been seen by many as a step forward to end the country’s divisions. But the move by the eastern-based House of Representatives shows that tensions remain.

On Wednesday, Hifter announced he was suspending his role as leader of his self-styled Libyan army for the next three months — an indication that he may be planning to run for president in the December elections.

Meanwhile, Prime Minister Abdul Hamid Dbeibah has vowed that his government will not step down before handing over power to elected officials. The House of Representatives said, following its decision, that the current government can act as caretaker administration but gave no time frame for the appointment of another government before elections late this year.

Dbeibah, a powerful businessman from the western city of Misrata, was appointed earlier this year to lead the executive branch of an interim government that also includes a three-member Presidential Council chaired by Mohammad Younes Menfi, a Libyan diplomat from the country’s east.

International pressure is also mounting ahead of the December deadline for Libyans to head to the polls.

On Friday, the foreign ministers to France, Germany and Italy met on the sidelines of the United Nations General Assembly to discuss Libya and reaffirm their commitment to voting happening on the scheduled date, according to a UN statement. Menfi announced in a speech to the assembly that the government would hold an international conference next month on trying to keep the political process on track, without offering further details. France has announced that it will be hosting a conference on Libya in November about the elections.

2022-08-09
Previous Post: Britain Braces for Another Round of Scorching Temperatures
Next Post: Serena Williams suggests retirement from tennis after US Open