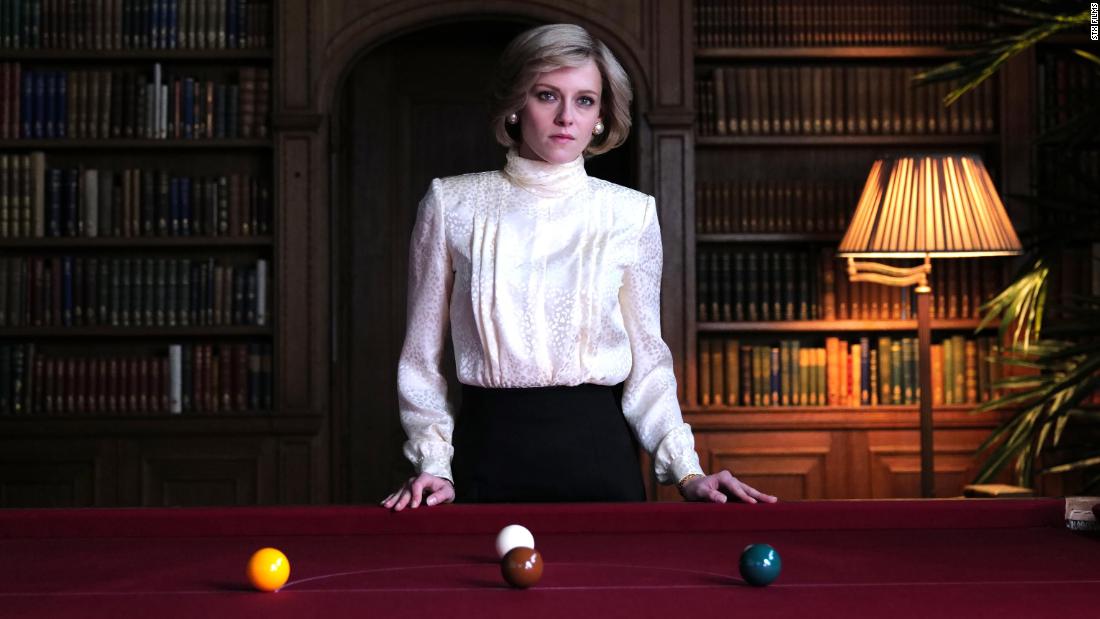 By: Daisy-May Amos
In: Uncategorized
Tagged: arts, Diana, Film, focus, How new film 'Spencer' kept Kristen Stewart's Diana in focus - CNN, Kristen, Spencer, Stewarts
With: 0 Comments
Keeping you in the know, Culture Queue is an ongoing series of recommendations for timely books to read, films to watch and podcasts and music to listen to.
Pablo Larrain’s “Spencer” gives off “The Shining” vibes long before we see two women in matching outfits walking in step down a corridor. The neat Kubrickian symmetry, the oppressive setting, the stifling presence of others, of ritual, of duty — it’s all there in Larrain’s imaginary take on Princess Diana’s Christmas from hell. Then again, the moment involving two maids is so throwaway it could also be a nothing, a phantom. It wouldn’t be the only ghost lurking in the hallways of this film.
It’s both trite and an understatement to say the royal family has never looked quite like this before. Larrain’s horror-inflected movie announces itself as a “fable from a true tragedy,” imagining three days at the Queen’s Sandringham estate in 1991. Diana and Charles’ marriage is on the rocks and “The Firm” is looking to her to right the ship over a Christmas feast or two. She, understandably, has other ideas, haunted by the women who have come before her (in more ways than one).

Kristen Stewart as Diana appears set for a long and possibly fruitful awards season run, but doing her performance justice required the careful eye of Claire Mathon, one of the hottest cinematographers working right now.

Larrain approached the French cinematographer after watching her Caesar Award-winning work in “Portrait of a Lady on Fire,” Mathon told CNN. In their initial talks about “Spencer,” Mathon said the director was interested in “something much larger and (more) timeless” than Christmas with the royals: an exploration of what lies behind life-changing decisions.

“He said from the start, it’s a fairytale (turned) upside down. It is a princess who makes the choice not to be a princess anymore,” she explained. “It’s more of a deconstruction and it’s less about history.”

Up close and personal

Visually, Larrain was inspired by Kubrick, Mathon said. She and Larrain watched Kubrick’s William Thackeray adaptation “Barry Lyndon” and a sequence of “A Clockwork Orange” in preparation for “Spencer,” and they also studied period photographs. But the film would not be tied to history or biopic convention.

Larrain’s mise-en-scène “is very far from naturalism,” Mathon said. “It’s a very choreographed film, I think, where the music is important. It’s a film where we move a lot (and) we feel a lot.”

Like “Spencer,” Mathon’s movies “Portrait of a Lady on Fire,” “Atlantics” and the upcoming “Petite Maman” all feature intimate female portraits (coincidentally, all include paranormal elements, too). None, however, have put her as up close and personal with her subject as this.

Working with 16mm film, Mathon’s camera engages in an elaborate dance with Stewart, capturing her every gesture but also the world as Diana sees it, beset with ghouls (both flesh and fantasy) and few trustworthy faces.

Some shots were improvised, others not, she said. The method veers toward the metatheatrical, given how paparazzi stalked the real Diana, camera in hand.

“I had never been as close to an actress with a camera. I was even scared of touching her,” Mathon said. “But I think that her interpretation played with the camera … It’s one of the subjects of the film: (Diana’s) relationship between hiding and locking herself away, while at the same time being in constant view — too seen. How she reveals herself (is) how she remains free.”

Diana faced with the press in “Spencer.” Credit: NEON

As if to drive home the film’s subjective perspective, even when not in close-up, Diana remains the focus. During one fraught dinner, Mathon captures events with such shallow depth of field as to blur Diana’s fellow royals into irrelevance. Instead our eyes are drawn to Stewart’s pained face, the soup before her and a pearl necklace (the same given to Camilla, Diana suspects) weighing like an anvil around her neck. Jonny Greenwood’s jazz-inspired score grates against the room’s stifling primness, and the film’s claustrophobia spins out into a wild fantasy, thrilling and disturbing in equal measure.

Mathon said the scene was among her favorites. “The music came even before the scene,” she explained. “The idea for this scene’s progression really comes from this sumptuous candlelit dinner with an orchestra … little by little, it harmonizes and transforms, it becomes dissonant.”

“We always run with (Diana), but the question is how to feel these looks; the tension of (royal) traditions. For me, visually (this) was a challenge.”

Mathon had nothing but praise for Stewart (“both very beautiful but also pretty amazing”), her director (“I had a lot of fun working with Pablo”) and also the film’s take on the princess. “I really liked the fact that there are many facets (to her), that there is something very complex in this character,” she said.

“At the end of the day, being close to (Diana) is something sincere and, ultimately, very simple.”

“Spencer” is released in cinemas November 5.

Add to Queue: The subjective lens

WATCH: “Lady in the Lake” (1947)
Robert Montgomery’s “singularly strange” adaptation of Raymond Chandler’s novel could have been like any other noir of the time, only he opted to shoot it from the protagonist’s perspective and turn it into a true first-person narrative. Montgomery, who also plays Chandler’s famous gumshoe Philip Marlowe, appears in mirrors and occasionally addresses the audience (studio MGM forced him to shoot a prologue), but otherwise it’s as if we’re seeing through Marlowe’s eyes.
Akira Kurosawa’s 1950 film starring Toshiro Mifune makes an entire plot out of subjectivity. Recounting a story of rape and murder, his characters tell the same tale three times, each version contradicting the next. The camera presents their evidence as fact, forcing the audience to unpick the truth from the lies and deceit. Kurosawa’s film lives in the pop culture firmament (even receiving the ultimate tribute in a “Simpsons” quip) and continues to inspire today, the format rearing its head in “Star Wars: The Last Jedi” and this year’s “The Last Duel.”
WATCH: “Son of Saul” (2015)

László Nemes’ harrowing film takes the opposite tact to Montgomery’s, in that the camera barely leaves the protagonist’s face. Nemes’ debut feature, about a Hungarian Jew in Auschwitz forced to dispose of bodies and clean the camp’s gas chambers, is shot in a boxy Academy ratio, forcing the audience to concentrate on Saul (played by Géza Röhrig). Shot in close-up and frequently in tight focus, we process events through Saul’s reaction to them, shielded to a degree from the visual horrors but not their emotional impact.

Just as film can take a subjective view of events, so can film history. Helen O’Hara’s book does a fantastic job of undoing the erasure of film’s pioneering women, reclaiming the narrative in their name. Packed with eye-opening anecdotes from the days of Old Hollywood, O’Hara makes the case for these women, marginalized by the studios and the history books, without whom we wouldn’t have cinema as we know it.

WATCH: “Cameraperson” (2016)
Kirsten Johnson shot other peoples’ films long before she broke through as a director in her own right. Before she made “Dick Johnson Is Dead,” she made “Cameraperson,” a documentary that recalibrates our understanding of what it means to stand behind the camera. The film is composed of footage from previous projects for other directors (Johnson has operated cameras for Michael Moore and Laura Poitras) as well as home footage, edited into a visual memoir. Johnson questions the ethics of documenting life through a lens, while providing ample evidence of the profound human connection afforded by the medium. It’s a considered and compelling manifesto.
2022-11-26
Previous Post: Military Can’t Find ISIS Safe House That Prompted Kabul Drone Strike
Next Post: With Tears, Hugs and Balloons, US Allows Vaccinated Foreign Travelers to Enter