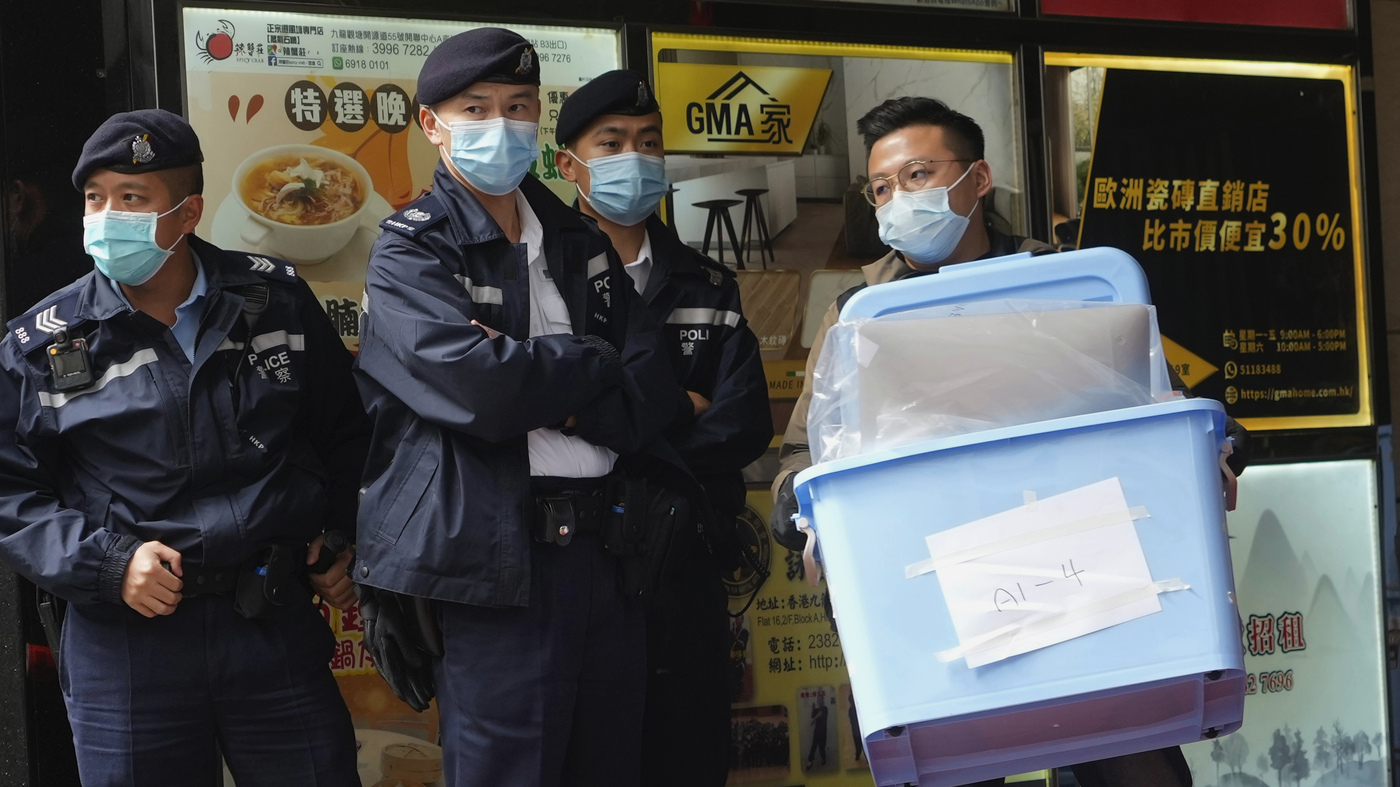 Hong Kong police raided the office of the online news outlet Stand News on Wednesday after arresting several people for conspiracy to publish a seditious publication. The website shut down hours later.

Hong Kong police raided the office of the online news outlet Stand News on Wednesday after arresting several people for conspiracy to publish a seditious publication. The website shut down hours later.

HONG KONG (AP) — A vocal pro-democracy website in Hong Kong shut down Wednesday after police raided its office and arrested six current and former editors and board members in a continuing crackdown on dissent in the semi-autonomous Chinese city.

Stand News said in a statement that its website and social media are no longer being updated and will be taken down. It said all employees have been dismissed.

The outlet was one of the last remaining openly critical voices in Hong Kong following the shuttering of the Apple Daily newspaper, which closed after its publisher, Jimmy Lai, and top editors were arrested and its assets frozen.

Police raided Stand News’ office earlier in the day after arresting the six, including popular singer and activist Denise Ho, a former board member, on charges of conspiracy to publish a seditious publication.

More than 200 officers were involved in the search, police said. They had a warrant to seize relevant journalistic materials under a national security law enacted last year.

The six were arrested under a crime ordinance that dates from Hong Kong’s days as a British colony before 1997, when it was returned to China. Those convicted could face up to two years in prison and a fine of up to 5,000 Hong Kong dollars ($640).

Police did not identify who was arrested, but Hong Kong’s South China Morning Post newspaper reported they were one current and one former editor of Stand News, and four former board members including Ho and former lawmaker Margaret Ng.

A Facebook post early Wednesday morning on Ho’s account confirmed that she was being arrested. A subsequent message posted on her behalf said she was OK and urged friends and supporters not to worry about her.

Early Wednesday, Stand News posted a video on Facebook of police officers at the home of a deputy editor, Ronson Chan. Chan, who is also chair of the Hong Kong Journalists Association, was taken away for questioning, the organization confirmed in a statement.

The arrests come as authorities crack down on dissent in the semi-autonomous Chinese city. Hong Kong police previously raided the offices of the now-defunct Apple Daily newspaper, seizing boxes of materials and computer hard drives to assist in their investigation and freezing millions in assets that later forced the newspaper to cease operations.

Police charged the Apple Daily’s Lai, who is already jailed on other charges, with sedition on Tuesday.

Stand News earlier this year said it would suspend subscriptions and remove most opinion pieces and columns from its website due to the national security law. Six board members also resigned from the company.

The journalists’ association urged the city’s government to protect press freedom in accordance with Hong Kong’s mini-constitution, the Basic Law.

“The Hong Kong Journalists Association (HKJA) is deeply concerned that the police have repeatedly arrested senior members of the media and searched the offices of news organizations containing large quantities of journalistic materials within a year,” it said in a statement.

Benedict Rogers, co-founder and CEO of the non-governmental organization Hong Kong Watch, said the arrests are “nothing short of an all-out assault on the freedom of the press in Hong Kong.”

“When a free press guaranteed by Hong Kong’s Basic Law is labeled ‘seditious,’ it is a symbol of the speed at which this once great, open, international city has descended into little more than a police state,” he said.

Wednesday’s arrests also followed the removal of sculptures and other artwork from university campuses last week. The works supported democracy and memorialized the victims of China’s crackdown on democracy protesters at Beijing’s Tiananmen Square in 1989.