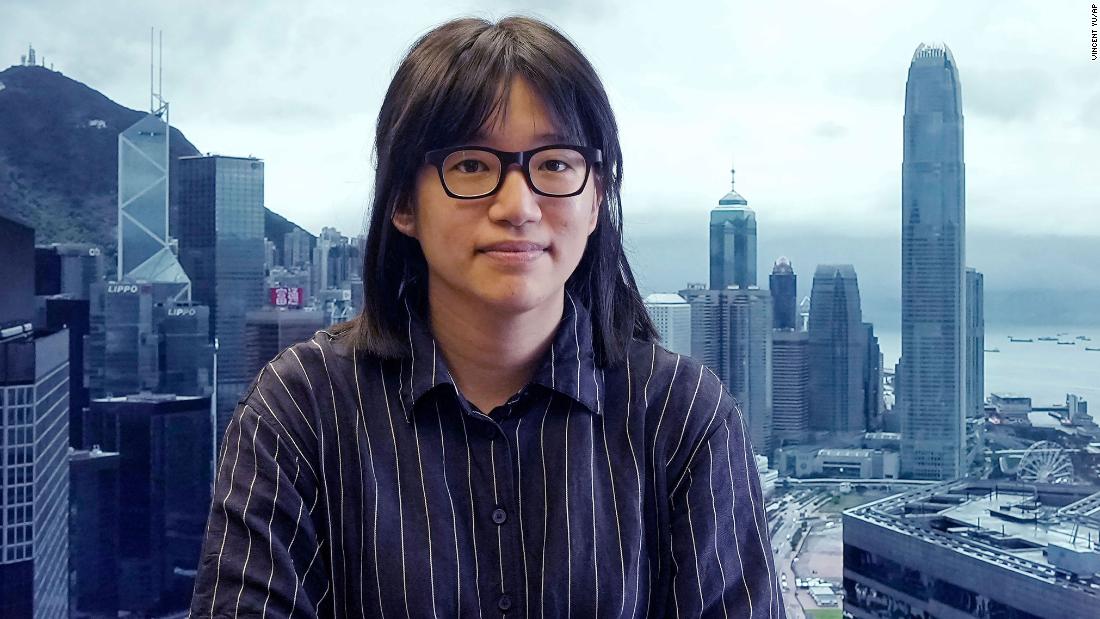 Chow is a former vice chairwoman of the now-disbanded organization Hong Kong Alliance, which since 1990 has held an annual candlelight vigil on the anniversary of the bloody military crackdown. This is her second conviction for organizing banned Tiananmen vigils.

For three decades, Hong Kong has been the only place on Chinese-controlled soil allowed to publicly commemorate the events in and around Tiananmen Square, during which unarmed mostly student protesters were brutally suppressed by Chinese troops.

But for the past two years, the city’s police have banned the event, citing Covid-19 restrictions. Despite the ban, small crowds continued to show up and light candles in 2020, and again in 2021.
Chow was arrested on the morning of June 4 last year and later charged with “incitement to knowingly take part in an unauthorized assembly,” a crime she was found guilty of Tuesday.

According to court documents, in the months leading up to the anniversary, the Hong Kong Alliance submitted a “Notification of the Intention to Hold a Public Meeting/Procession” to the city’s police. Their request was rejected, appealed, and then rejected again by police, who cited public health and safety concerns.

Despite the police’s decision, Chow posted on her social media pages calling on residents across Hong Kong to light a candle in remembrance of the massacre, the documents said.

The court also cited an article Chow allegedly wrote on the anniversary, titled “Candlelight carries the weight of conscience and the Hong Kong people persevere in telling the truth,” published in the local Ming Pao newspaper.

Chow, a barrister, represented herself in court and pleaded not guilty to the charge, arguing that appealing to the public to light candles did not constitute “incitement.” She also challenged the police prohibition order on the grounds it undermined her right to freedom of assembly and argued that she appealed for candles to be lit “anywhere” across Hong Kong, and was not encouraging a rally.

In her judgment, the magistrate wrote that Chow had “overstepped the boundaries laid down by the law by seriously unlawful means of inciting others to knowingly take part in an unlawful assembly.”

Chow was already serving a 12-month sentence for her role in organizing the 2020 Tiananmen vigil. The two sentences will run concurrently, meaning she will now serve an additional 10 months in prison.

She was also among four activists from the Hong Kong Alliance arrested in September last year after the group refused to comply with a police order to submit information on national security grounds.

The Tiananmen crackdown remains one of the most tightly censored topics in mainland China with all mention of it scrubbed from mass media. Chinese authorities have not released an official death toll, but estimates range from several hundred to thousands.

After Hong Kong’s 1997 handover from British to Chinese control, the continuation of the vigil and similar memorials were seen as a litmus test for the city’s autonomy and democratic freedoms, as promised in its de facto constitution.

But the city’s political and social landscape has transformed with incredible speed since Beijing imposed a sweeping national security law in 2020, punishing offenses such as subversion and secession with sentences of up to life in prison.

Under the legislation, activists, journalists and pro-democracy lawmakers have been arrested; newsrooms have been raided and forced to shut down; textbooks, films and websites face new censorship; and civic organizations including labor unions have folded after pressure from authorities.

Even statues commemorating Tiananmen have been targeted. The “Pillar of Shame” sculpture, an iconic memorial to the Tiananmen victims that has long stood in the University of Hong Kong, was removed under the cover of darkness last month. The university said the removal “was based on external legal advice and risk assessment.”

The Hong Kong government has repeatedly refuted accusations the security legislation has stifled freedoms, claiming it has instead restored order in the city after it was shaken by mass protests from 2019.