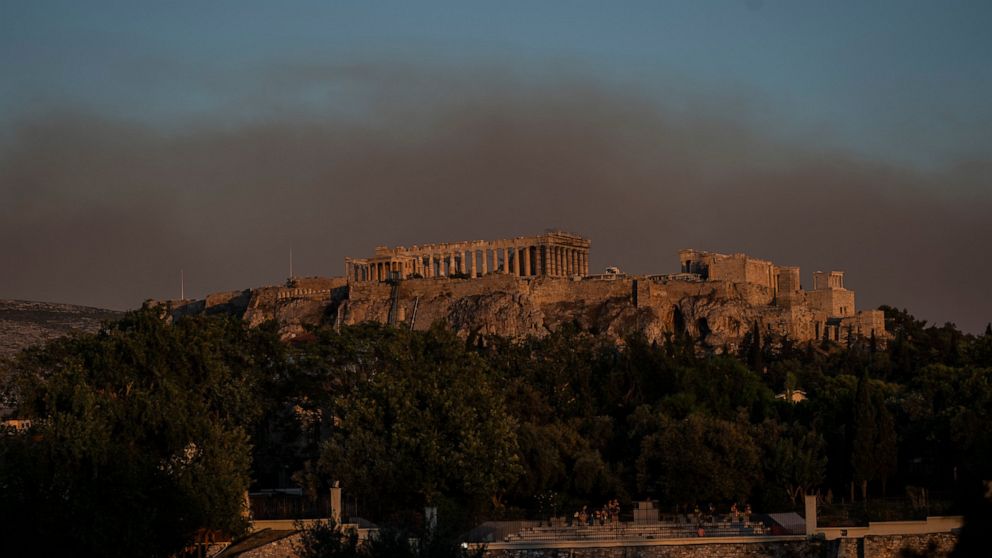 DRAFI, Greece — Hundreds of people were evacuated from their homes late Tuesday as a wildfire threatened mountainside suburbs northeast of Athens. Firefighters battled through the night, struggling to contain the blaze which was being intensified by strong gusts of wind.

The Fire Service said 15 planes and nine helicopters were involved in the firefighting effort on the slopes of Mount Penteli, 25 kilometers (16 miles) northeast of Athens before being grounded at nightfall.

Police officers and firefighters carried elderly residents out of their homes to safety as the flames approached.

Huge clouds of smoke from the blaze was visible in central Athens.

Local officials said homes had been burned or damaged but there were no reports of injuries or stranded people. A children’s hospital in the area was also evacuated, officials said.

Greece has been spared the heat wave conditions currently plaguing countries in western Europe, but fire officials say that hot and dry conditions persisting for weeks as well as longer term temperature rises have increased the overall risk of forest fires.

More than 1,300 square kilometers (500 square miles) of land was damaged by wildfires in Greece last year, the worst damage recorded since 2007.

“Its’s been a tough day,” the spokesman said, adding that more than 400 firefighters had been deployed. Some 300 police officers were also on duty to enforce traffic bans and patrol evacuated areas to prevent looting, officials said.

Evangelos Bournous, mayor of Rafina, a town near the fire, said firefighters were trying to protect property until planes and helicopters could again be used at first light.

“The flames get between the hills and form a tunnel of fire. That’s very difficult to stop and it’s not affected by the wind,” Bournous told state-run television. “At night time, it’s essentially an uncontrollable situation.” ——— Gatopoulos reported from Athens, Greece

2022-07-19
Previous Post: Parents May Hesitate to Vaccinate Younger Children Against Covid
Next Post: Climate change was supposed to be a big issue this election. It wasn’t.