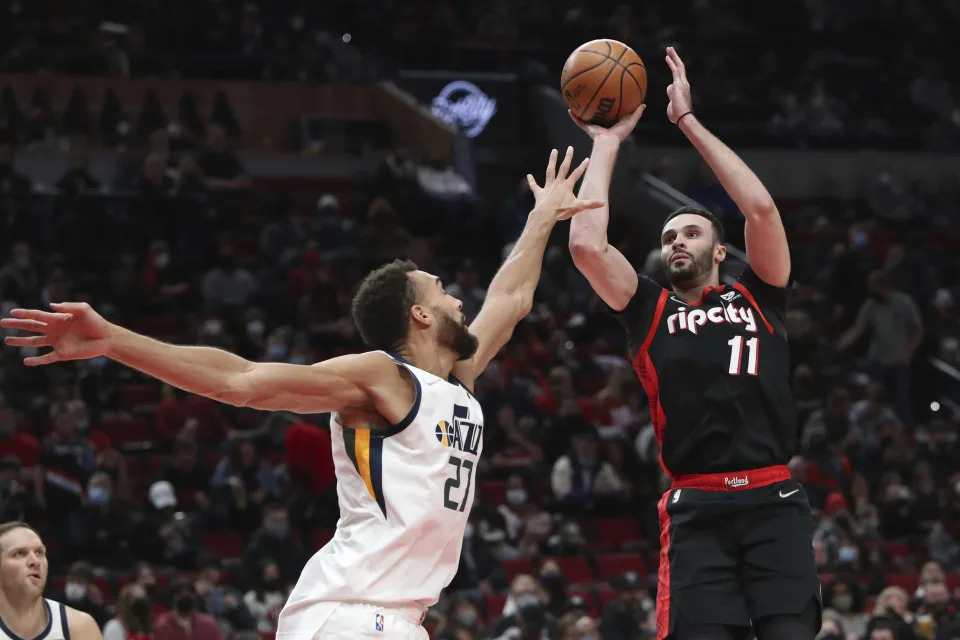 PORTLAND, Ore. (AP) Rudy Gobert had 22 points and 14 rebounds, and the Utah Jazz beat the Portland Trail Blazers 120-105 on Wednesday night with star Donovan Mitchell out with a sore back.

Portland’s Damian Lillard and Norman Powell each scored 32 points. The Trail Blazers were missing seven players in the NBA’s COVID-19 health and safety protocols for the second straight game.

Utah’s dominance started on the inside and continued all night long, outscoring Portland 74-30 in the paint.

”You can credit Rudy Gobert with this, he’s been stronger with the ball,” Snyder said of his star big man, who was 8 for 10 from the field. ”He’s been strong with the catch and then worrying about scoring after the catch. He’s also getting to the line more.”

Utah’s Hassan Whiteside had 15 points and 11 rebounds off the bench, while reserve forward Rudy Gay pitched in 21 points.

”Just the size was overwhelming for us, but I did like that we competed,” Lillard said of his team’s play. ”But obviously, there was only so much that we could have done about that.”

”When you’re on the road, it feels like more of a mission,” Gobert said. ”Sometimes when you are at home you get a little bit more distracted and it’s not as good. We have to take more advantage and we have to look fresher at home.”

Powell was key to keeping the Blazers close, scoring 25 of his 32 points in the first half. Powell’s 25 points marked the highest-scoring half by a Blazer this season, but the outside shooting wasn’t enough to overcome Utah’s success around the basket.

Lillard’s 3-pointer cut Utah’s lead to 76-70 with 7:32 remaining in the third quarter, the closest Portland had been since the first half.

A 3-pointer by Portland’s Tony Snell at the halftime buzzer cut Utah’s lead to 69-59 after the Jazz led by 16 during the first half.

With Utah up 111-91 with 4:59 left in the game, Lillard was called for a technical foul. He was then subbed out for the remainder of the game.

The Blazers have signed four new players to 10-day hardship contracts during the NBA’s current wave of players entering COVID-19 protocols. Lillard has tried to focus on welcoming those new teammates despite Portland’s place in the standings.

”The first day that they got here, it was like, I could be upset and frustrated that our team is going through this, but I put myself in their shoes,” Lillard said.

”This is a opportunity of a lifetime regardless of how long it lasts. They’re going to say `I played in the NBA. I was in a locker room with Dame,’ and I want that experience to be a positive experience.”

Jazz: Normally known for his scoring, Jazz guard Jordan Clarkson has averaged over five assists per game in Utah’s last three, which his coach believes is a response to the outside shooting struggles for the NBA’s reigning 6th Man of the Year. ”I think the biggest thing for Jordan is he hasn’t shot the ball as well as he has. That’s something that happens when you’re a good shooter and you can’t help but ask the question, is that he’s really tried to throw himself into other parts of the game.”

Trail Blazers: With starting center Jusuf Nurkic and reserve big man Cody Zeller among the seven Portland players in the protocols, the Blazers added some size by signing 6-foot-8 Reggie Perry to a 10-day contract. ”He’s played a little and has experience. It’s not going to be new to him playing in an NBA game,” Blazers acting coach Scott Brooks said. Perry had four points and three rebounds in 14 minutes of action.