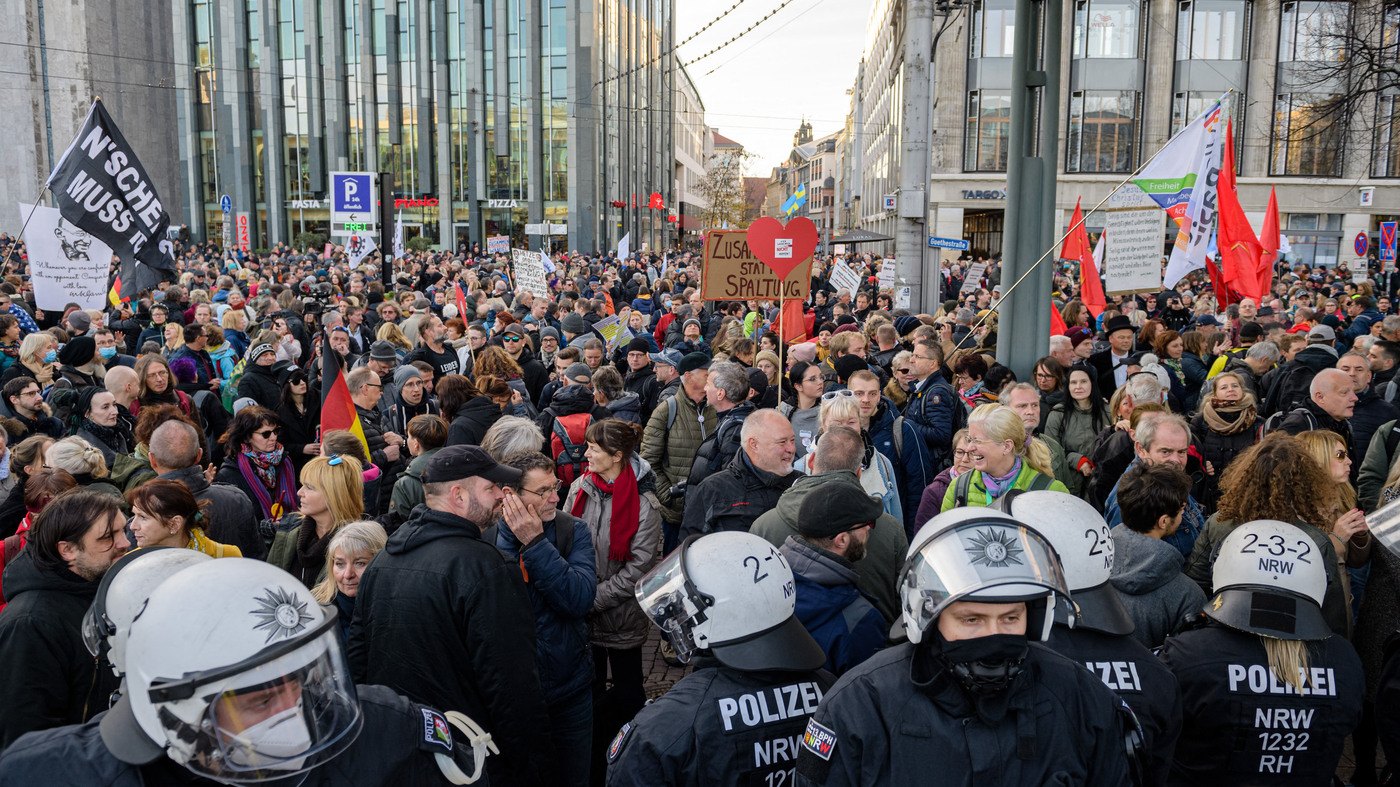 Police stand in front of protesters during a demonstration of Germany’s “Querdenker” (Lateral Thinkers) movement in November, in Leipzig, eastern Germany.

Police stand in front of protesters during a demonstration of Germany’s “Querdenker” (Lateral Thinkers) movement in November, in Leipzig, eastern Germany.

German police confiscated weapons during raids in the eastern cities of Dresden and Heidenau on Wednesday in connection with an alleged plot by radical anti-vaccination activists to kill Saxony’s governor.

Members of a group calling itself “Dresden Offlinevernetzung,” or Dresden offline network, had discussed killing state premier Michael Kretschmer on the online platform Telegram, according to police.

Both Dresden and the nearby small town of Heidenau are located in the country’s state of Saxony, which was once part of communist East Germany. The region has among the lowest vaccine rates and highest number of COVID-19 infections in the country.

Police said they targeted five members of the Telegram group and that after searches of the sites “the initial suspicion was confirmed.”

A spokesman for the State Criminal Police Office (LKA) Saxony said five residences and one workplace were searched and that police confiscated weapons, parts of weapons and crossbows, according to Süddeutsche Zeitung.

The raids follow protests against new COVID-19 restrictions and plans to make vaccinations mandatory for people working in hospitals, nursing homes and other medical practices beginning in March. The protests are supported by the far-right Alternative for Germany party (AfD), which enjoys considerable support in Saxony, according to Deutsche Welle.

The alleged plot against Kretschmer also follows death threats against other German politicians over COVID-19 policies, as well as the country’s head of infectious diseases.

Nearly 107,000 people in Germany have died since the start of the COVID-19 pandemic, and since late October the country has seen a dramatic spike in infections and deaths from the virus.

In his first major address to Germany’s parliament, the Bundestag, Chancellor Olaf Scholz said the country was fed up with anti-vaccine radicals.

“We will not put up with a tiny minority of uninhibited extremists trying to force their will on our entire society,” he said.