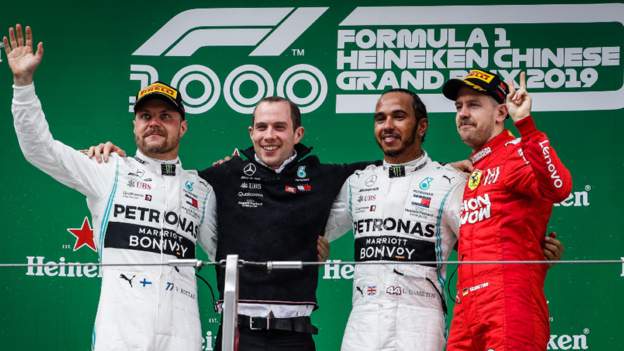 Formula 1: Chinese GP to be cancelled because of the country’s Covid policies

China’s return to the Formula 1 schedule will be cancelled next year as a result of the country’s Covid policies, BBC Sport has learned.

China’s zero-Covid policy has led F1 to conclude the race cannot go ahead.

The key sticking point is that F1 staff would not be given exemptions from quarantine requirements in the event of suffering a Covid-19 infection.

F1 feels that it cannot ask teams to go to the country for the race in Shanghai with the risk that staff could be detained for days if they caught coronavirus.

China’s latest rules demand that anyone found with Covid-19 must spend five days at an isolation centre plus three days isolation at home.

F1 chairman and chief executive officer Stefano Domenicali has not yet officially called off the race, but the decision is considered an inevitability.

The sport is not expected to seek to replace China with another race, so the calendar will be cut to 23 races – still an all-time record but one event fewer than F1 had originally planned.

China’s cancellation will leave a four-week gap in the 2023 schedule between the Australian Grand Prix in Melbourne on 2 April and the Azerbaijan Grand Prix in Baku on 30 April.

Domenicali is said to be holding talks with authorities in Baku in an attempt to persuade them to move the race forward a week to 23 April, but is meeting resistance.

If Baku cannot be persuaded to move, it is expected that the gap will be left unfilled.

F1 is also in talks to extend Azerbaijan’s race contract, which is due to end next year.

F1 had been expected to drop the race to make way for other new entrants, such as the planned race at Kyalami in South Africa.

But Azerbaijan, which pays one of the largest fees of any race, is expected to sign a new 10-year deal.

Which races will be sprints?

F1 has been fine-tuning its analysis of which tracks are best suited to hosting sprint events – which feature a shorter race on Saturdays to set the grid for the main grand prix – and is close to settling on the six races that will host them in 2023.

F1 had wanted to host a sprint event in Saudi Arabia, the second race of the season on 17-19 March, but Saudi authorities have baulked at the fee being demanded.

However, the idea of a sprint being held at the event in Jeddah has not been ruled out. If talks resume and an agreement is reached, it would be likely to replace Qatar.

The number of sprint events held is doubling next year because F1 is keen on them as they increase revenue and television audiences.