By: Associated Press
In: Uncategorized
With: 0 Comments 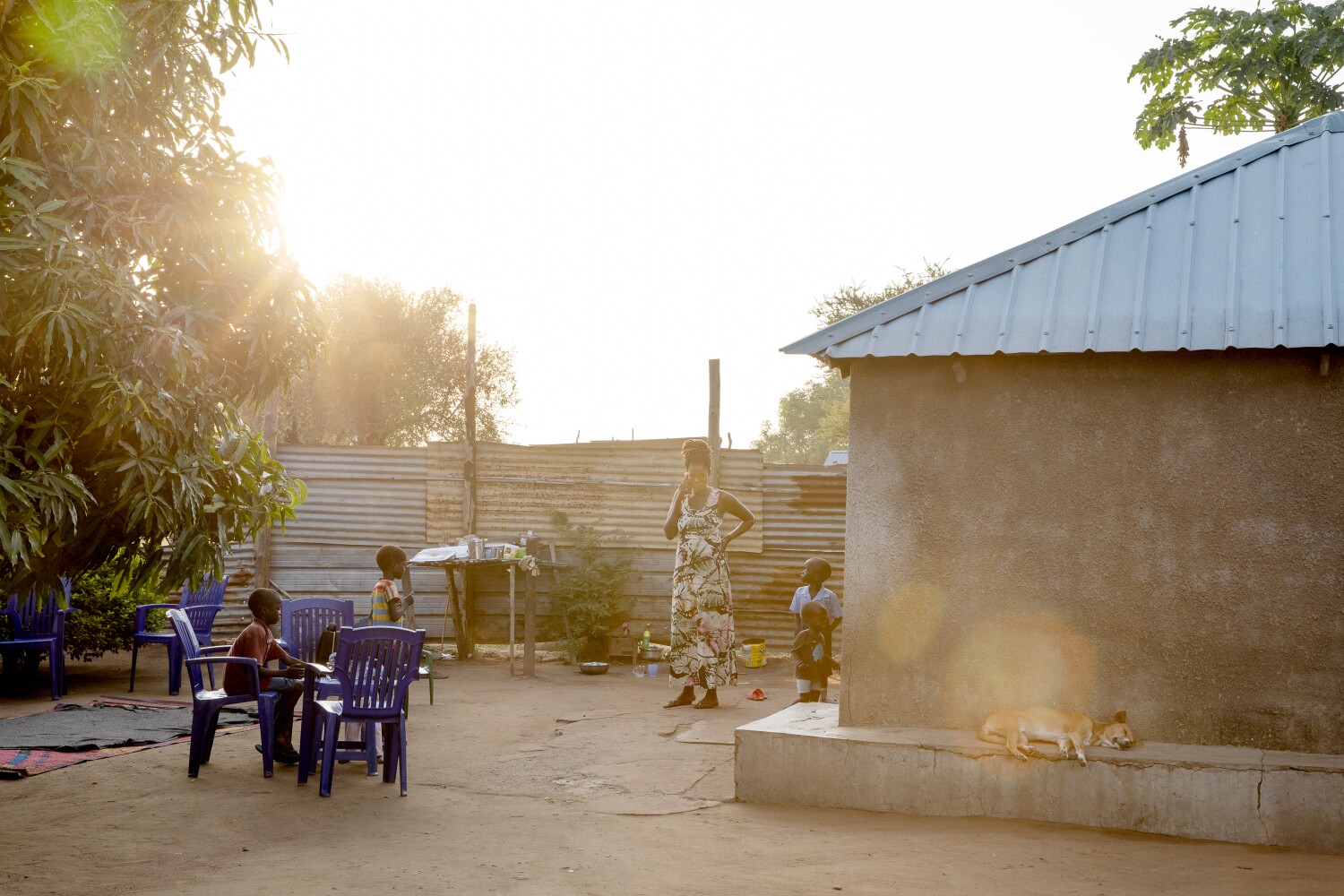 Paska Itwari Beda knows hunger all too well. The young mother of five children — all of them under age 10 — sometimes survives on one bowl of porridge a day, and her entire family is lucky to scrape together a single daily meal, even with much of the money Beda makes cleaning offices going toward food. She goes to bed hungry in hopes her children won’t have to work or beg like many others in South Sudan, a country only a decade old and already ripped apart by civil war.

But the pandemic scares Beda in ways that even hunger doesn’t.

In South Sudan, lives are built and teeter on the edge of uncertainty. A peace deal to end the civil war lags far behind schedule. Violence erupts between ethnic groups. Corruption is widespread. Hunger haunts more than half the population of 12 million people. And even the land doesn’t guarantee solid footing, as climate change sparks flooding in swaths of the country.

Yet many women say it’s the pain of the pandemic they feel most — a slow-moving disaster, in contrast to the sudden trauma of war and its fallout of famine — as they try to hold families together in what is already one of the world’s most difficult places to raise children.

With COVID-19 came the shrinking of humanitarian aid, a lifeline for many in South Sudan, as faraway donors turned attention and funding toward their own citizens instead. Closed borders cut off imports, and the oil sector on which the economy largely relies was hit hard by a crash in global prices. A lockdown wiped out the informal, untaxed labor and other work that many South Sudanese relied on for their daily meal.

And the pandemic has only exacerbated South Sudan’s widespread hunger. As the country marks a decade of independence this month, the United Nations warns that there are “more children in need of urgent humanitarian assistance than ever before.” More than 1 million are expected to face acute malnutrition this year, more than during the civil war, and the country has the highest proportion of out-of-school children in the world, about 2.8 million.

Beda, now 27, delivered her youngest children, twin girls, just weeks before coronavirus arrived in Africa. Along with the closing of borders and other pandemic restrictions, prices began rising for basic items such as cooking oil. Schools closed, and the paychecks for teachers — including Beda’s husband, who had long supported the family with his steady salary — abruptly stopped.

The family, like many in South Sudan, was suddenly without its breadwinner. To meet this stark new reality, even children younger than 10 were sent to work or to panhandle. Girls barely in puberty were married off — one less person to feed as the family received money or cattle in return.

Beda told herself she wouldn’t allow her own children to become part of what some see as a lost generation in South Sudan, entrenched in poverty without education. She found a job outside the family compound and commutes an hour each way to an office in the capital, Juba — a rare move for a woman in parts of this largely conservative country. As a cleaner, she makes 16,000 South Sudanese pounds a month, or about $35. She earns additional money by making cupcakes to sell in her office building.

But the money doesn’t buy much. Inflation hollowed out Beda’s earnings, even when combined with her husband’s salary once schools reopened. Before the pandemic, Beda said, 100 pounds “could get you something,” but now 1,000 or even 1,500 “won’t do anything.” The cost of white sorghum, a staple food, rose by 50% to 1,500 South Sudanese pounds for 3.5 kilograms, nearly 8 pounds, in just six months.

Beda tries to not dwell on her family’s situation before COVID-19. But she remembers: “Before corona, life was good.”

Then, Juba was a refuge of sorts. Beda was able to stay home and raise the three children she had before the twins arrived, thanks to her husband’s pay and the humanitarian food aid that supplemented it — South Sudan received $1.1 billion in funding in 2019.

At their compound near a military base, Beda’s family — including her father- and mother-in-law — ate three meals a day. Potable water was delivered to their home, a relative luxury in a country where many women carry containers long distances from wells or rivers.

Now, Beda wakes before dawn for the morning routine of getting her family out the door. Her older children, slender under their schoolbags, climb onto their father’s motorbike and disappear into Juba’s streets to attend school — where the fees for attendance have risen. Beda then commutes to work while the twins stay with extended family.

The family’s water deliveries dried up with the savings. So, with the help of her children, Beda now hauls water herself. They walk to the well several times a week, where she heaves a plastic container onto her head. She tries to keep it steady, though stray rivulets run down her neck, past small metal earrings that say “Jesus.”

Beda constantly watches her children for any sign of illness. Medical care was easier before the coronavirus outbreak. Medicines once available at the government hospital are hard to find now. And hospital services are no longer free because of the pandemic’s economic toll.

When the children fall ill, Beda might choose to save money and rely on herbal remedies. But recently one of the twins came down with a cough and fever — serious enough for a hospital visit. She received medicine, but Beda hasn’t been able to take her back for follow-up care.

South Sudan’s local health centers were never prepared to deal with an outbreak as widespread as COVID-19. They’re seeing infections rise as countries across Africa grapple with a wave of increasingly dangerous cases. Overall, the country has had more than 10,000 confirmed coronavirus cases, but that number is probably an undercount because of a lack of testing. Oxygen, intensive-care beds and other critical supplies are scarce, even in the capital.

South Sudan has received a fraction of the vaccines it needs, 60,000 doses so far, according to the Africa Centers for Disease Control and Prevention. Like much of Africa, the country will have to wait months, probably well into next year, to receive substantially more.

Beda is among those unvaccinated in her community. There, she has become a role model: She found a job in a country where women make up less than half of the workforce. Beda demonstrated independence, and her neighbors look to her as a leader.

They have bonded through the hardships of COVID-19. With resources scarce, Beda and nine women formed a group that meets and contributes two of the barest necessities for warding off hunger and illness: money and bars of soap.

They gather weekly, pooling supplies and handing them out to a different family every time. Over coffee, they share advice. They are from different ethnic groups — a counterpoint to the tensions of the civil war — and say the group is a reflection of their shared trust.

At first, they acknowledge, they didn’t take COVID-19 seriously. They already faced the relentless pressures of just getting by in South Sudan. But as they saw the virus killing thousands in countries near and far, depression spread and frustrations at home grew, until the women decided to form the group — first to help themselves, then others.

“It will help to save us,” said one member, Margaret Peter. “You cannot do anything alone. How will you manage to save lives if you are alone?”

Beda’s twins have known life only in the pandemic. They can now stand, they cling, they speak. Yet they’re still so small that each can curl up in a bucket in the family courtyard and peek over the brim.

Beda wants more for them than she had for herself. She witnessed five years of civil war that killed an estimated 400,000 people. She carries a scar where a bullet struck her arm when she was young during the liberation movement. In the chaos of the conflict, she never finished her schooling, instead becoming pregnant with her first child.

Beda is determined. She vows that she won’t stop working or fighting. She will forge on with her roles as a helper in her community and as her children’s protector and provider. Each Friday, when the women’s gathering breaks up, the twins rush to Beda to breastfeed, nestled against each other.