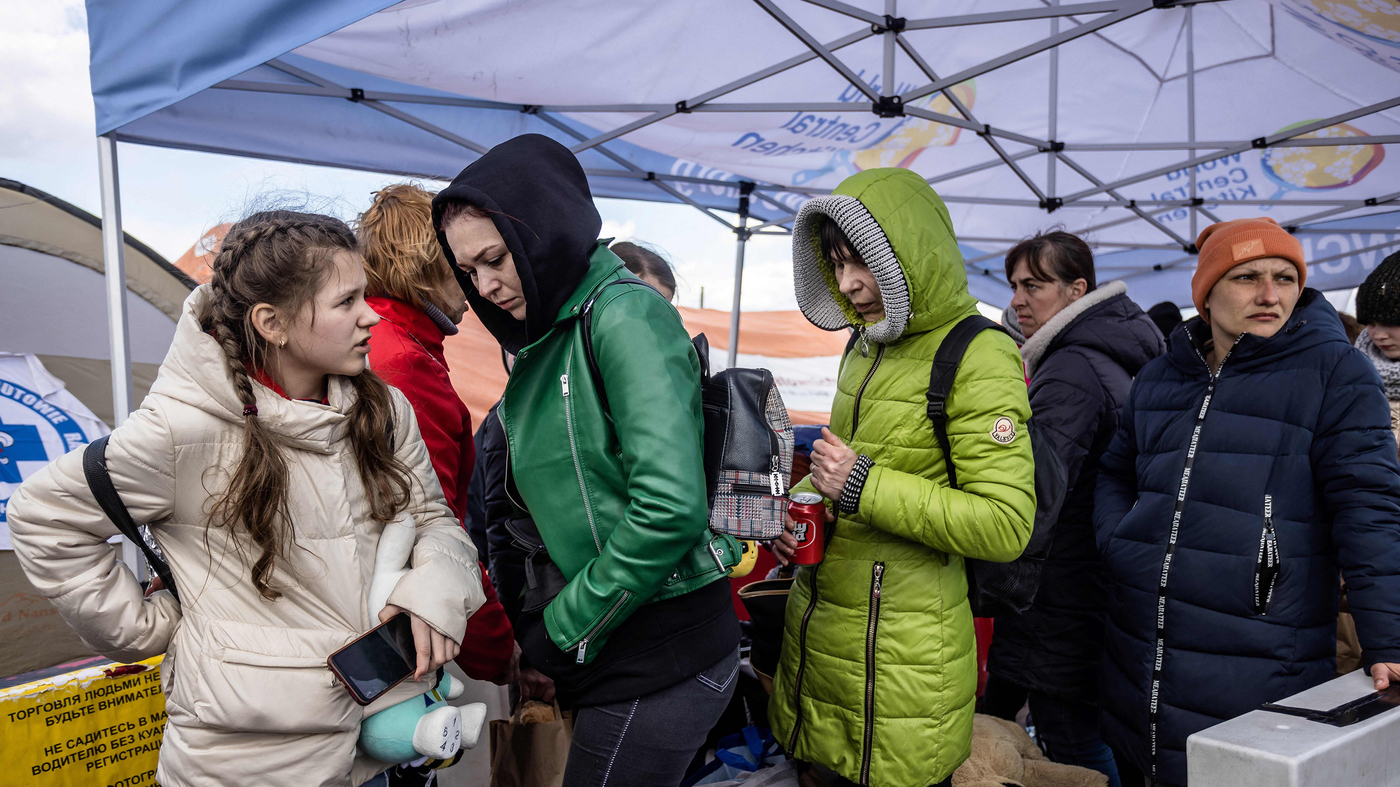 Hanna “Anya” Antoniuk, 22, fled her home in Kryvyi Rih, Ukraine, after the Russian invasion. After she crossed into Poland, she saw a column of men offering rides. “No way I would have gotten into a strange man’s car,” she says. She was relieved to find a female-only carpooling service instead.

Hanna “Anya” Antoniuk, 22, fled her home in Kryvyi Rih, Ukraine, after the Russian invasion. After she crossed into Poland, she saw a column of men offering rides. “No way I would have gotten into a strange man’s car,” she says. She was relieved to find a female-only carpooling service instead.

PRACE MALE, Poland — When 22-year-old Hanna Antoniuk arrived on the Polish border, one of the first things she noticed was all the men offering rides.

She had fled Ukraine alone. It was night. And the scene made her nervous.

“It’s an unknown, unfamiliar country, unknown men. You don’t know the language, and you don’t know what can happen at all,” she says.

Most of the 5 million Ukrainians who have fled the Russian invasion are women and children. Human rights monitors say they are vulnerable to sex and labor traffickers.

Elzbieta “Ella” Jarmulska, a 39-year-old project manager and board-game developer, sensed this too as she was standing in the crowd at the reception center that night early last month. She had driven from her home in Prace Male, a town just outside Warsaw, the capital.

She squeezed inside to see Ukrainian women and children waiting inside. Outside were the men, all holding handwritten signs with the names of cities.

“Twenty, 30 guys, big guys by the way, standing together in a group,” she recalls. “I mean, I wouldn’t feel comfortable walking up to them and saying, ‘Oh, which one of you gentlemen will take me for free around Poland?’ “

She says most of the men were probably harmless, adding that “many very good guys” are driving displaced Ukrainians from the border. But she also imagined seeing them through the eyes of Ukrainian women who had just fled violent Russian troops.

“It’s about the anticipation of danger,” she says. “That you think, ‘What will happen? What is next? A second ago, they bombarded my town. They killed people. And now I’m supposed to get into a car with a strange man?’ “

Less than an hour later, Jarmulska was driving Antoniuk, two other Ukrainian women and a Ukrainian girl to Warsaw. The drive takes more than four hours, and Antoniuk remembers how they passed the time trying to talk through Google Translate.

“We talked about a lot of things. We even have an inside joke with Ella about a bad translation involving a cow,” Antoniuk says. “We started laughing out loud, the whole car.”

In the weeks since then, Jarmulska has driven dozens of displaced Ukrainian women around Poland. And after a callout on Facebook, she has recruited scores of drivers, all women, to form an organization called Kobiety za Kolko, or Women Take the Wheel. The drivers make regular trips to the border to transport Ukrainian women and their families to homes or shelters.

A sign for Kobiety za Kolko (Women Take the Wheel) on a vehicle reserved for giving rides to Ukrainian refugees.

“A war, a crisis can bring out beautiful things in people, and it can also bring out not-so-beautiful things,” says Joanna Garnier, project coordinator at the Warsaw chapter of La Strada, an organization fighting human trafficking in Europe. “It also brings out those who want to exploit those seeking some kind of hope or a lifeline.”

“I think it’s the most popular phone number in Poland right now,” she says, not entirely joking. “The women — they are Ukrainian — they are asking about suspicious requests, like opportunities to go to America or proposals to work in the Emirates or Turkey or Mexico. And offers of accommodation or transportation. The decisions taken can be risky.”

It’s not just men who exploit the situation. Women have also fronted trafficking operations, according to Karolina Wierzbicka of Homo Faber, a Polish human rights organization in the eastern city of Lublin.

She recalled an instance early in the war, when she was working the night shift at the Lublin bus station, passing out leaflets with tips on how to protect yourself from trafficking. A woman showed up and tried to convince displaced Ukrainian women at the station to follow her.

“I remember that she was telling [them] that she has 29 houses, with everything prepared,” she says. “When I called the police, she ran away.”

Refugees from Ukraine wait for a bus in Medyka, southeastern Poland, on April 8 after having crossed the Ukraine-Poland border.

Refugees from Ukraine wait for a bus in Medyka, southeastern Poland, on April 8 after having crossed the Ukraine-Poland border.

Jarmulska says she doubled down on offering safe passage after hearing one horrifying story from a psychologist working with displaced Ukrainian women.

“The story is literally heartbreaking,” she says, fighting tears. “There was a mother with two girls, 10 and 12 years old. And they were raped [in] Ukraine, all of them. Russian soldiers. They got into a car in Poland and the driver tried to do the same thing.”

Garnier of La Strada and Wierzbicka of Homo Faber say their organizations haven’t received widespread reports of sexual assault but warn that many assaults are likely going unreported.

Some of the women restart their careers

On a recent evening, NPR meets Jarmulska at the artsy cottage she shares with her husband and their 8-year-old daughter. A Ukrainian woman and her three children also live there.

Nadia, a 37-year-old clothes designer, was one of Jarmulska’s passengers from the border. She won’t give her last name because she’s worried about her family back home but says she’s from Chernihiv, a city in northern Ukraine severely damaged by occupying Russian troops.

“My son and I almost went there to get bread ourselves,” she says, shaking her head. “My children and I left right after that.”

Weeks after arriving in Poland, Nadia has restarted her clothes-design business with a Polish partner scouted by Jarmulska. Her kids are in school, and her 16-year-old son has a part-time job doing landscaping and gardening around town.

“Even if there had been 10,000 men offering rides to me at the border that night, I would still have chosen Ella,” she says. “I could see that she was much more than a woman behind a wheel.”

Jarmulska is now expanding her driving missions. She has delivered a carload of supplies — “22 helmets, seven or eight vests and 5,000 tampons,” she says — to western Ukraine, for female soldiers. And Women Take the Wheel is also trying to buy a bus.

“As long as Ukrainian women need us,” she says, “we’ll be driving.”