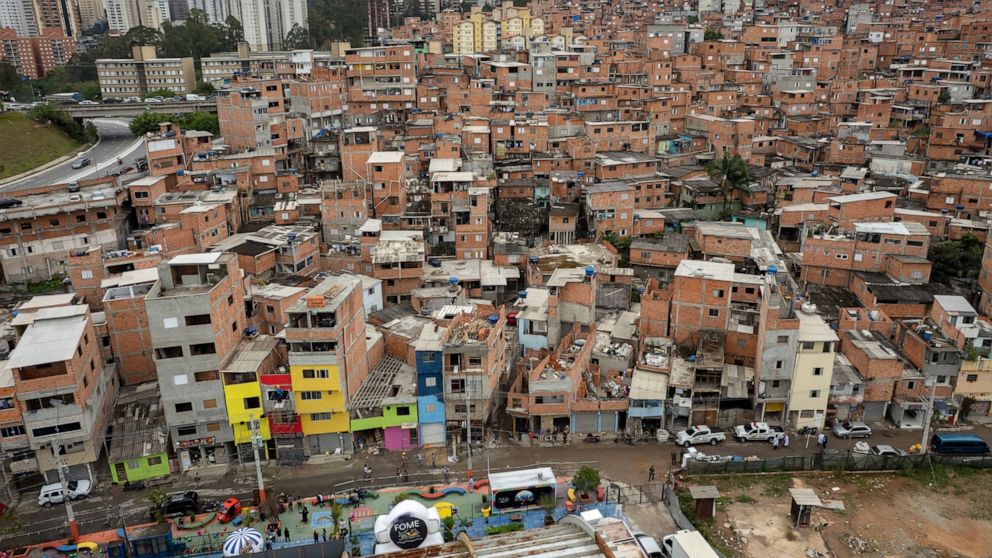 SAO PAULO — Dozens of children lined up at a community center in Sao Paulo for a slice of creamy, blue cake. None was celebrating a birthday; their poor neighborhood, the favela of Paraisopolis, was commemorating 100 years of existence.

“People started coming (to the city) for construction jobs and settled in,” community leader Gilson Rodrigues said. “There was no planning, not even streets. People started growing crops. It was all disorganized. Authorities didn’t do much, so we learned to organize ourselves.”

The favela’s centennial, which was marked on Thursday, underscores the permanence of its roots and of other communities like it, even as Brazilians in wealthier parts of town often view them as temporary and precarious. Favelas struggle to shed that stigma as they defy simple definition, not least because they evolved over decades.

Once farmland isolated from the city, today Paraisopolis is nestled in the midst of urban sprawl. Its population began expanding after a 1942 law froze rent prices, effectively halting private construction. Absent action from authorities to provide housing, people sought affordable alternatives, according to Nabil Bonduki, a professor at the University of Sao Paulo’s School of Architecture and Urban Planning.

The community grew with people moving in to construct nearby Morumbi Stadium. Today it is the city’s biggest soccer arena, home to the popular Sao Paulo Football Club — though the team’s fans are largely unaware who built it. And Paraisopolis is Sao Paulo’s second-biggest favela, home to 43,000 people, according to the most-recent census, in 2010. Recent, unofficial counts put its population around 100,000.

Most streets are now paved and internet connections work well, but newer areas of the favela lack infrastructure like sewage systems. Some don’t have postal codes.

In Rio de Janeiro, favela residents are said to be “from the hill,” the iconic vision of which is a slope covered by brick buildings; painters sell such landscapes to tourists at the Sunday arts fair in upmarket Ipanema. Many Rio favelas were indeed built on the hillside, but others are found on flatland, like the now-famous City of God favela that began as a public housing project.

Across Brazil, 11.4 million people live in low-income neighborhoods the national statistics institute classifies as “subnormal agglomerates,” according to the census, with about 40% of those in Sao Paulo and Rio de Janeiro states. That includes not just favelas, but also invasions, grottoes, lowlands, stilted houses and the like, according to the institute. They share histories of irregular occupation and deficient public services.

While favelas began as informal, squatter settlements in the back half of the 19th century, today some have deeds, water distribution and sewage networks. Their residents generate $7 billion in annual economic activity and many are technically middle class, according to Catalytic Communities, a Rio-based advocacy group.

Differences from one favela to the next also confound catchall labels. UN-Habitat defines “slums” as areas lacking improved water, sewage, living space, housing durability, or property rights. Favelas can feature one or more of those descriptions, yet advocates bristle at the word “slum” as pejorative, arguing it conveys poverty, squalor, drugs and violence rather than assets like resourcefulness and resilience.

While activists and academics use “favela,” some residents prefer “community.”

“I understand the movement that came from some favelas’ leaders and residents themselves to use ‘community’ to free themselves from the stigma,” said Adauto Cardoso, a professor at the Federal University of Rio de Janeiro’s urban planning institute. “The stigma is rather complicated in a society that is very prejudiced.”

Over the last 15 years, the term has garnered positive connotations, said Rafael Gonçalves, a favela historian and professor at the Pontifical Catholic University of Rio de Janeiro.

“Many favelas have museums today,” he said. “Residents say: ‘We want to tell our story; we want to say that this is not some spontaneous housing that was born out of nowhere.’”

Authorities who long tried to contain, obscure or demolish favelas now accept the neighborhoods are fixtures, Gonçalves added. Still, many suffer neglect, despite enduring for decades. That includes Paraisopolis.

Dressed in a suit reserved for special occasions, Paraisopolis community leader Rodrigues had tears welling as he cut the 100th anniversary cake.

He said he’s always thought of Paraisopolis as his neighborhood, despite the open sewage in some areas and other difficulties. “But for 100 years, we’ve taken these challenges and transformed them into opportunities. We’ll do it for another 100 years, if necessary.”