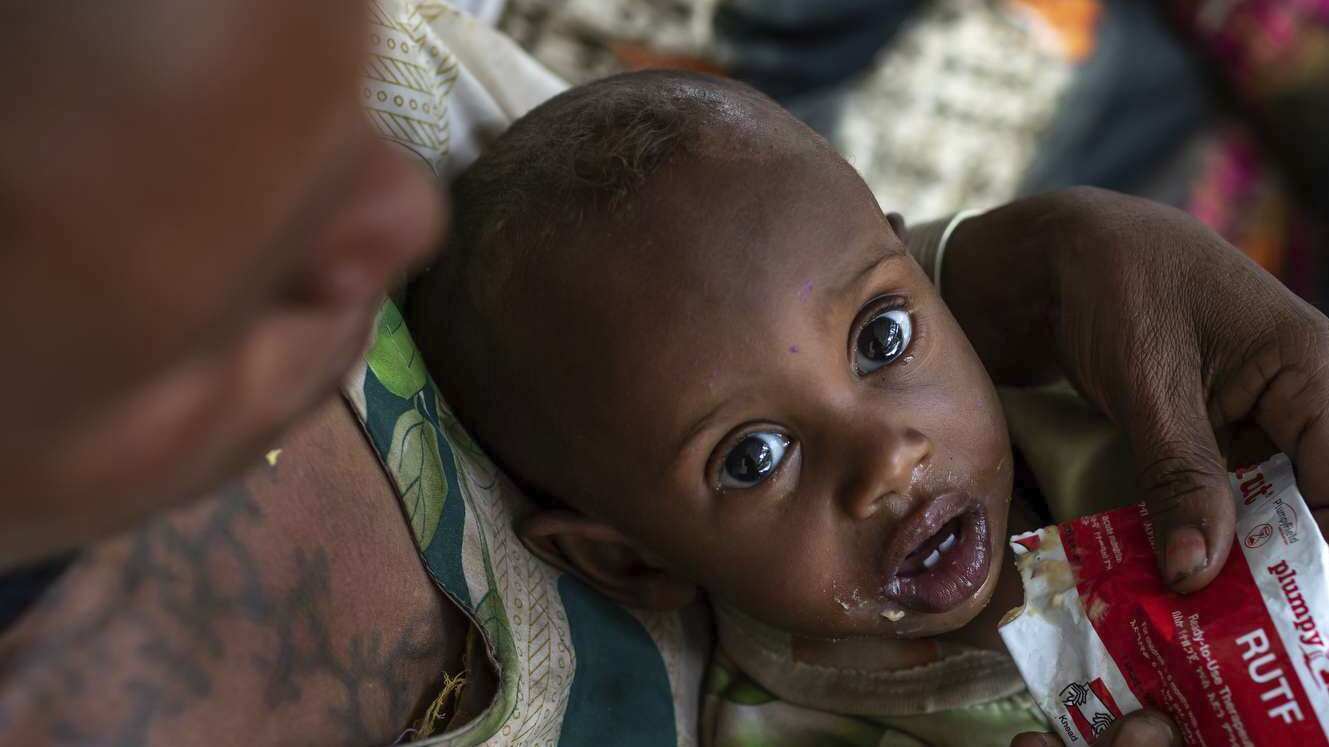 Letmedhin Eyasu holds her one year-old son Zewila Gebru, who is suffering from malnutrition at a health center in Agbe, Ethiopia Monday, June 7, 2021.

Letmedhin Eyasu holds her one year-old son Zewila Gebru, who is suffering from malnutrition at a health center in Agbe, Ethiopia Monday, June 7, 2021.

NAIROBI, Kenya (AP) — In parts of Ethiopia’s Tigray region, people now eat only green leaves for days. At a health center last week, a mother and her newborn weighing just 1.7 pounds died from hunger. In every district of the more than 20 where one aid group works, residents have starved to death.

For months, the United Nations has warned of famine in this embattled corner of northern Ethiopia, calling it the world’s worst hunger crisis in a decade. Now internal documents and witness accounts reveal the first starvation deaths since Ethiopia’s government in June imposed what the U.N. calls “a de facto humanitarian aid blockade.”

Forced starvation is the latest chapter in a conflict where ethnic Tigrayans have been massacred, gang-raped and expelled. Months after crops were burned and communities stripped bare, a new kind of death has set in.

“You are killing people,” Hayelom Kebede, the former director of Tigray’s flagship Ayder Referral Hospital, recalled telling Ethiopia’s health ministry in a phone call this month. “They said, ‘Yeah, OK, we’ll forward it to the prime minister.’ What can I do? I just cry.”

He shared with The Associated Press photos of some of the 50 children receiving “very intensive care” because of malnutrition, the first such images to emerge from Tigray in months. In one, a small child with startled-looking eyes stares straight into the camera, a feeding tube in his nose, a protective amulet lying in the pronounced hollow of his throat.

The blockade and the starvation that comes with it mark a new phase in the 10-month war between Tigray forces and the Ethiopian government, along with its allies. Now the United States has issued an ultimatum: Take steps to stop the fighting and let aid flow freely, or a new wave of sanctions could come within weeks.

The war began as a political dispute between the prime minister, 2019 Nobel Peace Prize winner Abiy Ahmed, and the Tigrayans who had long dominated Ethiopia’s repressive national government. Since November, witnesses have said, Ethiopian forces and those from neighboring Eritrea looted food sources and destroyed health centers.

In June, the Tigray fighters retook the region, and Ethiopia’s government declared a ceasefire, citing humanitarian grounds. Instead, the government has sealed off the region tighter than ever, fearing that aid will reach the Tigray forces.

More than 350,000 metric tons of food aid are positioned in Ethiopia, but very little of it can get into Tigray. The government is so wary that humanitarian workers boarding rare flights to the region have been given an unusual list of items they cannot bring: Dental flossers. Can openers. Multivitamins. Medicines, even personal ones.

The list, obtained by the AP, also banned means of documenting the crisis, including hard drives and flash drives. Photos and video from Tigray have disappeared from social media since June as aid workers and others, facing intense searches by authorities, fear being caught with them on their devices. Tigray has returned to darkness, with no telecommunications, no internet, no banking services and very little aid.

Ethiopia’s prime minister and other senior officials have denied there is hunger in Tigray. The government has blamed the Tigray forces and insecurity for troubles with aid delivery. It also has accused humanitarian groups of supporting, even arming, the Tigray fighters.

The prime minister’s spokeswoman, Billene Seyoum, did not say when the government would allow basic services to the region. The government “has opened access to aid routes by cutting the number of checkpoints from seven to two and creating air bridges for humanitarian flights,” she said in a statement. But medical supplies on the first European Union air bridge flight were removed during government inspection, and such flights cannot carry the large-scale food aid needed.

In the most extensive account yet of the blockade’s toll, a humanitarian worker told the AP that deaths from starvation are being reported in “every single” district of the more than 20 in Tigray where one aid group operates. The group had run out of food aid and fuel. The worker, like others, spoke on condition of anonymity for fear of retaliation.

“Currently, there are devastating reports coming from every corner,” the aid group wrote to a donor in August, according to documents shared with the AP. “If no urgent solution is found, we will lose many people due to hunger.”

In April, even before the current blockade was imposed, the same group wrote to the donor that “reports of malnourishment are rampant,” and that 22 people in one sub-district had starved to death.

“People’s skin color was beginning to change due to hunger; they looked emaciated with protruding skeletal bones,” the aid group wrote.

In August, another staffer visited a community in central Tigray and wrote that the number of people at risk of starvation was “exponentially increasing” in both rural and urban areas. In some cases, “people are eating only green leaves for days.”

The staffer described speaking with one mother who said her family had been living on borrowed food since June. For the past month, they had eaten only bread with salt. She worried that without food aid in the coming days they would die.

“Finally, we stopped asking her because we could not tolerate to hear additional grim news,” the staffer wrote. “The administrator of the (sub-district) has also told us that there are many families who are living in similar conditions.”

At least 150 people starved to death in August, including in camps for displaced people, the Tigray External Affairs Office has alleged. The International Organization for Migration, the U.N. agency which supports the camps, said: “We unfortunately are not able to speak on this topic.”

Some toilets in the crowded camps are overflowing because there’s no cash to pay for their cleaning, leaving thousands of people vulnerable to outbreaks of disease, a visiting aid worker said. People who ate three meals a day now eat only one. Camp residents rely on the charity of host communities who often struggle to feed themselves.

“People have been able to get by, but barely,” the aid worker said. “It’s worse than subsistence, let’s put it that way.”

Food security experts months ago estimated that 400,000 people in Tigray face famine conditions, more than the rest of the world combined. But the blockade means experts cannot collect the needed data to make a formal declaration of famine.

Such a declaration would be deeply embarrassing for Ethiopia, which in the 1980s seized the world’s attention with a famine so severe, also driven by conflict and government neglect, that some 1 million people were killed. Since then, Africa’s second most populous country had become a success story by pulling millions from extreme poverty and developing one of the world’s fastest-growing economies.

Now the war is hollowing out the economy, and stomachs. Malnutrition rates are near 30% for children under the age of 5, the U.N. World Food Program said Wednesday, and near 80% for pregnant and breastfeeding women.

As the war spreads, so might hunger. Tigray forces have entered the neighboring regions of Amhara and Afar in recent weeks, and some residents accuse them of carrying out acts of retaliation, including closing off supply routes. The Tigray forces deny it, saying they aim to pressure Ethiopia’s government to lift the blockade.

The U.N. human rights office says abuses have been committed by all sides, although to date witness accounts indicate the most widespread atrocities have been against Tigrayan civilians.

There is little help coming. The U.N. says at least 100 trucks with food and other supplies must reach Tigray every day to meet people’s needs. But as of Sept. 8, fewer than 500 had arrived since July on the only accessible road into the region. No medical supplies or fuel have been delivered to Tigray in more than a month, the U.S. says, blaming “government harassment” and decisions, not the fighting.

In mid-September the U.N. issued the first report of its kind showing in red the number of days remaining before cash or fuel ran out for key humanitarian work like treating Tigray’s most severely malnourished. Often, that number was zero.

Some trucks carrying aid have been attacked, and drivers intimidated. In August, a U.N. team trying to pick up staff from Tigray was turned around by armed police who “ordered the drivers to drive significantly over speed limits while verbally abusing, harassing and threatening them,” a U.N. report said.

Major international aid groups like Doctors Without Borders and the Norwegian Refugee Council have had their operations suspended, accused of spreading “misinformation” about the war. Almost two dozen aid workers have been killed, some while distributing food. Some aid workers are forced to ration their own food.

“It is a day-to-day reality to see human sufferings, starvation,” the Catholic bishop of Adigrat, Abune Tesfaselassie Medhin, wrote in a Sept. 3 letter, shared with the AP, appealing to partners overseas for help and warning of catastrophe ahead.

The need for food will continue well into next year, the U.N. says, because the limited crops planted amid the fighting are likely to produce only between a quarter and at most half of the usual harvest.

Grim as they are, the reports of starvation deaths reflect only areas in Tigray that can be reached. One Tigrayan humanitarian worker pointed out that most people live or shelter in remote places such as rugged mountains. Others are in inaccessible areas bordering hostile Eritrea or in western Tigray, now controlled by authorities from the Amhara region who bar the way to neighboring Sudan, a potential route for delivering aid.

As food and the means to find it run out, the humanitarian worker said, “I am sure the people that are dying out of this man-made hunger are way more than this.”