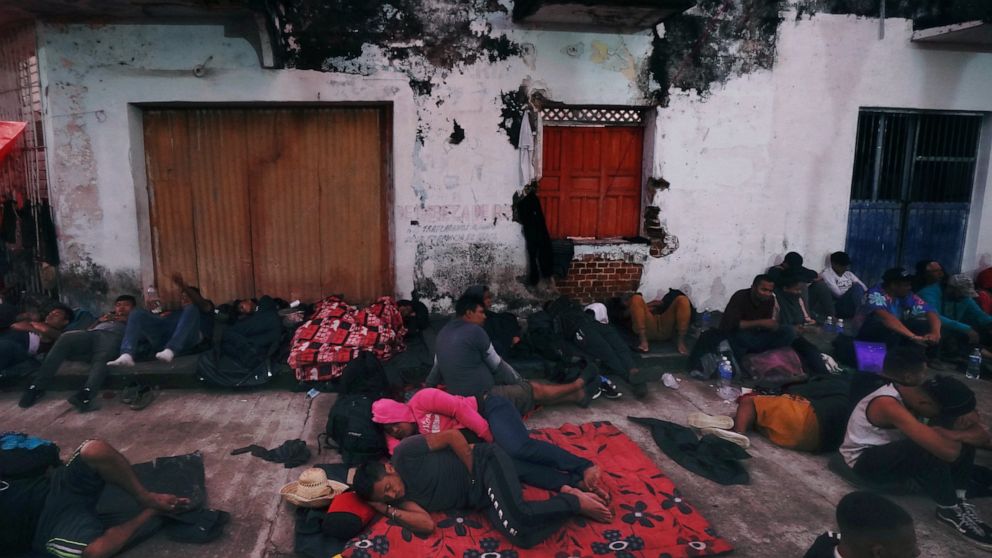 After three days of walking along a scorching highway in southern Mexico, a couple thousand migrants decided to rest here, receive medical attention for badly blistered feet, wash clothing in the river and doze in any shade they could find

HUIXTLA, Mexico — After three days of walking along a scorching highway in southern Mexico, a couple thousand migrants decided to rest here Tuesday, receive medical attention for badly blistered feet, wash clothing in the river and doze in any shade they could find.

Nitza Maldonado and Omar Rodríguez sprawled on the sidewalk beside a local church with their 6-year-old son. The Honduran family had paid a smuggler $12,000 last year to get to the United States, but they were nabbed in Texas and deported.

Due to the pandemic, they had lost their jobs there — she as an assistant at a law firm and he as a worker in a laundry. Back in Honduras, they faced unemployment and debts from their failed attempt to migrate so they decided to leave again on their own.

Sleeping on the ground and sometimes eating only one meal a day, they decided the risks of rough handling or deportation by Mexican authorities were worth joining the large group effort to walk north.

“You have to migrate because in our country there’s a lot of unemployment, there’s no education,” Maldonado said. “That’s why this is happening to us.”

It has been years since Mexican authorities allowed such a large group of migrants to walk out of the southern state of Chiapas. Recent smaller attempts were dissolved, sometimes with excessive force, by National Guard troops and immigration agents after the migrants tired.

On Tuesday, there was still no visible move to break up the group. Including hundreds of children, the group has been moving slowly, covering just 25 miles (41 kilometers) in three days.

Migrants took advantage of the pause to charge phones, dry out from Monday’s rain and cool off in the river.

Dayana Flores, 17, and her 20-year-old husband Kevin Ortiz, left Honduras four months ago when their baby was only 20 days old. Since then they’ve been in the southern Mexican city of Tapachula going regularly to Mexico’s asylum office, lining up before dawn as they attempted to get legal status, but nothing seemed to advance.

“Better to run the risk, maybe one can make it (to the U.S.), than to be there caged without work, without a place to work, without food, without anything,” Flores said.

Others spoke of similar frustration with the slow pace of Mexico’s asylum office.

Rosibel Maldonado said she waited the 45 working days that the agency said it would take to process her asylum application, but never heard anything, so she left.

Not all said they were trying to make it to the U.S. Mexico has seen the number of asylum applications it receives skyrocket in recent years. Through September, Mexico had received 90,000 applications, more than two-thirds of them in the Tapachula office.

While the government has tried to contain migrants to southern Mexico, far from the U.S. border, many seek to reach northern cities where there are far more employment opportunities than in the economically depressed south.

Carlos Fuentes was traveling with his wife and six children. They want to make it to the northern city of Monterrey.

Fuentes spent six years in the U.S. before being deported a decade ago. He said gang members tried to recruit his kids — the boys to sell drugs, the girls as girlfriends — so they had to leave.

“We’re out of money and so we decided to come with the caravan and thank God they haven’t detained us,” he said.