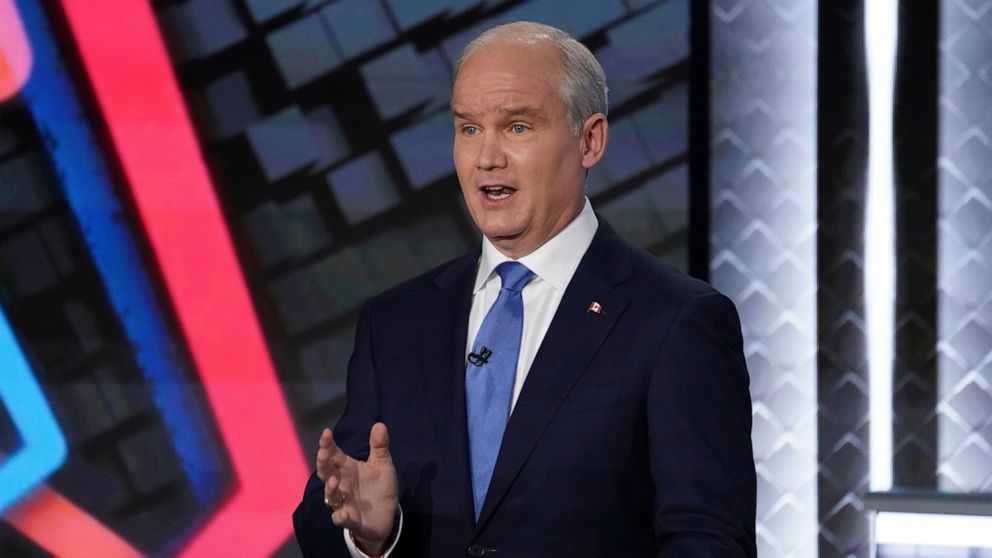 EXPLAINER: What are the issues in Canada’s close election?

Trudeau called the early election in hopes of winning a majority of seats in Parliament, but has faced criticism for calling a vote during a pandemic in order to cement his hold on power. Here’s a guide to Monday’s election:

Trudeau and his Liberal Party could lose power to the Conservative Party after six years in office. Trudeau has struggled to justify why he’s holding the election early amid the pandemic, and the opposition has been relentless in accusing him of doing it for his own personal ambition. But Trudeau is betting that Canadians will reward him for navigating the coronavirus crisis better than most countries.

Canada has seen far fewer cases and deaths than many other nations, and Trudeau’s government spent hundreds of billions of dollars to prop up the economy amid lockdowns. After a slow start Canada is now one of the most vaccinated countries in the world and leads the G-7 in vaccination rates. Trudeau recently reopened the border, but only to the vaccinated.

If elected, O’Toole says he will close the borders to prevent dangerous variants from coming in. In addition, O’Toole has pulled his Conservative Party to the center in a bid to win power and is now calling himself a progressive.

Trudeau argues having the Conservatives in power during a pandemic isn’t wise, saying Canadians need a government that follows science. O’Toole isn’t requiring his party’s candidates to be vaccinated and won’t say how many are unvaccinated. He describes vaccination as a personal health decision.

Trudeau supports making vaccines mandatory for Canadians to travel by air or rail, something the Conservatives oppose. Trudeau points out the dire situation in Alberta, run by a Conservative provincial government. Alberta Premier Jason Kenney says the province might run out of beds and staff for intensive care units within days. Kenney has apologized for the crisis and is now reluctantly introducing a vaccine passport and imposing a mandatory work-from-home order two months after lifting nearly all restrictions.

The Liberals, in turn, are running an attack ad that quotes O’Toole praising Kenney for his management of the pandemic, saying it’s been better than Trudeau’s federal government.

Trudeau gambled by trying to capitalize on his government’s handling of the pandemic but he’s been accused of calling the election early for selfish, political reasons.

Tall and trim, Trudeau channeled the star power of his father, late prime minister Pierre Trudeau, when he was first elected in 2015. He appeared on the cover of Rolling Stone and in Vogue magazine, but analysts say high expectations and overexposure have contributed to some irritation with him. Photos of Trudeau appearing in black and brownface when he was younger also surfaced in the last election in 2019, casting doubt on his judgment.

WHAT DOES O’TOOLE STAND FOR?

The son of a long-time politician, O’Toole advertised himself as a “true blue conservative” who vowed to “Take Back Canada!” when he won his party’s leadership just a year ago. Now he’s calling himself progressive and disavowing social and fiscal policies that made him his party’s leader. Polls show O’Toole could defeat Trudeau’s Liberal Party despite criticism he will say and do anything to get elected.

O’Toole now favors a carbon tax he promised to kill and the Conservatives disparaged. O’Toole reversed the party’s position on guns three weeks into the campaign, contradicting the Conservative platform he put out last month by pledging to maintain the Liberals’ list of prohibited firearms.

A politician who narrowly lost the leadership of the Conservative Party in 2017 now leads a far-right party that opposes vaccines and lockdowns. Polls suggest as much as 5% to 10% support for Maxime Bernier and his People’s Party of Canada, which could bleed support from the Conservative Party and help the Liberals retain power. A worried O’Toole said Friday that while there are other parties, there’s only one party that has a chance to defeat Trudeau — the Conservatives.

Anti-vaccine supporters of the People’s Party have tried to disrupt Trudeau’s campaign rallies. One party member was arrested for throwing gravel and rocks at Trudeau, and there have been protests outside hospitals.

A growing number of vaccinated Canadians are becoming increasingly upset with those who refuse to get vaccinated. It has been the biggest wedge issue for Trudeau.

Canadians don’t directly elect the prime minister. Instead, the post goes to the leader of the party that either wins the majority of seats in the House of Commons or can ally with another party to reach a majority. Trudeau called the early election in hopes of winning a majority but polls suggest that no party is likely to get a majority of Parliament’s 338 seats, so an alliance may be needed to pass legislation.

If Conservatives win the most seats — but not a majority — they are expected to seek an arrangement with the separatist Bloc Quebecois party in Quebec. Trudeau’s Liberals would likely rely on the leftist New Democrats. The Liberals entered this election with 155 seats, the Conservatives had 119, the Bloc Quebecois 32 and the leftist New Democrats 24. The People’s Party had none.