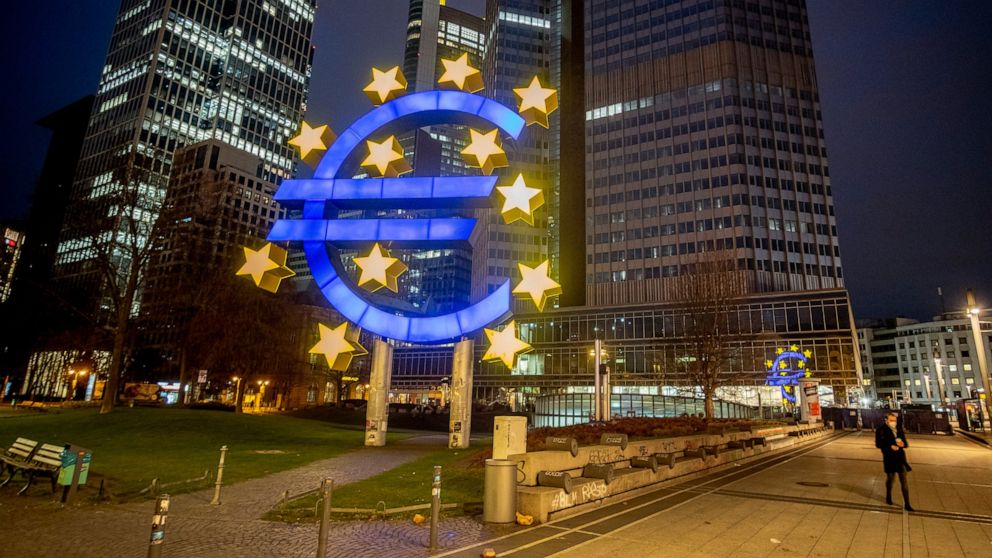 The move raises new questions about whether the rush to make credit more expensive will plunge major economies into recession at the cost of easing prices for people spending more on food, fuel and everything in between.

The ECB’s surprise hike of half a percentage point for the 19 countries using the euro currency is expected to be followed by another increase in September, possibly of another half a point. Bank President Christine Lagarde had indicated a quarter-point hike last month.

The bigger hike was justified by an “updated assessment of inflation risks,” the ECB said, and means the bank leaves an era of negative interest rates.

“Economic activity is slowing. Russia’s unjustified aggression towards Ukraine is an ongoing drag on growth,” Lagarde said at a news conference. “The impact of high inflation on purchasing power, continuous supply constraints and higher uncertainty are having a dampening effect on the economy. Taken together, these factors are significantly clouding the outlook for the second half of 2022 and beyond.”

The ECB is coming late to the party in its rate liftoff — a token of inflation that turned out to be higher and more stubborn than first expected and of the shakier state of an economy heavily exposed to the war in Ukraine and a dependence on Russian oil and natural gas. Recession predictions have increased for later this year and next year as soaring bills for electricity, fuel and gas deal a blow to businesses and people’s spending power.

“The economic outlook is worsening by the day,” said Carsten Brzeski, chief eurozone economist at ING bank. “At the same time, headline inflation is still increasing and in our view will only come down gradually towards the end of the year, if it comes down at all. In hindsight, the very gradual and cautious normalization process the ECB started at the end of last year has simply been too slow and too late.”

Recession concerns have helped push the euro to a 20-year low against the dollar, which adds to the ECB’s inflation fighting task by worsening already high energy prices. That is because oil is priced in dollars.

Raising rates is seen as the standard cure for excessive inflation, now running at 8.6% in the eurozone in June and largely driven by soaring energy prices. The bank’s benchmarks affect how much it costs banks to borrow — and so help determine what they charge to lend.

But by making credit harder to get, rate increases can slow economic growth, a major conundrum for the ECB as well as for the Federal Reserve. The Fed raised rates by an outsized three-quarters of a point in June and could do so again at its next meeting. The Bank of England started the march higher in December, and even Switzerland’s central bank surprised with its first increase in nearly 15 years last month.

The goal for all central banks is to get inflation back down to acceptable levels — for the ECB, it’s 2% annually — without tipping the economy into recession. It’s difficult to get right as central banks reverse what has been a decade of very low rates and inflation. The ECB increase is the first since 2011.

Yet the European economy has the added worry of a potential cutoff of Russian natural gas that is used to generate electricity, heat homes and fuel energy-intensive industries such as steel, glassmaking and agriculture. Even without a total cutoff, Russia has steadily dialed back gas flows, leading EU leaders to accuse the Kremlin of using gas to pressure countries over sanctions and support for Ukraine.

Those recession worries lead analysts to think that the path of ECB rate increases may have an upper limit after expected hikes in September and through the end of the year.

Those bond-market borrowing rates are now rising again, especially for more indebted eurozone countries such as Italy. Premier Mario Draghi’s resignation has brought back bad memories of Europe’s debt crisis a decade ago. There are fears that the former ECB president, who has pushed policies meant to keep debt manageable and boost growth in Europe’s third-largest economy, won’t be around to help stop the eurozone from plunging again into crisis.

Lagarde is expected to unveil at least some aspects of a new financial backstop that would combat unjustified government borrowing rates fed by market speculation. That, however, would likely not cover higher borrowing costs that result from unwise government decisions.

The hassle is unique to the ECB because it oversees 19 countries that are in different financial shape but use one currency.

The bank’s lowest rate, the deposit rate on money left overnight by banks, was raised from minus 0.5% to zero.