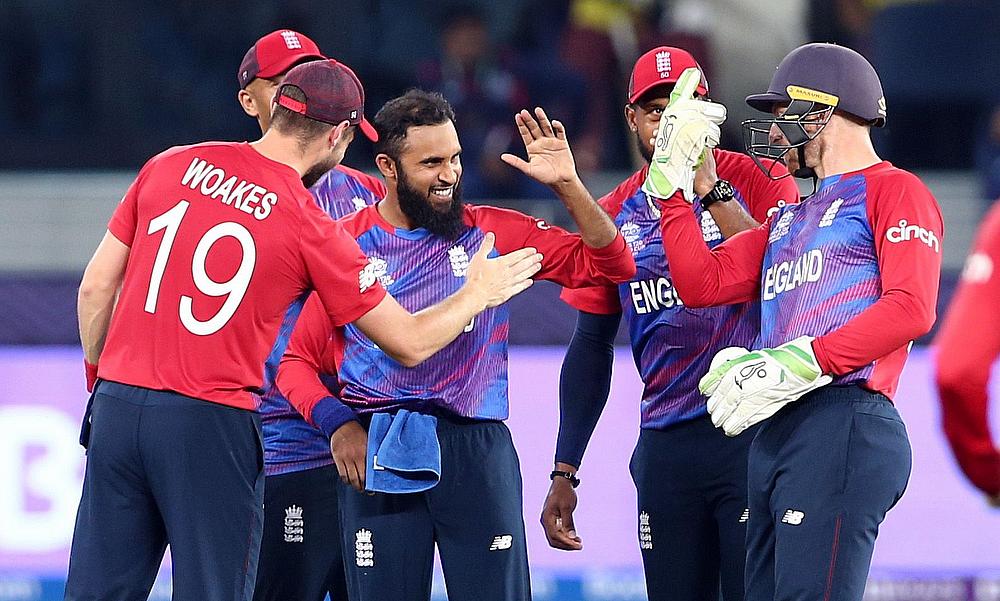 England bowled West Indies out for 55 as they made a stunning start to their Men’s T20 World Cup campaign with a six-wicket win in Dubai.

In a near-perfect bowling performance, England humiliated the defending champions by dismissing them in 14.2 overs.

Adil Rashid took a barely believable 4-2 while Moeen Ali and Tymal Mills were brilliant, both claiming 2-17.

Chris Gayle was the only West Indies batter to reach double figures in a feeble batting display – the second-lowest total against England in T20s.

Although England lost four wickets as they attempted to wrap up victory and increase their net run-rate in Group 1 of the Super 12s, it was still a statement opening win from the world’s top-ranked side and one of the tournament favourites.

Opener Jos Buttler ended 24 not out as the chase was completed with a massive 11.4 overs to spare.

“It is as good as it gets,” said England captain Eoin Morgan.

England – bidding to become the first team to hold the 50-over and 20-over World Cups – face Bangladesh in Abu Dhabi on Wednesday and Australia in Dubai next Saturday.

Earlier on Saturday, Australia held their nerve to chase 119 and beat South Africa by five wickets in Abu Dhabi.

England’s crushing win in numbers
It was the first time England have won a T20 with more than 10 overs to spare and the first time West Indies have lost with more than 10 overs to spare.
West Indies’ 55 was the third-lowest total at a T20 World Cup and their second-lowest score in T20s.
England’s win was the fourth largest at the T20 World Cup in terms of balls remaining.
Dream start for rampant England
This match was a repeat of the 2016 World T20 final, won by West Indies after Carlos Brathwaite hit four consecutive sixes in the final over.

Despite England’s batting wobble, the rematch was not as dramatic, but it was no less staggering.

West Indies are fancied to do well in this tournament, not least because of their vaunted batting line-up. But instead of racking up runs, their batters slumped back to the dressing room in a sorry procession.

England were majestic with the ball and in the field as every move made by Morgan came off.

After winning the toss he handed the new ball to off-spinner Moeen, who dismissed Lendl Simmons and Shimron Hetmyer within three accurate overs.

Mills marked his turnaround from injury nightmare to international recall by having Gayle caught in his first over at a World Cup.

Adil Rashid, usually England’s big T20 threat, was not needed until the 11th over, but when he was introduced he bowled Andre Russell with his first ball. The leg-spinner went on to blow away the tail.

West Indies fail to fire
England were excellent but West Indies’ performance with the bat raised questions about their method in T20 cricket.

England bowled 43 dot balls in the first 10 overs, their most in that period since 2012.

West Indies’ approach seemed to be to block or try to hit a six – or, on this occasion, block or bust – as batters fell repeatedly to attacking strokes.

They salvaged some pride with the ball, Akeal Hosein taking a fine diving catch to have Liam Livingstone caught and bowled, and all is not lost for them, with the top-two teams in the two six-team groups progressing to the semi-finals.

Two of the three lowest scores in T20 World Cup history have now been scored in the last two days – Sri Lanka bowled the Netherlands out for 44 on Friday – while Australia and South Africa played out a low-scoring thriller earlier on Saturday.

The early signs are that this may not be a high-scoring World Cup.

‘We need to take it on the chest as big men’ – what they said
England captain Eoin Morgan: “To start a world tournament or campaign like that, full credit has to go to our bowling unit.

“He (Moeen) summed up conditions beautifully, hit his lengths well and took chances when his match-ups were right.

“I am delighted for big T (Mills). He has had an incredibly unfortunate journey throughout his career. He is as good as I have seen him.”

West Indies captain Kieron Pollard: “Being bowled out for 55 is unacceptable. It was plain to see. I don’t think we were good enough on all counts.

“We need to take it on the chest as big men. Sometimes you just have to bin it and move on. It’s very important we forget a game like this.”

England spinner Adil Rashid: “As a bowling group we bowled exceptionally well. Everything fell into plan. Moeen started off brilliantly, along with Woakesy, and then Tymal, CJ and myself we backed up really well.

“Moeen showed us his talent again, bowling the first over tight and that set our tone off for the rest of the innings.”