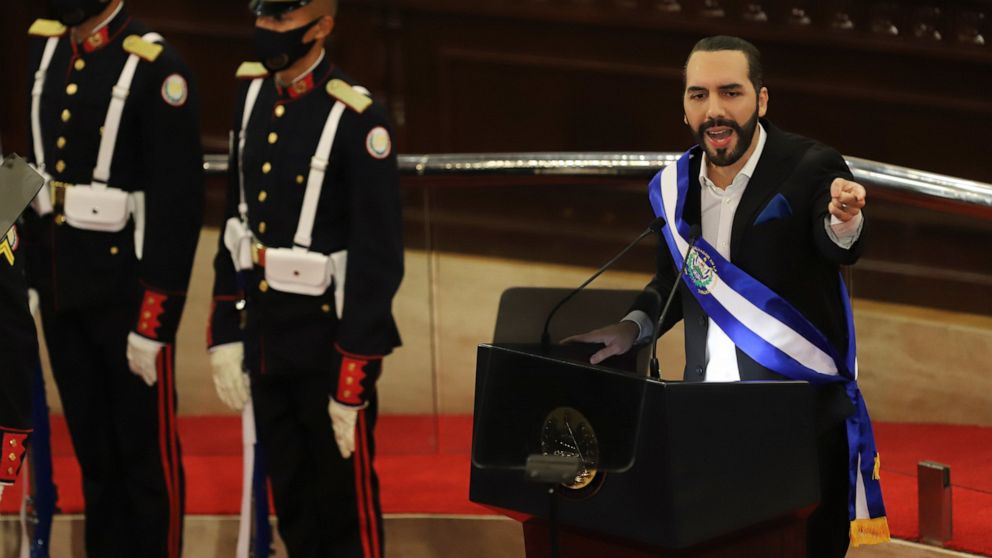 El Salvador’s president has apparently changed his Twitter profile description to “dictator,” in what may be an ironic comment on last week’s protests against him

SAN SALVADOR, El Salvador — El Salvador’s bitcoin-pushing president apparently changed his Twitter profile description to “dictator” Monday, in what might be an ironic comment on last week’s protests against him.

The office of President Nayib Bukele did not respond to requests for comment on the profile change, but there was no clear sign the president’s account had been hacked.

Bukele is a heavy Twitter user, and after his description changed to “dictator,” he continued tweeting normally Monday about bitcoin. The price and potential of the cryptocurrency appears to fascinate Bukele, and he made bitcoin legal tender in El Salvador, the first country to do so.

Not everyone was charmed by the tactic.

“Changing his Twitter profile to call himself the dictator of El Salvador is a very childish act on the part of the president,” said legislator Johnny Wright Sol, a member of the opposition Nuestro Tiempo party.

“This is part of the president’s strategy,” said lawyer Eduardo Escobar, of Citizen’s Action, a civic group devoted to government accountability. “He is trying to ridicule the feelings of the public or the opposition.”

Last week, thousands of people gathered in El Salvador’s capital for the first mass march against Bukele, who protesters say has concentrated too much power, weakened the independence of the courts and may seek re-election.

Bukele, known for his wry style, dismissed the Sept. 15 demonstration by saying protesters “took to the streets to fight a dictatorship that doesn’t exist.”

The populist president elected in 2019 has maintained high popularity with his vows to stamp out corruption that was rampant among the country’s traditional parties. But some Salvadorans say he is becoming a dictator for real.

Bukele’s New Ideas party won a congressional majority this year and immediately after taking its seats in the National Assembly in May, it replaced the five members of the Constitutional Chamber and the independent attorney general who had balked at several of Bukele’s earlier actions.

Soon after, the Constitutional Chamber tossed aside what had long been interpreted as a constitutional ban on consecutive presidential reelection, setting the stage for Bukele to potentially seek a second term in 2024. Bukele has not so far announced plans to seek reelection, but critics assume he will.

Some marchers last week protested the controversial decision by Bukele’s government to roll out a digital bitcoin wallet known as the “Chivo” one week ago. The system has been down frequently for maintenance.

Some marchers wore T-shirts that read “NO To Bitcoin.” A few demonstrators vandalized the special ATM machines set up to handle bitcoin transactions, but which have been inoperable anyway much of the time. The cubicle housing one ATM machine was destroyed.

The digital wallet appears to have been overloaded by the sheer number of Salvadorans looking to take advantage of the $30 bonus that the government put in each account to incentivize adoption.

Bukele, the main promotor of using the cryptocurrency, acknowledged the government’s three-month rollout may have been too ambitious. He said technical glitches had prevented the app from working on some kinds of phones.

Recent public opinion surveys in El Salvador have said a majority of Salvadorans oppose making the bitcoin an official currency. Still Bukele says there are now 1.6 million users of the digital payment system in the Central American nation.

2021-09-20
Previous Post: France Asks ‘Forgiveness’ for its Abandonment of Algerian Harkis
Next Post: Canadians Head to Polls for Snap Election