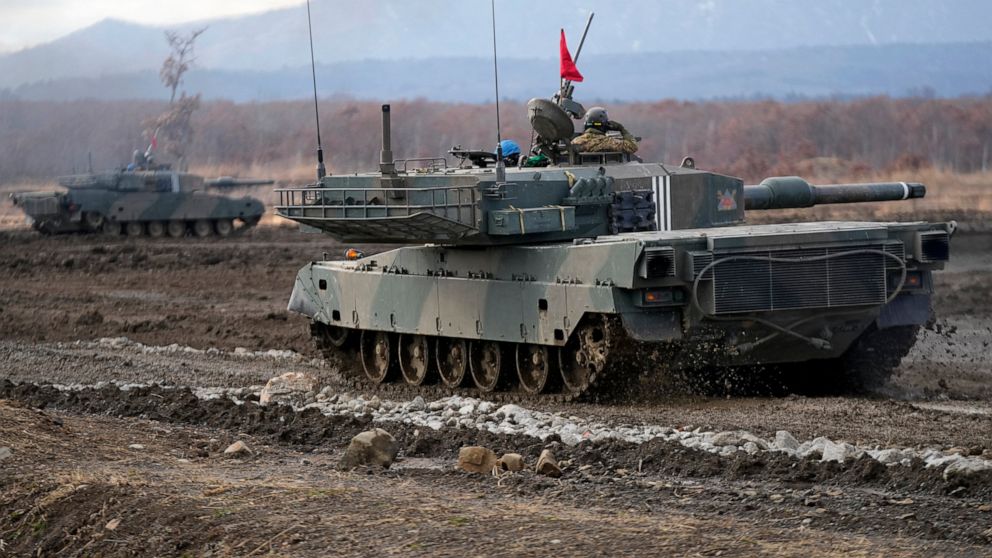 ENIWA, Japan — The dozens of Type 90, or “Kyumaru,” tanks rumbling through recent shooting drills on Japan‘s northern island of Hokkaido exemplify the challenge its arms makers face both at home and overseas as the country fortifies its defenses against strategic threats.

The Self Defense Force needs the more advanced aircraft and weaponry sold by U.S. arms manufacturers as Japan’s strategic focus shifts from Russia in the north to the south, where it faces incursions by Chinese fighter jets and naval vessels and North Korean missile launches.

Big Japanese defense manufacturers like Mitsubishi, IHI Corp. and Kawasaki Heavy Industries are struggling to sell 20th century tanks, aircraft and warships. They need to develop better technology to serve a military in the market for unmanned aircraft like Tritons made by Northrop Grumman and Boeing’s undersea Echo Voyager.

The hefty Kyumaru tanks built by Mitsubishi Heavy Industries debuted 30 years ago and are being replaced with lighter and more mobile armored vehicles that can travel on public roads and or have amphibious capabilities, including American amphibious assault vehicles.

“People may think Japan has advanced technology and it can quickly catch up with others and start selling equipment if it only gets serious, but I think that’s wrong,” said Heigo Sato, an expert on defense issues and professor at Hokkaido’s Takushoku University.

“The problem is, Japan’s defense products are not first grade. Nobody is interested in buying second- or third-grade products at higher prices,” he said.

Japan created its own Acquisition, Technology & Logistics Agency in 2015 to try to energize the sluggish domestic defense industry and promote joint technology research, development and sales with friendly nations. But profits have dwindled at home, as the government, instead of promoting sales, increased big-ticket purchases from the United States.

Japan is the world’s 12th largest arms importer, with a 2.2% global share. Most purchases are from its ally the United States, according to the latest survey by the Stockholm International Peace Research Institute, a global research organization.

A large and growing share of the 2 trillion yen ($17.7 billion) annually in equipment purchases by the Defense Ministry are made through the U.S. Foreign Military Sales (FMS) program. They more than tripled from 190.6 billion yen ($1.7 billion) in 2014 to 701.3 billion yen ($6.2 billion ) in 2019, when Japan placed orders for F-35 stealth fighters, missile interceptors and other expensive equipment to reinforce its defenses against China and North Korea.

Haggling over expensive American jets and other equipment has slowed progress on revamping the nation’s defenses, Defense Ministry officials said.

Japan has negotiated the cost of upgrading dozens of F-15 fighter jets, which had doubled from the initial U.S. estimate, down to 397 billion yen ($3.5 billion) from 552 billion yen ($4.8 billion), they said. To cut costs, Japan switched to domestic-made shorter-range air-to-surface standoff missiles from the initial plan to use U.S. long-range anti-ship cruise missiles, among other revisions, they said.

Army officials at the Hokkaido drills said they’d take whatever equipment they can get. One official joked that his camouflage uniforms were surely still Japanese made.

Japan’s total defeat in World War II, when it tried to conquer much of Asia, has left many Japanese wary of military buildups. The postwar constitution limits use of force to self-defense, and a ban on arms exports was only lifted in 2014.

Moreover, Japanese scientists tend to be reluctant to engage in research and development of technologies that can be used for military purposes.

Since the Acquisition, Technology & Logistics Agency was launched, Japan has sold just one finished product — a surveillance radar — to the Philippines. It first gave away five used TC-90 training aircraft along with pilot training and 40,000 items of parts for UH-1H multipurpose helicopters.

In 2016, a possible breakthrough sale of Soryu-class submarine technology fell through when Australia chose France to develop 12 diesel submarines. That $65 billion contract recently was scuttled when Australia switched to nuclear submarines under the AUKUS pact with Britain and the United Sates.

Negotiations to sell about a dozen US-2 ShinMaywa Industries sea planes to India have been held up by pricing disagreements. Japan’s attempts to export a radar to Thailand and frigates to Indonesia also ended unsuccessfully.

As a latecomer, Japan lacks the marketing and technology transfer expertise of the U.S., with its FMS program, and other major exporters.

“Japan needs to be more competitive, more assertive and also be more willing to engage with customers in the marketing and promotion of defense platforms,” Jon Grevatt, principal of Indo-Pacific research and analysis at the Janes, told a recent online event.

The government and the industry haven’t entirely given up. Japan is developing its own long-range surface-to-air cruise missile, and as China’s military buildup now extends to cyberspace and outer space, the Defense Ministry has begun pushing for research and development of artificial intelligence-operated autonomous vehicles, supersonic flight and other “game-changing” technologies.

Experts say Japan should accelerate work on drones, satellite constellations and technology against electronic attacks. To fund such research, the ministry requested a record 291 billion yen ($2.55 billion) budget for the year beginning in April 2022, up 38% from this year.

Japan is also pursuing joint development of its next-generation F-X fighter jet with the United States and Britain to replace its aging fleet of F-2s by around 2035. Japan and Britain recently announced plans to jointly develop a future fighter aircraft engine demonstrator and to explore work on other air combat technologies and subsystems. The project includes Japan’s Mitsubishi and IHI and Rolls-Royce and BAE Systems in the UK.

It’s a race against time as defense contractors drop out.

Yu Yamada, a Japan Business Federation senior manager for the defense industry, said it has 60-plus member companies with defense-related operations, down by about 10 in recent years.

If the trend continues, both the military and the defense industry could face supply problems, higher costs or quality concerns, Yamada said. “Supply chains cannot be reconstructed in just one to two years. The industry is facing a rather difficult situation,” he said.

In an emailed statement, the Acquisition, Technology & Logistics Agency acknowledged that keeping a domestic defense industry base was “a challenge” as companies withdraw. “We must ensure businesses are succeeded smoothly so that the technology of key suppliers won’t be lost in case of withdrawals.”