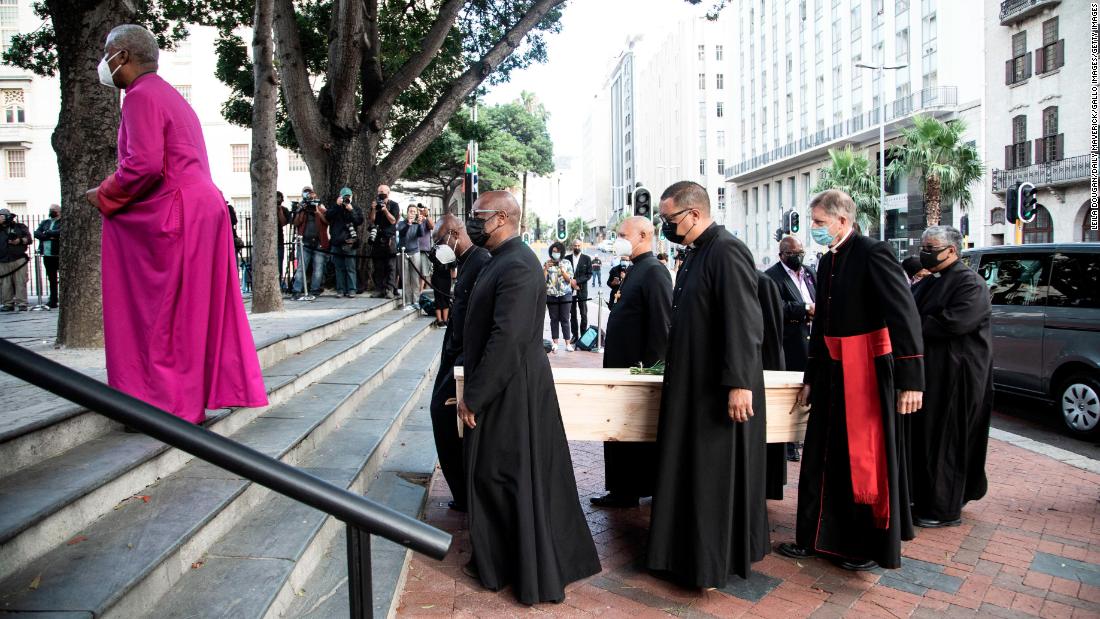 The coffin was the “cheapest available” at the request of the Nobel Peace Prize winner and human rights pioneer, according to a joint statement from his foundations.

It was transported to the cathedral by a motorcade on Thursday morning. He will remain there through Friday for visitors, with social distancing in place.

Tutu, whose work made him a revered leader during the struggle to end apartheid in his native South Africa, died on Sunday aged 90.

Memorial services have also been taking place in Johannesburg, ahead of his New Years’ Day funeral on Saturday.

One mourner at the Cathedral on Thursday, Papi Mzizi, told CNN that he had previously met the Archbishop.

“He was the moral compass of the country if you like,” Mzizi said. On a human level Tutu “never took himself seriously, he was always joking. Always bubbling, always laughing, always telling the truth,” Mzizi added.

“He never took himself higher than anyone else. He loved the people; he always supported the people,” Mzizi said.

In a statement confirming his death on Sunday, South African President Cyril Ramaphosa expressed his condolences to Tutu’s family and friends, calling him “a patriot without equal.”

”A man of extraordinary intellect, integrity and invincibility against the forces of apartheid, he was also tender and vulnerable in his compassion for those who had suffered oppression, injustice and violence under apartheid, and oppressed and downtrodden people around the world,” Ramaphosa said.

Tutu had been in ill health for years. In 2013, he underwent tests for a persistent infection, and he was admitted to hospital several times in following years.

For six decades, Tutu — known affectionately as “the Arch” — was one of the primary voices in exhorting the South African government to end apartheid, the country’s official policy of racial segregation. After apartheid ended in the early ’90s and the long-imprisoned Nelson Mandela became president of the country, Tutu was named chair of South Africa’s Truth and Reconciliation Commission.

2021-12-30
Previous Post: Premarket stocks: Welcome to the never-ending chip shortage
Next Post: Sam Fender, a Songwriter Caught Between Stardom and His Hometown