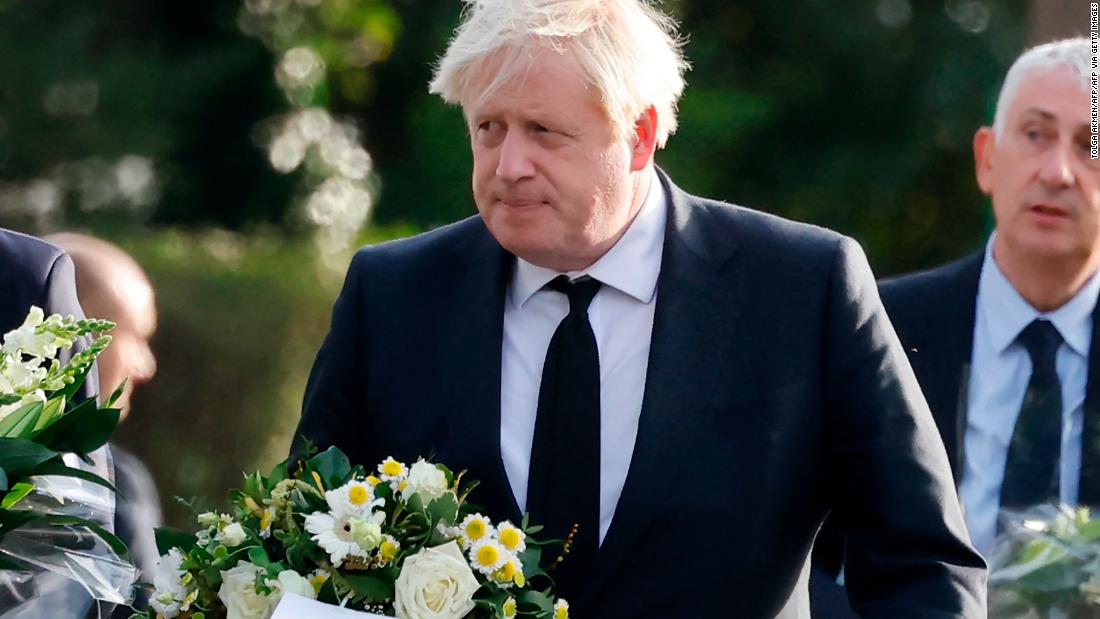 The murder has shocked the nation and prompted calls for a review of security measures for lawmakers carrying out constituency work.

Amess, 69 and a member of Johnson’s ruling Conservative Party, died after being stabbed several times at around midday Friday at Belfairs Methodist Church in Leigh-on-Sea, England.

A 25-year-old man was arrested on suspicion of murder and a knife was recovered, police said. He is believed to have acted alone.

“The early investigation has revealed a potential motivation linked to Islamist extremism,” the Metropolitan Police said in a statement overnight. Two addresses in the London area are being searched, the force said.

The man arrested is believed to be a British national with Somali heritage, official sources have told UK news agency PA Media. The UK’s Counter Terrorism Command is leading the investigation into the killing, police said Friday.

A somber-looking Johnson carried a wreath of pale roses Saturday morning to leave in front of the church where Amess was attacked.

He and Starmer were accompanied by Home Secretary Priti Patel, whose government department is responsible for policing and counter-terrorism efforts in the UK. Chief Constable of Essex Police Ben-Julian Harrington and Commons Speaker Lindsay Hoyle also carried flowers to the scene.

Speaking shortly afterward, Patel paid tribute to Amess as “a man of the people” and passionate advocate for the people he represented.

“He was killed doing a job that he loved, serving his own constituents as an elected democratic member,” she said. “And of course, acts of this (kind) are absolutely wrong and we cannot let that get in the way of our functioning democracy.”

Patel said she had been in discussions with the Commons speaker, police and security services to “make sure measures are being put in place for the security of MPs, so that they can carry on with their duties as elected democratic members.”

MPs in Britain typically meet with residents in their constituencies face to face during “surgeries,” and it is uncommon for them to have a security detail.

Measures to safeguard MPs are always being looked at and have been under review in the past 24 hours, Patel said.

She insisted that the democratic need for parliamentarians to be accessible to the people “can absolutely be balanced” with the need to ensure their safety, and that lawmakers “cannot be cowed by any individual” as they serve.

Veteran UK Labour lawmaker Harriet Harman called Saturday for a Speaker’s Conference in Parliament to discuss and review the safety of MPs.

“We cannot have the death of an MP being a price worth paying for our democracy,” Harman said on BBC Radio 4’s Today program. “I don’t think anybody wants to go to a situation where the police are vetting individual constituents who come and see us, but I’m sure there is a safer way to go about our business.”

This was the second murder of a sitting British lawmaker in five years, after Labour MP Jo Cox was killed in her constituency in 2016 by a man with extreme right-wing views, and has reignited discussions about the safety of the UK’s elected officials.
Conservative MP Tobias Ellwood, who tried to save the life of a wounded police officer during a terror attack on Westminster in 2017, tweeted Saturday that MPs’ engagement with the public was a “vital part of our work” but that there was now, understandably, “huge anxiety” among his colleagues.

“Until the Home Secretary’s review of MP security is complete I would recommend a temporary PAUSE in face to face meetings,” he said.

“They will also speak to MPs about security arrangements for any events they are planning to attend in the coming days, so the appropriate advice can be provided,” the spokesman said in a statement.

This will be done under Operation Bridger, a national police operation which provides advice to all Members of Parliament and their constituency teams on request.

“We encourage MPs to immediately report any security concerns to their local police force in order to keep themselves, their staff and members of the public attending surgeries safe,” the spokesman said.

The country’s political, religious and societal leaders, and its royal family, all condemned Friday’s attack and paid tribute to Amess.

Those who knew him described Amess — who was married with five children — as a dedicated local representative, deeply embedded within his community and uninterested in the careerism of national politics.

“As members of Southend-on-Sea’s Muslim community, we mourn the brutal and senseless killing of Sir David Amess MP. Our thoughts and prayers are with Sir David’s family, friends and colleagues at this difficult time. We share their grief at his loss, for Sir David was not only our Member of Parliament, but an upstanding friend to our Muslim community,” a joint statement published Saturday on the Essex Jamme Masjid website reads.

A vigil was held Friday evening at St. Peter’s Catholic Church in Leigh-on-Sea for local people to pay tribute to Amess.

“Everyone was just speechless. It was just awful. He was just such a kind, gentle soul, really witty, quite quirky and liked by a lot of people, and it was just shocking. Absolutely shocking,” local resident Melanie Harris told CNN.

Amess entered Parliament in 1983, initially representing the Basildon constituency, and had served continuously in the House of Commons since then, making him one of the longest-serving lawmakers in the chamber.

Lawmakers from across the political spectrum spoke Friday of their sadness, concern, and anger that another of their colleagues was killed while meeting with constituents.

In a statement Friday from Downing Street, Johnson said the MP “was one of the kindest, nicest, most gentle people in politics.”

“David was a man who believed passionately in this country and in its future,” Johnson said. “We lost today a fine public servant.”

Starmer wrote on Twitter: “Horrific and deeply shocking news. Thinking of David, his family and his staff.”

Flags outside Parliament were lowered to half staff after Amess’ death.

Amess was knighted in 2015 for his political service. He supported Britain’s departure from the European Union, and his main areas of expertise were animal welfare and pro-life issues, according to a biography on his website.

He was not considered a controversial politician, and despite the length of his tenure, he was not a widely known political figure in the UK.

In a book he wrote last year about being an MP, Amess said Cox’s murder was “totally unexpected” and the event had changed the way MPs interact with members of the public, particularly in relation to constituency surgeries.

“These increasing attacks have rather spoilt the great British tradition of the people openly meeting their elected politicians,” he wrote. “I myself have over the years experienced nuisance from the odd member of the general public at my own property. We regularly check our locks.”