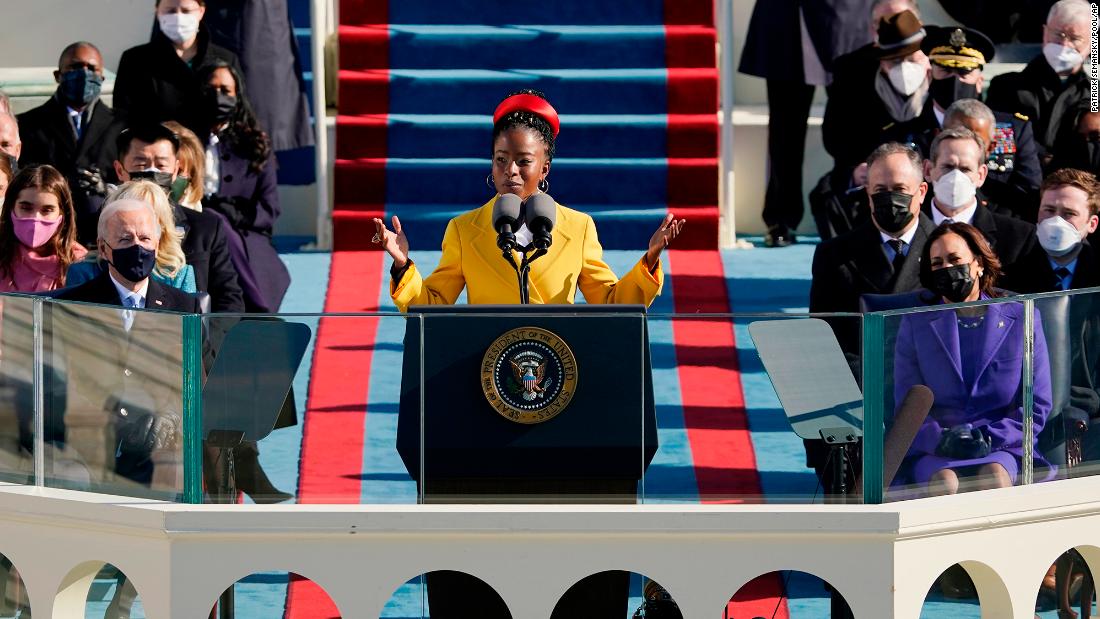 Year two of the pandemic was, in many ways, just as challenging and weird as the first.

That said, in-person events made a tentative comeback, as did socializing outside our homes — albeit with masks on our faces and hand sanitizer in our pockets. More so than in 2020, we adapted to living with the virus.

So, too, did the creative industries. Art fairs returned, as did the Met Gala, fashion shows, concerts and red carpet events. Likewise, galleries, cinemas and theaters slowly reopened their doors, reminding us of how valuable IRL culture can be.

Below are some of the most talked about moments.

The US inauguration’s breakout fashion stars

The US presidential inauguration ceremony in January looked very different than in previous years — and not just because everyone was wearing masks. The ceremonial parade was canceled, the star-studded inauguration concert was held virtually and Former President Donald Trump didn’t attend, in a historically rare snub. But the event still offered plenty to be remembered by — including the fashion.

The proceedings also spotlighted two unexpected fashion stars. One was Amanda Gorman, the youngest inaugural poet in history, who captivated the world reading “The Hill We Climb” in a vibrant canary yellow Prada coat, red satin Prada headband and red mask to match. The other was Ella Emhoff, Harris’ stepdaughter, whose outfit — a plaid houndstooth coat by Miu Miu, in particular — went instantly viral.

Amid growing trans visibility and an ongoing reckoning over racial injustice, mainstream publications showcased a more diverse cast of personalities on their covers in 2021.

Britney Spears returned to the limelight in 2021 — though not for her music. The New York Times-produced documentary “Framing Britney Spears,” released in February, renewed attention on the ongoing #FreeBritney movement by shedding new light on the conservatorship that had put the singer’s father, Jamie Spears, in control her estate.
In November, a Los Angeles judge ended the 13-year legal arrangement. Spears described it on Instagram as the “best day ever.”

The first Non-Fungible Token (NFT) artwork to be sold at a major auction was made from 5,000 digital images created over 13 years. Credit: Beeple/Christies

In March, artist Mike Winkelmann, better known as Beeple, made history by selling a virtual artwork as a non-fungible token (NFT) — which uses blockchain technology to verify ownership of digital assets — for over $69 million at Christie’s auction house.
Titled “Everydays: The First 5000 Days,” the work was a collage of 5,000 images produced by Winkelmann over the course of 13 years. It was the first purely digital NFT ever to be offered at a major auction house.
The sale positioned Beeple among the most valuable living artists and paved the way for an explosion of NFTs in the art world and beyond.

Lil Nas X caused a stir in March when he launched a pair of sneakers labeled “Satan Shoes.” Featuring a bronze pentagram, an inverted cross and a drop of real human blood, the modified Nike Air Max 97s were the result of a collaboration between the musician and New York-based art collective MSCHF.

The sportswear giant first distanced itself from the controversial design, then filed a federal trademark infringement lawsuit against MSCHF. The art collective eventually agreed to issue a recall for the sneakers and give customers a full refund.
Lil X Nas, who was not named as a defendant, responded to the backlash on social media (where else?), with a series of funny then sobering tweets and a faux apology on YouTube.

In April, Chloé Zhao became the first woman of Asian descent — and the first woman of color — to win Best Director at the Academy Awards. Recognized for her movie “Nomadland,” a drama about American retirees who follow seasonal employment while living out of their vans, she was only the second woman to receive the award (the first was Kathryn Bigelow for “Hurt Locker” in 2010).

Since launching Pyer Moss in 2013, Kerby Jean-Raymond has celebrated Blackness and Black history in each and every one of his label’s collections. In July, he made history as the first Black American designer to be invited to present at Paris Haute Couture Fashion Week.

French luxury brand Balenciaga made its much-anticipated return to haute couture in July. It was the label’s first couture show since Cristóbal Balenciaga — whom Christian Dior once described as “the master of us all”– closed his eponymous maison 53 years ago.

To honor this legacy, creative director Demna Gvasalia held the presentation on the site of the fashion house’s original salon, which had been closed for more than half a century, on 10 Avenue George V in Paris. The event was held in complete silence — a nod to how the Balenciaga founder worked on and presented his creations.

Gvasalia riffed on the master couturier’s iconic designs while demonstrating his own contemporary vision by showcasing a diverse cast of models.

Princess Diana nostalgia continued into 2021 thanks to anniversaries, an explosive interview and a new movie about the late royal’s life. Credit: STR/AFP/Getty Images

The fourth season of “The Crown” reignited our collective obsession with Lady Diana last year — but our fascination with the late royal hit new heights in 2021.

First there was Harry and Meghan’s explosive Oprah interview, which provoked new comparisons between the Duchess of Sussex and her late mother-in-law. Then, in June, Diana’s fabled wedding dress went on display at her former Kensington Palace home. The next month, a solemn new statue, unveiled in the Sunken Garden at Kensington Palace in London, marked what would have been her 60th birthday. And in November, the movie “Spencer” was released amid critical acclaim for Kristen Stewart’s performance in the title role.

A rainbow gown lit up the Olympics

Fireworks lit up Tokyo’s sky on July 23, as the delayed summer Games finally got underway. The Opening Ceremony was scaled back, with athletes marching in front of thousands of empty seats due to Covid-19 restrictions. But despite the circumstances, there was also a sense of joy at the new Olympic Stadium.
No outfit reflected this better than Tokyo-based fashion designer Tomo Koizumi’s ruched rainbow gown, made from dozens of layers of recycled organza and worn by Japanese singer Misia to perform her country’s national anthem, “Kimigayo.”

The Olympic Games brought us a much-needed diversion from the pandemic. The splashiest distraction of all? British diver Tom Daley.

The synchronized diving gold medalist, who took up knitting and crocheting in March 2020 to get through lockdown, conquered hearts when a photo of him knitting (what later turned out to be a dog sweater) in between events emerged online. Another image caught him working on a Team GB cardigan while watching his fellow competitors poolside. More adorable snapshots followed, and a hero was born.
This month, the Olympian turned the hobby into a business by releasing his own line of knitting kits, Made with Love by Tom Daley.

Statements were made at the Met Gala

Several A-listers used September’s Met Gala as a platform for political and social commentary — without having to say a word.

Cara Delevingne walked the red carpet with “Peg the Patriarchy” etched onto a white bullet-proof vest designed by Dior’s Maria Grazia Chiuri. Soccer star Megan Rapinoe was meanwhile seen carrying a clutch bearing the phrase “In Gay We Trust,” and congresswoman Carolyn B. Maloney flaunted a suffragette-inspired dress emblazoned with the words “Equal Rights for Women.”
The most talked-about gown, though, was that of representative Alexandria Ocasio-Cortez, who was attending the event for the first time. Her white off-the-shoulder number, by Brooklyn-based designer brand Brother Vellies, featured the slogan “Tax the Rich” scrawled in bold lettering on the back.
For some observers, it was a bold, subversive statement. Others saw it as an empty gesture.
“The medium is the message,” Ocasio-Cortez wrote on Instagram in response to her detractors. “The time is now for childcare, healthcare and climate action for all. Tax the Rich.”

The Arc de Triomphe got wrapped

For 16 days in the fall, Parisians passing the Arc de Triomphe found the landmark shrouded in fabric. It was an ephemeral posthumous artwork by the husband-and-wife duo Christo and Jeanne-Claude, completed just over a year after the former artist’s death aged 84.
The installation — titled “L’Arc de Triomphe, Wrapped,” in English and “L’Arc de Triomphe Empaqueté” (“packaged”) in French — involved concealing the iconic Champs-Élysées monument in 25,000 square meters (6 acres) of silvery, recyclable fabric, along with 3,000 meters (9,843 feet) of red rope to tie it together.
Christo and Jeanne-Claude began transforming public spaces into their now-famous artworks in 1961 (notable examples include the 1985’s “Pont Neuf Wrapped” and 1995’s “Wrapped Reichstag”). The Arc de Triomphe project had been almost six decades in the making: In 1962, Christo had made a photomontage of the monument wrapped, and, in 1988, a collage. The final installation took about three months to complete and only remained in place until early October.

‘Sex and The City’ was rebooted

The “Sex and the City” reboot “And Just Like That…” premiered with a shocking plot twist that left longtime fans shocked and saddened. Credit: James Devaney/GC Images/GC Images

Rumors that a “Sex and the City” spinoff was in the works began circulating in January. But it wasn’t until July, when HBO Max released the first promotional image from the series, that fans and fashion obsessives began speculating on what the return of the Carrie, Charlotte and Miranda (sans Samantha) would look like — including, of course, their clothes.

The show, titled “And Just Like That,” premiered in December, and (perhaps unsurprisingly, given the absence of original costume designer Patricia Field) it didn’t quite live up to the hype. The spinoff received less than glowing reviews, as did the characters’ wardrobes, which — while impeccable, lavish and filled with nostalgic references to past looks — don’t look quite as effortless as they did back in the day.

Still, chances are the series will shape our 2022 closets — perhaps starting with a pair of bedazzling pandemic gloves.

A final tribute to Virgil Abloh

On November 28, the fashion world was stunned by the unexpected news that groundbreaking designer Virgil Abloh had died, aged 41, after a two-year battle with cancer. Abloh was Louis Vuitton’s artistic director of menswear — the first Black designer to hold the role — and founder of luxury streetwear brand Off-White.
To pay tribute, Louis Vuitton turned the presentation of Abloh’s Spring/Summer 2022 collection into a celebration of his life. Titled “Virgil Was Here,” the 18-minute fashion show welcomed about 1,500 guests (among them Kanye West and Kim Kardashian West, Rihanna and Pharrell Williams) and was live-streamed around the world. It ended with Abloh’s voice filling the stadium: “Life is so short that you can’t waste even a day subscribing to what someone thinks you can do, versus knowing what you can do.”