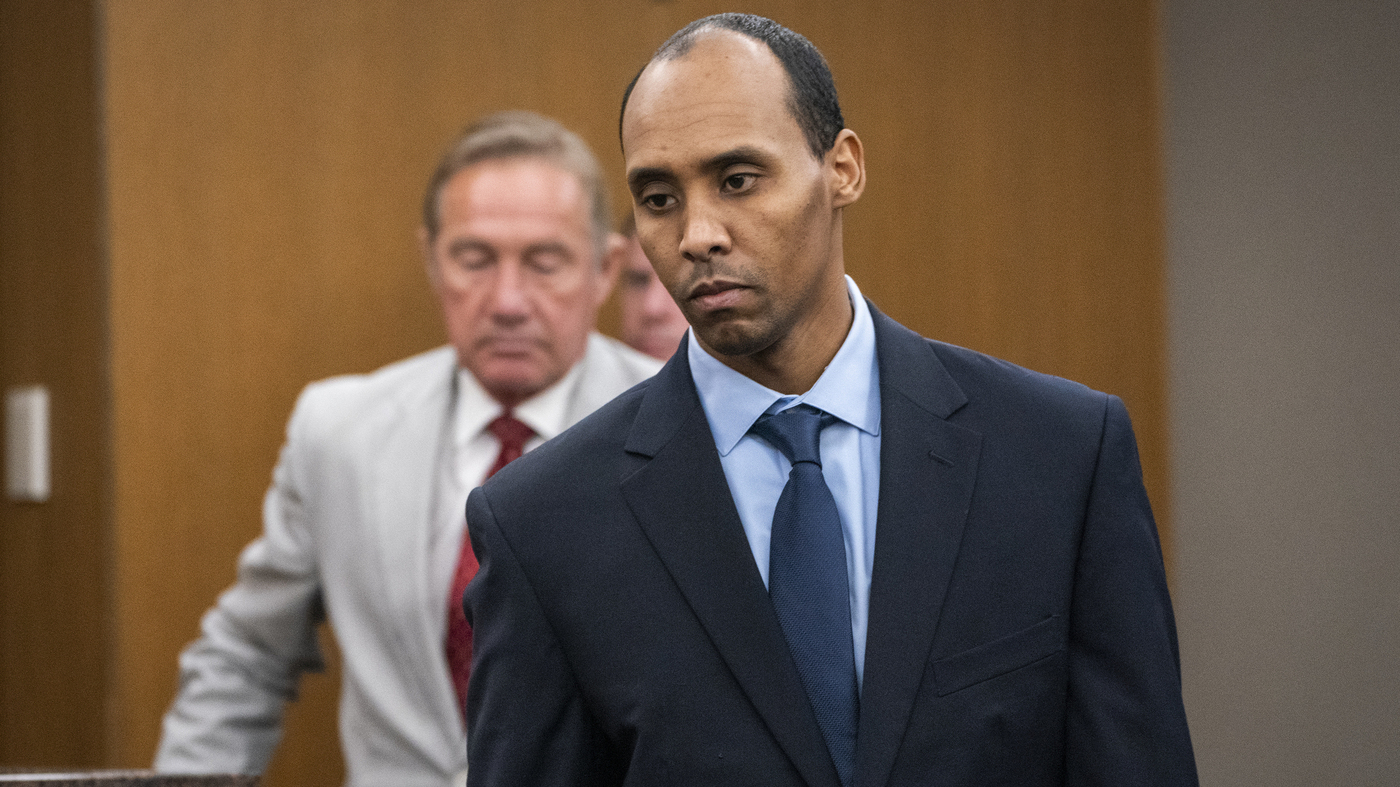 Former Minneapolis police officer Mohamed Noor walks to the podium to be sentenced in Minneapolis on June 7, 2019. The Minnesota Supreme Court on Wednesday reversed his third-degree murder conviction, saying the charge doesn’t fit the circumstances in this case.

Former Minneapolis police officer Mohamed Noor walks to the podium to be sentenced in Minneapolis on June 7, 2019. The Minnesota Supreme Court on Wednesday reversed his third-degree murder conviction, saying the charge doesn’t fit the circumstances in this case.

MINNEAPOLIS — The Minnesota Supreme Court on Wednesday reversed the third-degree murder conviction of a former Minneapolis police officer who fatally shot an Australian woman in 2017, saying the charge doesn’t fit the circumstances in the case.

Mohamed Noor was convicted of third-degree murder and second-degree manslaughter in the death of Justine Ruszczyk Damond, a dual U.S.-Australian citizen who called 911 to report a possible sexual assault behind her home. He was sentenced to 12 1/2 years on the murder count but was not sentenced for manslaughter.

The ruling means his murder conviction is overturned and the case will now go back to the district court, where he will be sentenced on the manslaughter count. He has already served more than 28 months of his murder sentence. If sentenced to the presumptive four years for manslaughter, he could be eligible for supervised release around the end of this year.

Caitlinrose Fisher, one of the attorneys who worked on Noor’s appeal, said she’s grateful that the Minnesota Supreme Court clarified what constitutes third-degree murder, and she hopes that will lead to greater equity and consistency in charging decisions.

“We’ve said from the beginning that this was a tragedy but it wasn’t a murder, and now the Supreme Court agrees and recognizes that,” she said.

Messages left Wednesday with the Hennepin County Attorney’s Office, which prosecuted the case, were not immediately returned.

The ruling in Noor’s case was also closely watched for its possible impact on three other former Minneapolis officers awaiting trial in Floyd’s death. Prosecutors had wanted to add charges of aiding and abetting third-degree murder against them, but that’s unlikely to happen now. The trio are due to go on trial in March on charges of aiding and abetting both second-degree murder and manslaughter.

In Wednesday’s ruling, the court said that for a third-degree murder charge, also known as “depraved-mind murder,” the person’s mental state must show a “generalized indifference to human life, which cannot exist when the defendant’s conduct is directed with particularity at the person who is killed.”

The justices said that the only reasonable inference that can be drawn in Noor’s case is that his conduct was directed with particularity at Damond, “and the evidence is therefore insufficient to sustain his conviction … for depraved-mind murder.”

State law has defined third-degree murder as “an act eminently dangerous to others and evincing a depraved mind, without regard for human life.” A central dispute has been whether “dangerous to others” must be read as plural, or if the fatal act can be directed at a single, specific person.

Fisher argued on appeal that the language requires that a defendant’s actions be directed at more than one person, and that the law is meant for cases such as indiscriminate killings.

But prosecutors urged the Minnesota Supreme Court to uphold the third-degree murder conviction, saying that nearly all killings by officers are directed at a specific person.

“If you maintain that a person cannot be convicted of third-degree murder … if their actions are directed at a particular person, there is not going to be an officer-involved shooting that can be prosecuted under Minnesota’s depraved-mind murder statute,” Hennepin County prosecutor Jean Burdorf said during oral arguments in June.

Noor testified in his 2019 trial that a loud bang on his squad car made him fear for his and his partner’s life, so he reached across his partner from the passenger seat and fired through the driver’s window. Fisher told the Supreme Court justices that “it would be very hard to imagine” that an officer’s “split-second reaction to a perceived threat” would count as a “depraved-mind murder” but that other charges could be justified instead, such as manslaughter.

“Mohamed Noor did not act with a depraved mind. Mohamed Noor was not indifferent to human life,” Fisher said during her arguments before the Supreme Court. “With the benefit of hindsight we now know that Mr. Noor made a tragic split-second mistake. But if there is to be any meaningful difference between murder and manslaughter, that mistake is not sufficient to sustain Mr. Noor’s conviction for third-degree murder.”

She said Wednesday that she had not yet talked to Noor, but knows the opinion will mean a lot.

“He really believed that he was saving his partner’s life that night, and instead he tragically caused the loss of an innocent life,” she said. “Of course that is incredibly challenging, but I think just having reaffirmation that a mistake like that isn’t murder will mean more than words can say.”