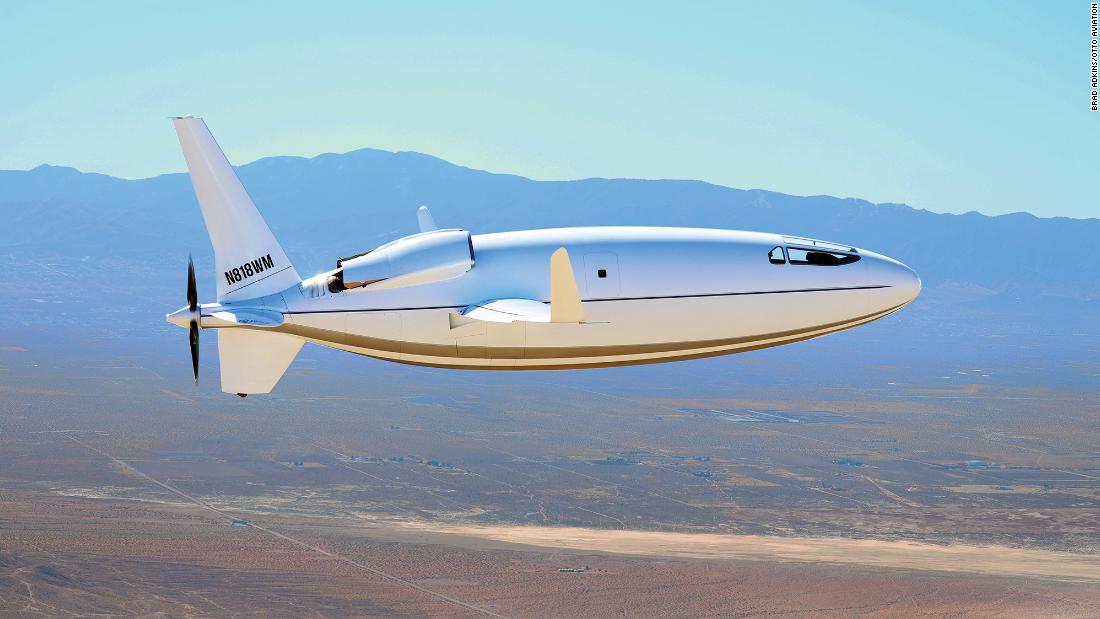 Celera 500L: The egg-shaped plane that could revolutionize business aviation

By: Daisy-May Amos
In: Uncategorized
Tagged: 500L, aviation, Business, Celera, Celera 500L: The egg-shaped plane that could revolutionize business aviation - CNN, eggshaped, plane, revolutionize, travel
With: 0 Comments
(CNN) — Is it an egg, a blimp or a bullet? Whatever you might want to call the shape of the Otto Celera 500L, it’s one that catches the eye. It looks like no other plane out there, and for a good reason: unique aerodynamics.

The shape of the Celera is designed to drastically reduce drag by allowing air to flow very smoothly over the surface of the plane. That makes the aircraft less power-hungry, which means it burns less fuel.

In numbers, that means operating costs that trounce those of similarly sized business planes. According to Otto Aviation, flying on the Celera will cost $328 an hour compared to $2,100, with a fuel economy of 18 to 25 miles per gallon — similar to that of a large SUV — compared to two to three miles per gallon.

All of that with enough space for six passengers, a speed of 460 miles-per-hour and a range of 4,500 miles, comparable to that of an airliner. Is it all too good to be true?

The Celera 500L’s design was partly inspired by torpedoes.

The Celera 500L, which is currently a prototype, is the brainchild of William Otto Sr., an aerospace veteran whose work spans from the US Minuteman missile program to the B-1 bomber. The project started as a thought experiment: Would it be possible to design a business aircraft that is dramatically cheaper to run than current options?

For inspiration, Otto looked at studies he had done on torpedoes, when he was trying to fit more of them into a submarine. To do so, he made the engines that propelled them much smaller, by giving the torpedoes a more efficient shape that required less power.

That shape was dictated by a concept known as “laminar flow.”

Laminar flow occurs when a fluid — such as air — flows in parallel layers, with no disruption; it is the opposite of turbulence, which happens when the flow is mixed or chaotic.

The egg-like shape of the Celera 500L is designed to achieve laminar flow on the surface of the plane, allowing for a smoother penetration through the air.

Otto Aviation says the design offers a 59% reduction in drag compared to similarly sized aircraft, resulting in massive savings on fuel and emissions.

But if laminar flow works so well, why aren’t all planes designed like this?

“To maintain laminar flow you have to create structures that don’t flex, bend or distort the shape,” says Otto. “You could never do this with metal, composites are really the only way.

Even small, temporary imperfections like ice or squashed bugs can impair laminar flow, which is very difficult to scale to the size of an airliner. Otto adds that cheap fuel might have also played a role in making designers shun it in favor of simpler engineering.

Because laminar flow makes the plane require less power, the Celera 500L is equipped with a single V12 diesel engine at the back, designed by German manufacturer RED. “It was the most efficient aircraft engine we could find, to match the most efficient aerodynamic body,” says Otto.

In the near future, the diesel engine could be replaced with an electric or hydrogen one, to make the plane emissions-free. “For now, we’ve reduced carbon emissions by 80% over competitor aircraft; on a per passenger basis, we’re better than the airlines meeting the 2030-2050 emissions requirements,” Otto adds.

The Celera 500L first flew in 2018 and has since completed about 50 test flights. So far it has only reached a top speed of about 180 miles-per-hour and an altitude of 17,000 feet, but a more powerful version of the engine, to be installed soon, will enable faster speeds and higher altitudes, closer to 40,000 feet.

At some point, windows will be added to the fuselage (there currently aren’t any). Otto believes the plane will eventually go on sale by 2025.

“At this point, we’re starting to go out and talk to potential partners and operators around the globe. We’ve had interest from all over the world in this aircraft, and estimate that the audience for this is about 100 times larger than the current private aviation market,” says Otto.

The airplane is expected to have an initial price tag of $5 million.

Due to the shape of the aircraft, the cabin is more spacious than that of comparable planes such as the Pilatus PC-12 or the Beechcraft King Air. “We’ve got a 6’2″ cabin height, which allows you to walk onto the aeroplane. There’s a stand-up lavatory. It’s really on the same level as a mid-size business jet,” says Otto.

The unconventional appearance, however, could be a drag for some customers.

“This may not appeal to the corporate executives flying in their Gulfstreams, but there’s a very large audience of people who are frustrated with commercial airlines, airport security, waiting in lines and how long it all takes,” says Otto.

Initially, the plane will be sold to private customers — at a price tag approaching $5 million — but there are plans for two larger models that could accommodate up to 19 and 40 passengers respectively, making them competitive with regional jets. Otto says discussions are ongoing with major airlines.

The Celera, however, has a long road ahead before that, which includes years of test flights and a full certification of the aircraft. Most importantly, it includes delivering on an impressive set of promises.

According to Richard Aboulafia, an aviation analyst at Teal Group, Otto Aviation is making very big claims in terms of aircraft performance.

“It all sounds exceptionally promising, but perhaps too promising,” Aboulafia says. “Given the combination of range, speed, capacity, and a very low powered engine given all of those metrics, I think they just need to demonstrate that it works.

“If they can actually achieve what they claim, then it should be scalable upward,” he adds. “But again, I think it’s best to take a cautious view, and wait to see whether it can be proven on their first aircraft.”