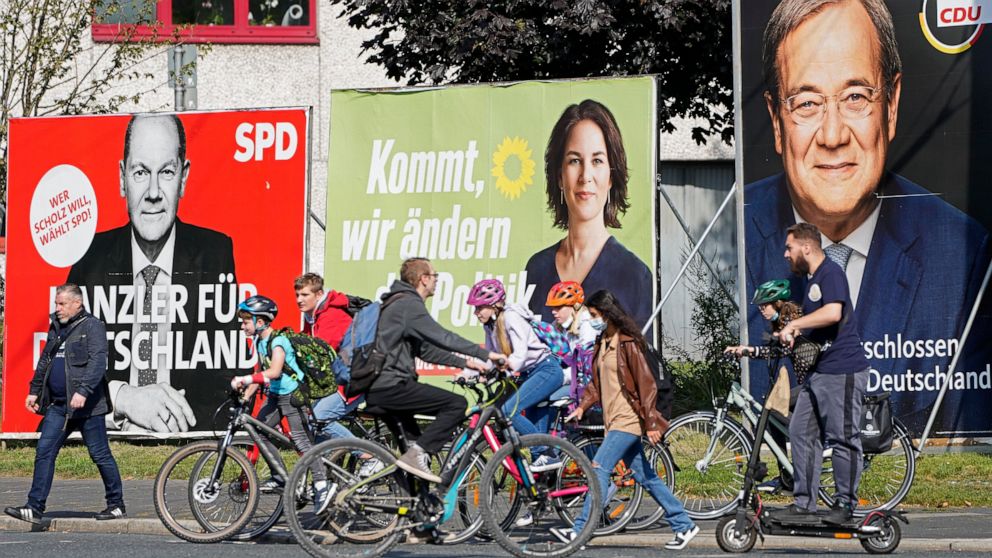 The three candidates hoping to succeed Angela Merkel as German chancellor, and the four leaders of the other parties currently in parliament, have clashed over a variety of topics during the last televised debate before Sunday’s election

BERLIN — The three candidates hoping to succeed Angela Merkel as German chancellor, and the four leaders of the other parties currently in parliament, clashed Thursday over a variety of topics in the last televised debate before Sunday’s election.

Unlike previous debates that repeatedly focused on climate change, poverty and other domestic topics, the candidates discussed foreign policy issues for the first time, too.

Olaf Scholz of the center-left Social Democrats, who is currently Germany’s finance minister, said closer cooperation within Europe is needed but that at the same time the EU needs to continue to work closely together with the United States and NATO.

“We are the big country in the middle of the European Union with the biggest population and the biggest economic strength,” Scholz said. “And therefore we need to make sure that Europe speaks with a more united voice.”

His closest rival, Armin Laschet of the center-right Union bloc, also spoke out for a stronger and more united Europe, adding that the continent should cooperate on common arms projects.

“We need more Europe, we need to speak with one voice,” Laschet said. “We need to start projects together, also arms projects to be able to act together.”

Green party candidate Annalena Baerbock said Europe needed to find a common approach on how to interact with China.

“I want to make sure that we create a united, European approach toward China in which one (EU) country doesn’t get played off against the other,” she said.

The candidates and party leaders also faced off over how to solve housing shortages in big German cities, fight hatred on social media, and tackle the radicalization of the protest movement against pandemic restrictions.

Merkel’s Union bloc and its candidate for chancellorship, Laschet, have made small gains in the polls in recent weeks. But it remains narrowly behind the center-left Social Democrats, headed by Scholz.

The Greens, who are putting forward their own candidate for chancellor for the first time, are trailing in third place, but could play kingmakers when it comes to forming a government.

The close race and number of parties with significant support means the next government will be determined by post-election coalition negotiations between at least two and more likely three parties.

Merkel, chancellor since 2005, is not seeking a fifth four-year term.

Slightly over 60 million Germans will elect a new parliament. The party with the most seats will seek to form a coalition government and gets its candidate elected as chancellor by lawmakers.