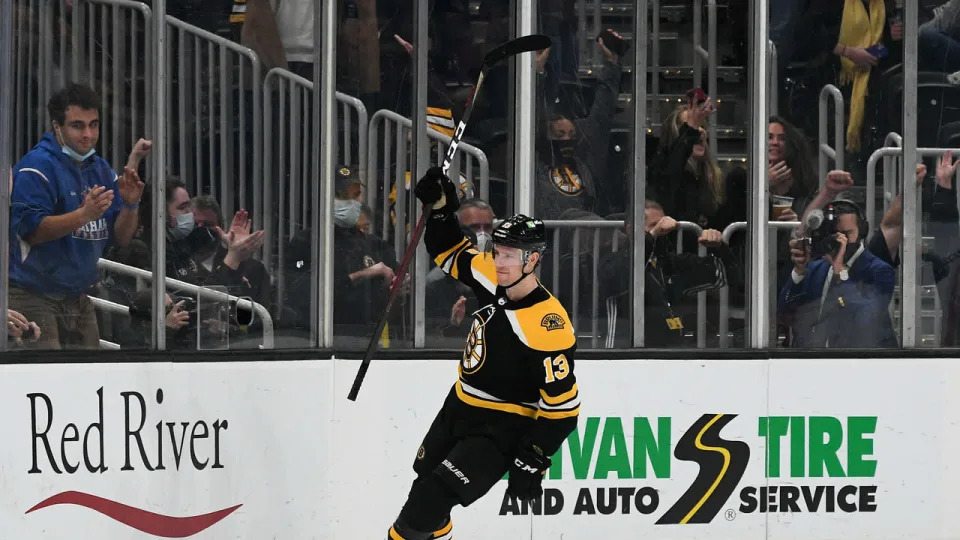 Nine goal scorers and four points later, the Bruins (16-10-2, 34 points) have moved into possession of the second and final wild-card spot in the Eastern Conference playoff picture after wins over Atlantic Division foes in the Buffalo Sabres (10-17-6, 26 points) and Detroit Red Wings (15-15-3, 33 points).
Recapping the Bruins in 2021 and looking ahead to pivotal 2022

For as lackluster as the B’s looked prior the COVID-19 shutdown, their performances in a 4-3 overtime win over Buffalo at TD Garden followed up with a 5-1 win over Detroit just 24 hours later at Little Caesars Arena shouldn’t go overlooked, regardless of the quality of opponents — although it was the Wings whom the Bruins leapfrogged in the standings Sunday.

Here are some of the key takeaways from the weekend, which began a stretch of games in January in which the Bruins are scheduled to have as many as two days off between games just once.
Top line shuffle pays immediate dividends

For years, fans have clamored for coach Bruce Cassidy to shift things around when it comes to Boston’s top line as the rest of the offense goes cold.

For at least two games, Cassidy experimented with David Pastrnak playing away from Patrice Bergeron and Brad Marchand, and the results would seem to speak for themselves.

“When you split it up, the only thing I’d say is, there might be a little more oxygen in the room for the secondary guys at times,” Cassidy said. “They get a lot of O-zone draws because they’re good at them. They run plays from them, they score. A little bit of the onus falls on the rest of the group to learn from what they do well.”

In a weekend which highlighted what the team’s depth players are capable of when everything is clicking, Pastrnak was quiet while playing on the second line with Taylor Hall and Erik Haula. But with extra attention on Pastrnak, Hall was able to break loose and score against the Sabres in the third period on Saturday, tying the game at 3-3 at 4:49 of the third period, and Haula slipped free from the Red Wings’ offensive zone on Sunday to score what amounted as the game-winner for the B’s:

The goal was just the second of the season for Haula, who’s been a tremendous disappointment to date as one of Boston’s free agent signings last summer. But if he gets to keep playing on a line with Pastrnak, he’ll have additional chances to contribute in all facets of the game on offense.

“I felt like my game was headed in the right direction before [the shutdown],” Haula said. “I thought my game elevated when I got put on the wing a little bit. It’s going toward what I expect from myself. Hopefully I can keep building and produce a little bit more here.”

Bergeron scored a goal and Marchand had two assists sans Pastrnak; playing up on the top line, Craig Smith had a goal against Buffalo and an assist against Detroit.

“I’d say it’s a shared responsibility for the coach to divvy up the minutes and for the players to play well with whoever you’re out there with,” Cassidy said.
McAvoy picks right up where he left off

One of the only players who’d been consistently bringing it on a night in, night out basis prior to the shutdown had been defenseman Charlie McAvoy, who was blooming into a legitimate No. 1 defenseman before our eyes.

Through two games back on the ice, McAvoy has done nothing to suggest he doesn’t belong in the conversation as one of the best blue liners in the game, scoring a goal against the Red Wings and dishing out four assists over the course of the weekend.

For the season, McAvoy is up to 20 points (five goals, 15 assists) over 28 games. After finishing fifth in Norris Trophy voting as the league’s best defenseman a season ago, McAvoy should remain a fixture in the discussion not just this year but for seasons to come.
What’s next in net?

Linus Ullmark was good enough for the Bruins on Saturday, making 21 saves on 24 shots and keeping the Sabres off the scoreboard in both the third period and overtime. Jeremy Swayman, meanwhile, made 23 saves on an equal number of shots against the Red Wings.

The split in the cage came as no surprise, but it sure sounds like there’s a third goalie inching closer to entering the conversation. What will happen when Tuukka Rask is ready to return?

Amid ongoing uncertainty with COVID-19, it’s far from a bad thing to have three NHL-caliber goaltenders at the ready when some teams barely have one. That said, with the amount of smoke there’s been surrounding Rask, it’s only a matter of time before the fire breaks out and there’s a decision to be made on who the odd man out is.

Does it make sense to carry three goalies on the varsity? Will Swayman automatically revert to AHL Providence? Is there a trade to be made involving Ullmark?

Given the amount of games at hand the Bruins had even before the COVID-19 shutdown, would a three-man rotation in net actually be a plausible solution? Beginning Tuesday, Boston has 20 games scheduled over the next 28 days. The Olympics break was scheduled to begin on February 2, but with NHL players no longer headed for Beijing, the Bruins will get little time off over what was supposed to be a 22-day recess.
Signs of life from bottom six

In addition to Haula, fellow free agent signing Nick Foligno has been a big zero for the black and gold this season, as well as 2016 first-round draft pick Trent Frederic.

Entering the weekend, both Foligno and Frederic had played 18 games for the Bruins this season…with zero goals to show for either of them.

That finally changed, with Foligno finding the net in the third period vs. Buffalo and Frederic getting in on the action in the third against Detroit.

Will the goals start coming in droves for either player? Foligno did score 30 goals in a season once, albeit way back in 2014-15 with the Columbus Blue Jackets. Or will it merely be a flash in the pan, which is what wound up happening with Haula; after going scoreless in his first 12 contests with the B’s, he’d fail to score in each of his next 14 games.