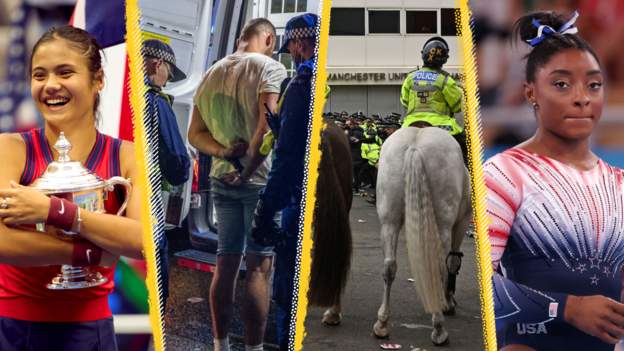 It is hard to recall a more momentous year for sports news than 2021, one full of ups and downs, with compelling drama on the field accompanied by remarkable intrigue and controversy off it.

If 2020 was the year that sport stopped because of Covid, this year it defiantly bounced back, the spectators who gradually returned to venues rewarded with some unforgettable performances.

Emma Raducanu’s spellbinding US Open triumph was arguably the greatest sporting fairy tale in British history, potentially hugely significant for the future of both tennis and women’s sport.

At a time when the pandemic has exacerbated a physical inactivity crisis, the hope was that the teenager’s win would inspire many youngsters to take up tennis, after fears the Lawn Tennis Association – which governs the sport in Britain – had failed to harness Andy Murray’s era of success.

The first ever appearance by England’s men in football’s European Championship final and British athletes’ feats at the Tokyo Olympics were among others performances that lifted spirits when it was needed most.

Formula 1, meanwhile, witnessed one of motorsport’s most thrilling and contentious finales, the driver’s championship remarkably only decided on the very last lap of the very last race after a decision by the race director costing Lewis Hamilton what would have been a record eighth title. Max Verstappen’s victory has divided the sport amid fears entertainment was put ahead of fairness.

Crisis for both football and cricket

But away from the action, 2021 also featured two of the biggest, most dramatic and fastest-moving stories I have covered in two decades of sports reporting – the rise and fall of football’s breakaway European Super League (ESL) and English cricket’s racism crisis.

Perhaps only Fifa’s great corruption scandal in 2015 can compare in terms of sheer intensity, levels of interest and impact. But the collapse of the ESL plot and the turmoil at Yorkshire County Cricket Club, following very different controversies, had much greater domestic relevance than the implosion at Fifa, shaking each of England’s two national sports to the core. Both stories raised serious questions about governance, with a significance that extended to politics and wider society.

The unprecedented protests and fan power that helped defeat the ESL, the tension and divisions it caused between clubs and leagues, and the renewed scrutiny of ownership, encapsulated a year in which football finance was a central theme, one that also witnessed:

The last of these, and the fate of those proposals in the face of opposition by some Premier League clubs, will be a major feature of 2022, and given that three of the overseas ESL clubs (Barcelona, Real Madrid and Juventus) are still fighting to keep their hopes of a super league alive, that story is far from over.

The ECB meanwhile, now under renewed pressure after yet another Ashes humiliation, will be judged on its ability to restore faith and improve diversity in a sport that, despite the launch of The Hundred competition this summer, has been badly damaged by the crisis that brought Yorkshire to its knees.

Ex-player Azeem Rafiq’s allegations of racist abuse at the club sparked a national debate over inclusivity, language and prejudice – in the sport and beyond – and has since led to a flood of further allegations of discrimination across the county game.

A compelling but controversial Euros

Football faced its own battles with racism, the online abuse suffered by some of England’s black players after the Euros final defeat by Italy perhaps the most infamous example of a sadly recurring issue during 2021.

In a year in which England players were booed for taking the knee before matches, and then abused by fans in Hungary, the episode after the penalty shootout defeat heaped more pressure on the social media tech giants.

The violence and disorder at Wembley before the match also overshadowed one of the most significant days in the history of English football, leading to an unprecedented Uefa punishment for the Football Association and a damning independent review by Baroness Casey into the failings behind the mayhem, amid fears it could have scuppered a possible joint British and Irish bid to stage the 2030 World Cup.

The Euros will be remembered fondly by many – fans returned despite worries over the wisdom of staging a postponed pan-continental tournament in a pandemic, and there were some classic matches.

Denmark won huge admiration for the way they handled the shock of Christian Eriksen’s collapse in their opening match, an incident that saw football unite in support of the player.

England’s resurgent men’s team reached their first appearance in a major final since 1966. But there was also plenty to regret.

A Games behind closed doors

The so-called Covid Games that followed in Tokyo were unique. Like the Euros, they were a year late, but became the first ever to be staged behind closed doors while in a state of emergency, with local organisers and the International Olympic Committee under intense scrutiny over the wisdom and motives of their decision to press on, despite Japan’s slow vaccine uptake.

In the end, the sense was that the Games were rescued, and perhaps vindicated, by the performances of the athletes. There were new world records, major surprises, and a host of new stars emerged.

Despite the added scrutiny on Britain’s high-performance system after the series of athlete welfare controversies of recent years, and the challenges of the pandemic with protocols and restrictions to navigate, there was another hugely impressive medal haul by Team GB. Sixty-five medals exceeded all expectations and must go down as one of the greatest achievements in the history of British Olympic sport.

In the traditional powerhouse of rowing, Britain had their worst Olympics since 1996, and there was no gold in track and field, but with the help of historic performances by the swimming and boxing teams, and the emergence of some new stars, Team GB finished fourth in the medal table.

ParalympicsGB meanwhile were again second in their medal table, with 124 medals – including 41 golds. Britain won medals in 18 of the 19 sports they entered, a new team record.

Tokyo made history for other reasons too. New Zealand weightlifter Laurel Hubbard became the first openly transgender athlete to compete at an Olympics in a different gender category to the one in which they were born, a defining moment in a wider divisive debate that has forced sports to confront issues of gender, inclusivity and fairness.

Superstar US gymnast Simone Biles’ series of withdrawals was arguably the story of the Games, one that raised awareness of the pressures athletes are under, an issue also highlighted in 2021 by the likes of tennis player Naomi Osaka and cricketer Ben Stokes, who also prioritised their mental health and wellbeing above competing.

British sprinter CJ Ujah – part of GB’s silver medal-winning men’s 4x100m relay team – was suspended from competition after testing positive for a banned substance in a case now referred to the Court of Arbitration for Sport.

Meanwhile, the IOC launched an investigation into allegations that Belarus attempted to force athlete Krystina Timanovskaya to return home against her will.

There were many other big stories in 2021, among them:

China will continue to cause controversy, with February’s Beijing Winter Games approaching, and not only because of the challenge that organisers now face over the Omicron coronavirus variant.

Already hit by a flurry of diplomatic boycotts because of widespread allegations of Chinese human rights atrocities, there will be significant interest in how athletes handle the event, especially given the renewed activism of recent years, with more and more competitors speaking out about a range of social issues.

The same applies to the Qatar World Cup of course, another hugely controversial mega-event, not least because of concerns over the treatment of migrant workers.

A full 11 years after Qatar was handed the right to host the tournament by Fifa, the scrutiny shows no sign of abating. This year saw the first protests by players, with Germany, Norway and the Netherlands expressing their concerns over human rights before qualifying games, and it will be fascinating to see whether this continues, and whether British teams add their voices as the tournament looms into view.

Expect continued focus on football’s relationship with both the gambling industry and virtual currencies, and on vaccine hesitancy in the game, as all sports continue to grapple with the ramifications of the pandemic.

While it should be far less contentious than Beijing and Qatar, the Commonwealth Games in Birmingham will still be the biggest and most expensive sports event staged in Britain since London 2012, with lots at stake for organisers. And with the Commonwealth Games Federation preparing to overhaul the format of future events as it desperately seeks new hosts and renewed relevance, it could also be the last of its kind.

England’s staging of the postponed Euros meanwhile will be a significant opportunity for women’s sport, after so much progress in recent years. With the pandemic doing such harm to community sport and rates of physical activity over the past two years, the sense is that the opportunity for inspiration and legacy offered by Birmingham, the Euros – and another delayed event to be staged in England – the Rugby League World Cup – must be seized.

2021-12-31
Previous Post: Top tips on buying a cheap house in Italy from those who have bought one
Next Post: Costa Rican gymnast Luciana Alvarado ends Olympics floor routine with tribute to Black Lives Matter