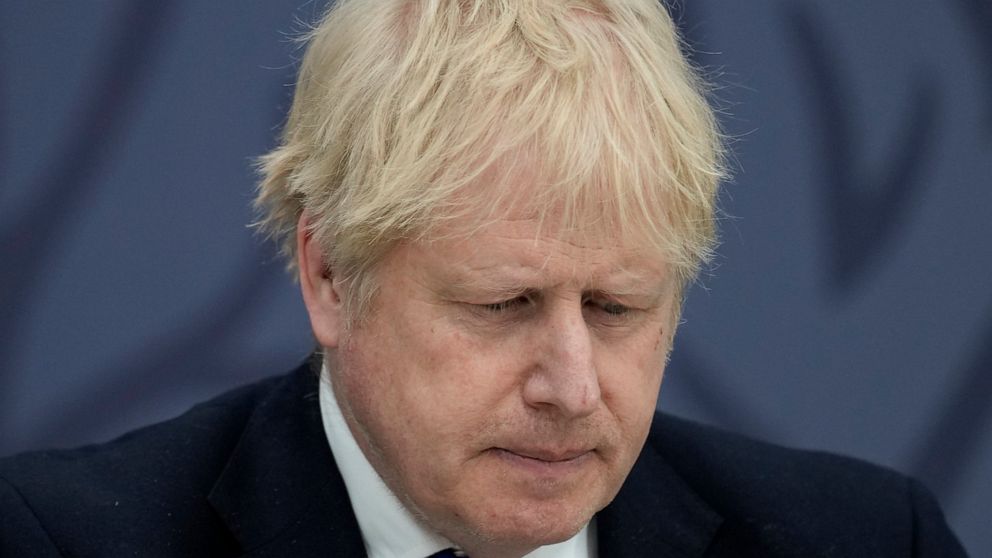 Johnson told lawmakers in the House of Commons “it did not occur to me” that the gathering was a party.

Police are still investigating several other parties in government buildings that Johnson is alleged to have attended.

THIS IS A BREAKING NEWS UPDATE. AP’s earlier story follows below.

LONDON (AP) — Prime Minister Boris Johnson is facing British lawmakers on Tuesday for the first time since he was fined by police for attending a birthday party in his office that broke coronavirus lockdown rules.

As the House of Commons returns from an 11-day Easter break, Johnson is expected to apologize for what he insists was a minor slip-up — but rebuff opposition calls to resign for flouting the restrictions that he imposed on the country during the pandemic.

The opposition Labour Party is trying to get lawmakers to censure Johnson over the “partygate” scandal. The Speaker of the House of Commons, Lindsay Hoyle, said he would allow Labour to hold a Commons debate and vote on whether Johnson should be investigated for allegedly misleading Parliament. Ministers found to have done that are generally expected to resign.

The vote is scheduled for Thursday. Before that, Johnson is expected to sound contrite, but argue that it would be wrong to change leaders while Britain faces crises including the war in Ukraine and a cost-of-living squeeze driven by surging energy and goods prices.

Johnson and his Conservative government have faced growing outrage since allegations surfaced late last year that he and his staff held office parties in 2020 and 2021 when millions in the country were barred from meeting with friends and family — or even attending funerals for their loved ones.

Johnson paid a 50-pound ($66) fine last week for attending his own surprise birthday party in Downing Street in June 2020. The penalty made Johnson the first British prime minister ever found to have broken the law while in office.

The fine followed a police investigation and a civil service probe into the gatherings. Johnson tried to bat away questions, first by saying there were no parties and then by insisting that he believed no rules were broken.

Cabinet Minister Brandon Lewis insisted Johnson wasn’t a liar and had always stated “what he believes to be the truth.”

“What he said to Parliament he believed to be true at the time,” Lewis said.

Johnson’s grip on power had appeared to be on a knife-edge earlier this year because of the scandal and the departure of several top aides. Allies feared “partygate” could become a tipping point for a leader who has weathered a series of other storms over his expenses and his moral judgment. Some Conservative lawmakers were openly calling for a no-confidence vote in their leader.

But Johnson has hung on, partly because Russia’s invasion of Ukraine distracted public and political attention.

Johnson’s international image, battered by Britain’s messy exit from the European Union under his leadership, has been revived by his firm military, political and moral support for Ukraine. Johnson traveled to Kyiv earlier this month to meet with President Volodymyr Zelenskyy.

Johnson could still face more fines. London’s Metropolitan Police force is investigating a dozen event, including “bring your own booze” office parties and “wine time Fridays,” organized by Johnson’s staff. So far at least 50 tickets have been handed out, including those to Johnson, his wife Carrie and Treasury chief Rishi Sunak.

If Johnson is sanctioned again, calls for a no-confidence vote could grow among Conservatives. For now, Conservative lawmaker Geoffrey Clifton-Brown said his colleagues were “withholding their judgment and waiting to see what happens.”

But fellow Conservative Tobias Ellwood, who heads the Commons Defense Committee, said the government “shouldn’t use the fig leaf of our involvement with Ukraine to somehow say this is not a time to address those difficult challenges.”

He said the party should hold a no-confidence vote to determine whether “the prime minister has support and we march forward, or it is time for change.”