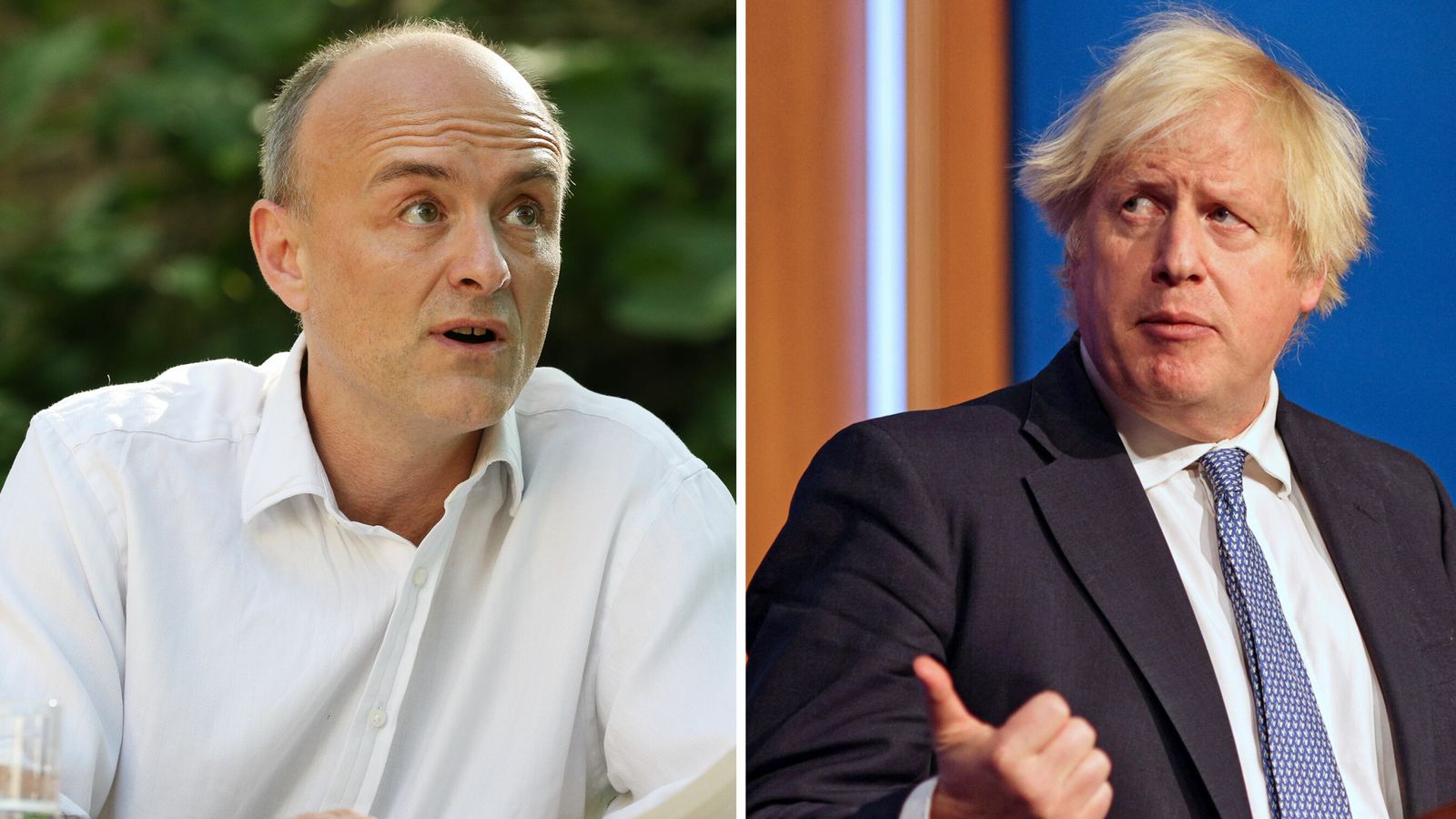 Dominic Cummings says he raised his concerns about the 20 May 2020 event in the Number 10 garden directly with Boris Johnson and would “swear under oath this is what happened”.

Boris Johnson’s former chief adviser has said the prime minister knew in advance about a Downing Street drinks party during the first coronavirus lockdown and agreed that it could go ahead, claims that have been confirmed to Sky News by a second source.

In an updated post on his Substack page, Dominic Cummings said he raised his concerns about the event in the Number 10 garden in May 2020 directly with the PM and would “swear under oath this is what happened”.

“PM was told about the invite, he knew it was a drinks party, he lied to parliament,” he wrote on Twitter, posting a link to the latest entry.

Mr Johnson’s principal private secretary Martin Reynolds emailed officials with an invite to the event on 20 May, suggesting attendees “BYOB” (bring your own bottle, or booze).

The emergence of this email has provoked anger and led to calls, including from some Conservative MPs, for the PM to resign.

If it is established that Mr Johnson knew in advance about the party and lied to parliament in saying he believed it was a “work event”, he would be in much greater danger of being forced out of office.

The 20 May event is the latest in a string of reported gatherings in Downing Street and other government departments during COVID restrictions in 2020 and 2021 that is being investigated.

Among the latest to make headlines were two parties held in Downing Street on the eve of Prince Phillip’s funeral last year.

A second Downing Street source has told Sky’s political editor Beth Rigby that the PM was warned about the 20 May gathering before it took place.

But Downing Street said earlier on Monday it was not true that Mr Johnson was warned about it in advance and repeated the PM’s assertion to MPs last week that he “implicitly” believed it was a work event.

Number 10 has repeated this denial in the wake of Mr Cummings’ latest post.

Mr Cummings left Number 10 in November 2020 and has since been a persistent critic of Mr Johnson.

‘You’ve got to grip this madhouse’

In his Substack post, Mr Cummings said he warned Mr Reynolds that his email “broke the rules” and also raised his concerns directly with the PM.

“Amid discussion over the future of the cabinet secretary and PPS himself, which had been going on for days, I said to the PM something like: ‘Martin’s invited the building to a drinks party, this is what I’m talking about, you’ve got to grip this madhouse’,” he wrote.

“The PM waved it aside.”

Mr Cummings claimed Number 10 is “throwing out as much confusing chaff as possible, such as nonsense about a ‘drinking culture’ intended to shift blame” as pressure on the PM continues.

But he said MPs should “focus on the basics” over the 20 May gathering.

“The PM’s PPS [principal private secretary] invited people to a drinks party. The PPS was told to cancel the invite by at least two people.

“He checked with the PM whether the party should go ahead. The PM agreed it should.

“They both went to the party. It was actually a drinks party.

“The PM told MPs repeatedly that he had no idea about any parties.

“The events of 20 May alone, never mind the string of other events, mean the PM lied to parliament about parties.

“Not only me but other eyewitnesses who discussed this at the time would swear under oath this is what happened.”

Where are we at in the “partygate” row?

A Cabinet Office inquiry, led by senior civil servant Sue Gray, is continuing to examine evidence around several gatherings that may have broken COVID rules in place at the time.

The findings of her investigation could come this week at the earliest, but publication of her report could slip into next week in light of the latest revelations.

Anger and upset among Tory MPs appears to be growing, with Tim Loughton becoming the sixth backbencher to publicly demand Mr Johnson resigns over the “terminal damage” the revelations have done to his reputation.

Party insiders have estimated about 20 Tory MPs have submitted letters of no confidence in the PM to the 1922 Committee of Tory MPs, the Daily Telegraph reported.

A formal vote of no confidence will be held if 54 letters are submitted.

What has been the reaction to these latest claims?

Pat McFadden, Labour’s shadow chief secretary to the Treasury, said if Mr Cummings’ claims are true, then the “tattered fig leaf” of the PM’s defence that he thought the 20 May gathering was a “work event” will have been “blown apart”.

Ian Blackford, the SNP’s leader at Westminster said Mr Cummings is a “key witness” in the Cabinet Office investigation and if he is not interviewed as part of it then the inquiry “will not be worth the paper it is written on”.

Conservative MP Andrew Bridgen, who has called for Mr Johnson to resign, told Sky News that “clearly someone is not telling the truth” and “if that turns out to be Boris Johnson, then that is terminal”.

“Misleading parliament, misleading the public as prime minister, that’s a cardinal sin and that will be career-ending for him,” he said.

Also speaking to Sky News, former attorney general Dominic Grieve said the PM has “undoubtedly lied” about his knowledge of Downing Street parties and “the evidence of his dishonesty is overwhelming”.

Conservative MP Craig Mackinlay said he has not sent a letter calling for a no-confidence vote in the PM, but acknowledged the government is going through a “very rough period” and Mr Johnson has been “found wanting”.

Fellow Tory Mark Logan, who represents Bolton North East, said the PM has “a lot of convincing to do” and needs to “speak from the heart” to get things back on track.