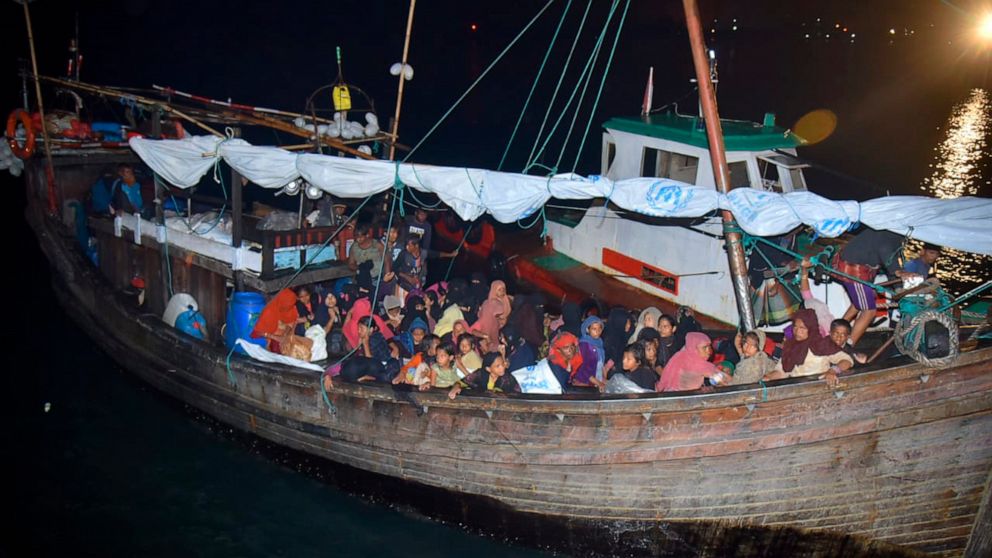 LHOKSEUMAWE, Indonesia — A group of 120 Rohingya Muslims disembarked from a boat that had drifted for days off Indonesia’s northernmost province of Aceh and was towed by a navy ship into port, officials said Friday.

The refugees’ wooden boat was reportedly leaking and had a damaged engine. Efforts to rescue its passengers, who are overwhelmingly women and children, began after Indonesia’s government on Wednesday said it would allow them to dock because conditions on the boat were so severe.

The broken-down boat was towed by a navy ship early Thursday from its location about 53 miles (85 kilometers) off the coast of Bireuen, a district in Aceh, toward Krueng Geukueh seaport in neighboring Lhokseumawe, a coastal town in the North Aceh district, said navy western fleet command spokesman Col. La Ode M. Holib.

High waves and bad weather hampered the rescue operation, and the navy ship was moving 5 knots (5.7 miles) per hour to keep the towed boat from capsizing, Holib said. The boat docked safely just after midnight Friday.

Authorities used buses to move the Rohingya refugees from the port to a nearby warehouse, providing temporary shelter amid heavy monsoon rains. The refugees will all be tested for the coronavirus, Holib added.

The boat was first sighted by local fishermen on Sunday about 60 miles (96 kilometers) off the coast of Bireuen, said Badruddin Yunus, the leader of the local tribal fishing community. He said fishermen provided food, water and clothes to the passengers, including 60 women, 51 children and nine men, who said they wanted to go to Malaysia and had been at sea for 28 days before the boat’s engine broke down.

Videos obtained by The Associated Press from the Indonesian navy showed the refugees’ wooden boat packed with dozens of members of the Rohingya ethnic community floating at sea. Women and children onboard cried out for help as the navy ship approached their boat, and officers in an inflatable boat were delivering food and other supplies to them.

The United Nations refugee agency said it was ready to assist Indonesia’s government and local community in preparing for the Rohingya, including establishing a quarantine process in line with international public health protocols amid the pandemic.

More than 700,000 Rohingya Muslims have fled from Buddhist-majority Myanmar to refugee camps in Bangladesh since August 2017, when the Myanmar military launched a clearance operation in response to attacks by a rebel group. Myanmar security forces have been accused of mass rapes, killings and the burning of thousands of homes.

Groups of Rohingya have attempted to leave the crowded camps in Bangladesh and travel by sea in hazardous voyages to other Muslim-majority countries in the region.

Muslim-dominated Malaysia has been a common destination for the boats, and traffickers have promised the refugees a better life there. But many Rohingya refugees who land in Malaysia face detention.

Although Indonesia is not a signatory to the United Nations’ 1951 Refugee Convention, the UNHCR said that a 2016 presidential regulation provides a national legal framework governing the treatment of refugees on boats in distress near Indonesia and to help them disembark.

These provisions have been implemented for years, most recently in June when 81 Rohingya refugees were rescued off the coast of East Aceh.