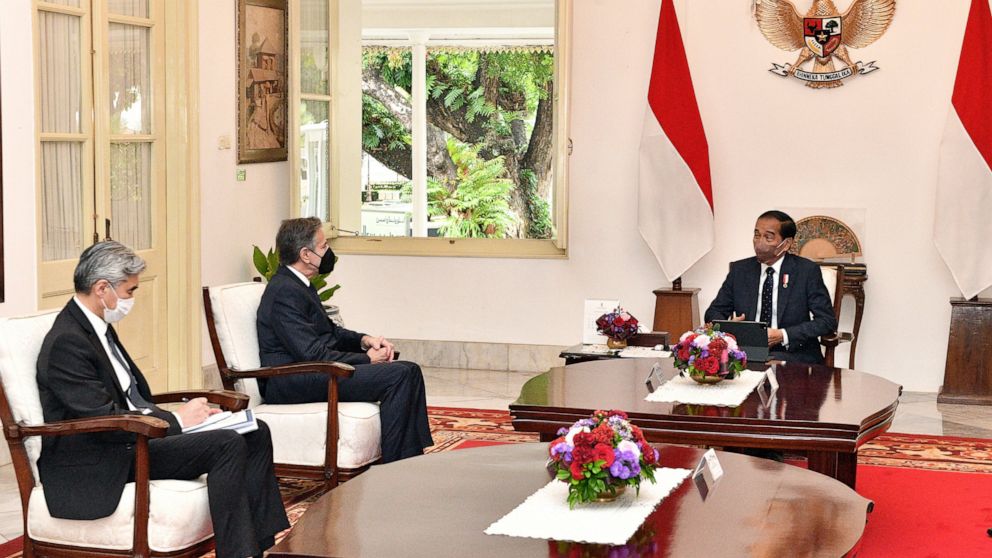 U.S. Secretary of State Antony Blinken says the United States will expand its military and economic relationships with partners in Asia to push back against China’s increasing assertiveness in the Indo-Pacific

JAKARTA, Indonesia — The United States will expand its military and economic relationships with partners in Asia to push back against China’s increasing assertiveness in the Indo-Pacific, U.S. Secretary of State Antony Blinken said Tuesday.

Blinken said the Biden administration is committed to maintaining peace and prosperity in the region and will do that by boosting U.S. alliances, forging new relationships and ensuring that the U.S. military maintains “its competitive edge.”

“Threats are evolving, our security approach has to evolve with them. To do that, we will lean on our greatest strength: our alliances and partnerships,” Blinken said in a speech in Indonesia, outlining the administration’s Indo-Pacific plans.

“We’ll adopt a strategy that more closely weaves together all our instruments of national power — diplomacy, military, intelligence — with those of our allies and partners,” he said. That will include linking U.S. and Asian defense industries, integrating supply chains and cooperating on technological innovation, he said.

“It’s about reinforcing our strengths so we can keep the peace, as we have done in the region for decades,” he said. He did not elaborate further but the administration made waves earlier this year by agreeing to a pact that will see Australia produce nuclear-powered submarines.

Blinken insisted that the U.S. is not trying to force countries to choose between the United States and China or seeking conflict with China. But he laid out a litany of complaints about “Beijing’s aggressive actions” from “Northeast Asia to Southeast Asia and from the Mekong River to the Pacific Islands.”

Blinken is in Indonesia on the first leg of a week-long, three-nation tour of Southeast Asia that will also take him to Malaysia and Thailand. Countering China’s growing aggressiveness in the region, particularly in the South China Sea, in Hong Kong and against Taiwan is prominent on his agenda.

“Countries across the region want this behavior to change,” he said. “We do too.”

“We are determined to ensure freedom of navigation in the South China Sea,” he said. “It is also why we have an abiding interest in peace and stability in the Taiwan Strait.”

Blinken said U.S. “will forge stronger connections” with its five treaty allies in the region — Australia, Japan, the Philippines, South Korea and Thailand — boost ties between them and cultivate a stronger partnership with the Association of Southeast Asian Nations, many of whose members feel threatened by China.

“A strong and independent ASEAN has long been central to tackle urgent crises and long-term challenges,” Blinken said, in particular calling out the military rulers of Myanmar, also known as Burma, for their February takeover and subsequent crackdown on protesters.

“We will continue to work with our allies and partners to press the regime to cease its indiscriminate violence, release all of those unjustly detained, allow unhindered access, and restore Burma’s path to inclusive democracy,” he said.

Blinken also lauded the administration’s commitment to providing coronavirus vaccines to the countries of the Indo-Pacific and its support for their efforts to combat and deal with climate change.

Blinken confined his remarks to the Indo-Pacific and China although he began his current overseas journey in Britain at a Group of Seven foreign ministers meeting that delivered a stern warning to Russia over Ukraine.