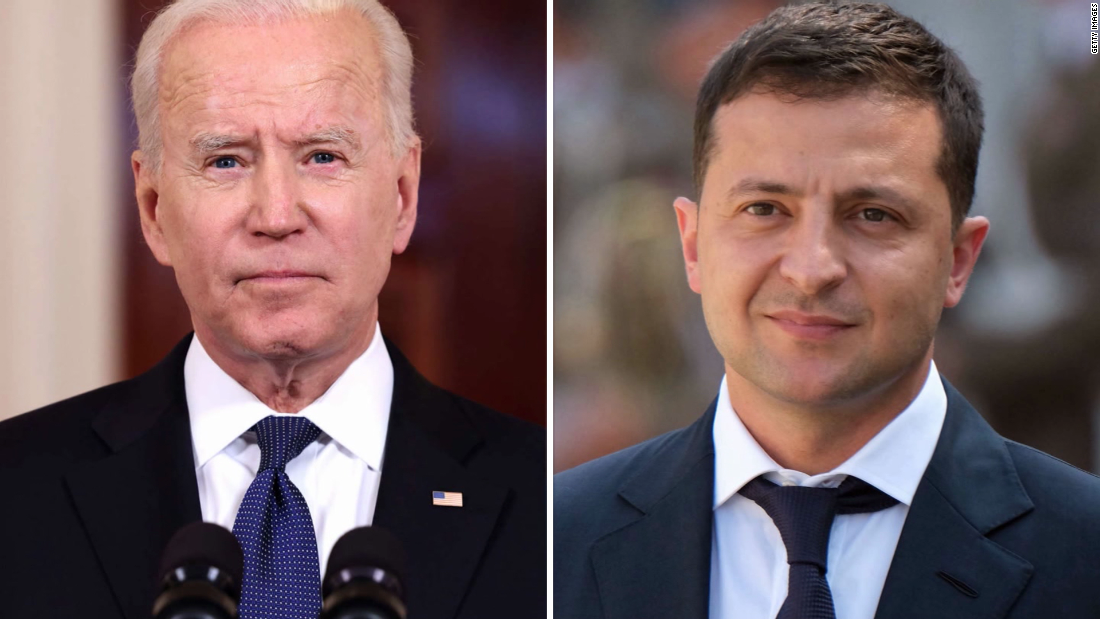 Biden to speak with Ukrainian president as US warns against Russian

Biden, a White House official said, “plans to speak by phone with President Zelensky of Ukraine on Sunday to reaffirm US support for Ukraine’s sovereignty and territorial integrity, discuss Russia’s military build-up on Ukraine’s borders, and review preparations for upcoming diplomatic engagements to help de-escalate the situation in the region.”

The call comes days before Russian and US officials are set to meet in person in Geneva on January 10 amid a Russian military buildup on the Ukraine border and ongoing tensions. Zelensky spoke with US Secretary of State Antony Blinken ahead of the call earlier this week.

Biden said Friday he made it clear in his call with Putin that there will be a “heavy price to pay” if Russia invades Ukraine.

“We made it clear to President Putin that if he makes any more moves, goes into Ukraine, we will have severe sanctions. We will increase our presence in Europe with our NATO allies, and it’ll just be a heavy price to pay for it,” Biden said after a New Year’s Eve lunch in Wilmington, Delaware.

Biden said that Putin has agreed to three upcoming conferences in Europe, including US-Russia diplomatic talks led by US deputy Secretary of State Wendy Sherman on January 10 in Geneva and Russia-NATO talks on January 12.

“What I got the sense of is he’s agreed that we would have three major conferences in Europe beginning the middle of the month with our senior staffs that relate to the OSCE (Organization for Security and Co-operation in Europe), the Russia-NATO council as well as continuation of discussions on our strategic doctrine. And so he did not disagree with any of that,” Biden said.

He said that both sides laid out their concerns, “but I made it clear that it only could work if he deescalated, not escalated.”

During his call with Putin on Thursday, Biden urged him to take steps to ease the crisis on Russia’s border with Ukraine, warning again of dire economic consequences should Putin proceed with an invasion. Putin told Biden that introducing a new round of sanctions against Russia would amount to a “colossal mistake” that could lead to a complete breakdown of relations between the two countries, a Kremlin aide said.

The 50-minute phone call did not yield any major breakthroughs, US and Russian officials said afterward, but did establish the tenor for the upcoming in-person diplomatic talks.

Blinken spoke Friday with NATO Secretary General Jens Stoltenberg “about upcoming engagement with Russia in the NATO — Russia Council and the U.S. — Russia Strategic Stability Dialogue,” according to a readout from State Department spokesperson Ned Price.

“The Alliance stands ready for meaningful dialogue with Russia, while standing united to deter further aggression against Ukraine,” the readout said.

During his call with Biden, Putin again offered little clues to his intentions, officials said. Instead, the two men held what a US official described as a “serious and substantive” discussion, during which Biden laid out two paths for Putin as he continues to amass Russian troops on the border with Ukraine: one a diplomatic route toward de-escalation and one focused on deterrence using economic sanctions, enhanced US troop presence on NATO’s eastern flank and increased assistance to Ukraine.

Which path is chosen “will depend on Russia’s actions in the period ahead,” the official said, saying there would be “serious costs and consequences” should Russia proceed with its regional aggression.

Biden also told Putin the US did not plan to deploy offensive weapons in Ukraine, Ushakov said.

Putin “noted that this is one of the key points included in the draft [on security guarantees Russia seeks],” Ushakov added.

As many as 100,000 Russian troops have remained amassed at the Ukrainian border, despite warnings from Biden and European leaders of serious consequences should Putin move ahead with an invasion. US officials also say Moscow is engaged in a massive disinformation campaign meant to undermine Ukraine’s government ahead of that country’s national elections.

This story has been updated with additional information Friday.

2022-01-01
Previous Post: South Africans line up to pay their last respects to Desmond Tutu : NPR
Next Post: Stocks could ride the 2021 tailwind into the new year, but the jobs report and Fed will be in focus