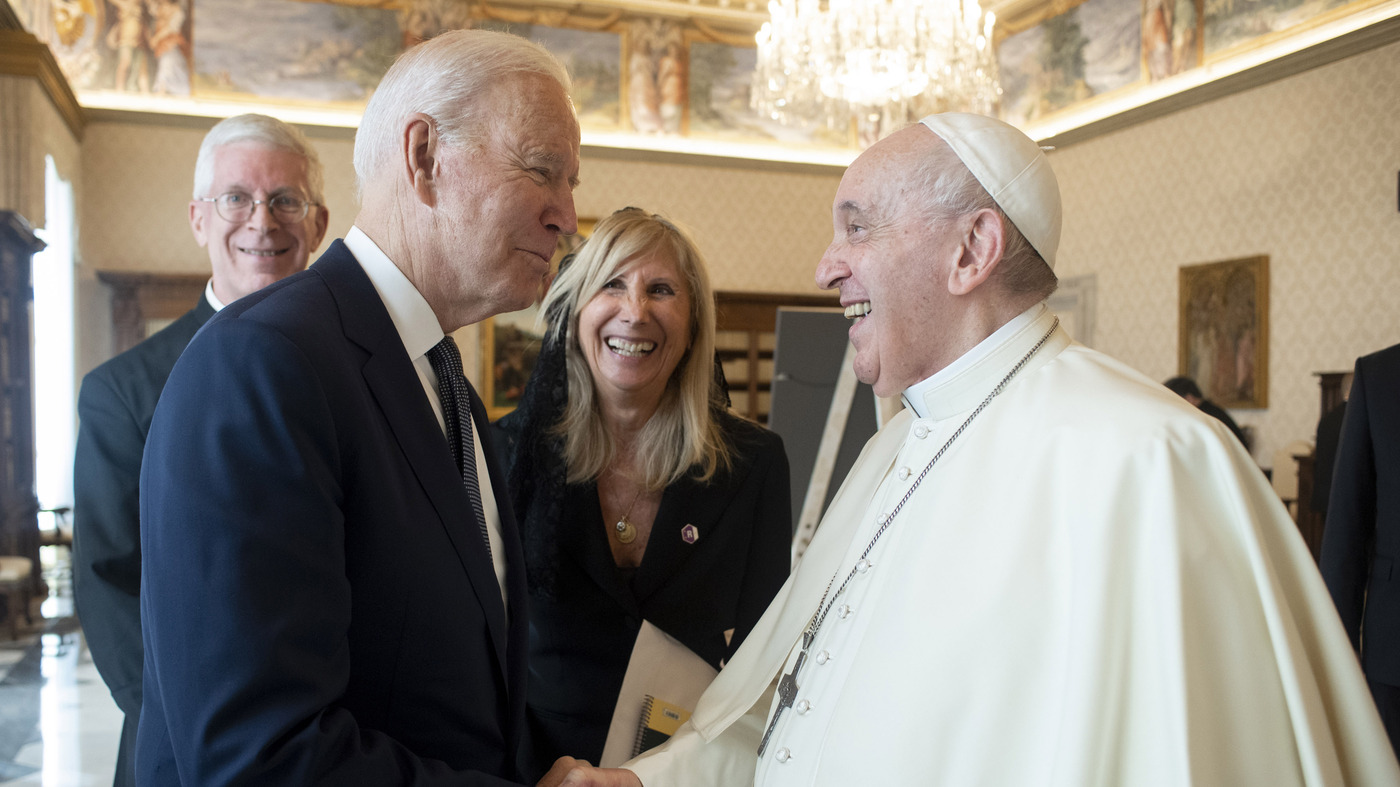 President Biden shakes hands with Pope Francis as they meet at the Vatican on Friday.

President Biden shakes hands with Pope Francis as they meet at the Vatican on Friday.

VATICAN CITY — President Biden, a devout Catholic who has nonetheless found himself at odds with many faithful over his support of abortion rights, met Friday at the Vatican with Pope Francis, where the leaders discussed climate change, the coronavirus pandemic and global poverty.

The president later said that the pope also expressed support for Biden’s continuing to receive Communion despite some U.S. bishops suggesting the president should be denied the Eucharist because of his views on abortion and same-sex marriage, which run counter to mainstream Catholic thought.

At the start of his European tour, Biden and first lady Jill Biden were greeted in the cobblestone courtyard by Vatican officials. A line of Swiss Guards stood at attention to the side, and an American flag flew over the doorway.

The president went down the receiving line, shaking hands and at one point, he introduced himself saying, “I’m Jill’s husband.”

Among those accompanying the Bidens in the U.S. delegation are Secretary of State Antony Blinken and National Security Advisor Jake Sullivan.

Friday’s meeting, which lasted roughly an hour and a half, marks only the second time a Catholic U.S. president has met the pontiff. The first was President John F. Kennedy. Biden, as a staunch Roman Catholic, was approaching the meeting as both a diplomatic and personal engagement, according to the White House.

The White House said Biden’s private visit with Pope Francis was to be followed by a delegation meeting to discuss major, mutual topics.

Biden lauds the pope’s leadership on climate, the pandemic and his work to end poverty

“In his audience with Pope Francis today, President Biden thanked His Holiness for his advocacy for the world’s poor and those suffering from hunger, conflict, and persecution,” the White House said in a statement.

It added that Biden lauded the pope’s leadership “in fighting the climate crisis, as well as his advocacy to ensure the pandemic ends for everyone through vaccine sharing and an equitable global economic recovery.”

The one-on-one between the two leaders coincided with an urgent appeal issued by Francis ahead of a United Nations climate conference that begins on Sunday.

Noting the upheaval also from the COVID-19 pandemic, the pope called on the U.N. to take “radical decisions” to safeguard the environment and to place global concerns over the interests of individual nations.

“The most important lesson we can take from these crises is our need to build together, so that there will no longer be any borders, barriers or political walls for us to hide behind,” he said in his “Thought for the Day” on the BBC’s morning radio program.

Biden gave Francis a challenge coin with the seal of the United States on one side and the insignia of the president’s late son Beau Biden’s Delaware National Guard unit on the other. The president told the pontiff that such coins are given to “warriors and leaders.”

“You are the most significant warrior for peace that I have ever met, and with your permission I’d like to be able to give you a coin,” Biden said.

“Now the tradition is, and I’m only kidding about this, that next time I see you, you don’t have it, you have to buy the drinks. I’m the only Irish man you’ve ever met who’s never had a drink,” Biden said.

The pope responded with a laugh saying he wants whiskey.

The president described his meeting with the pope as “wonderful.”

Biden later said he and the pope discussed climate change, but not abortion. The president’s stance on abortion and support of same-sex marriage has prompted calls within the U.S. Conference of Catholic Bishops to deny him Holy Communion.

In the past, Francis has warned against politicizing the Eucharist and has said that he has never denied Communion to anyone.

Biden said the pontiff did voice support for him continuing to receive Communion, but he declined to say whether the two had specifically talked about the calls to deny him the Eucharist.

“We just talked about the fact that he was happy I was a good Catholic and keep receiving Communion,” Biden said.

Access by White House photographers during the one-on-one between the two leaders was to be limited and images of the meeting were only going to be distributed by the Vatican.

This move drew criticism from the White House Correspondent’s Association President Steven Portnoy, who tweeted, “It is deeply unfortunate that WH news photographers won’t be permitted to capture pictures of Biden with the pope today.”

Biden is also meeting with other global leaders

After the president’s visit to the Vatican, he will go on to meet with other global leaders at the G20 summit and then COP26 climate summit in Glasgow.

He later proceeded to a meeting with Italy’s Prime Minister Mario Draghi. The White House said that a vehicle in the president’s motorcade was involved in a minor accident on the way to the premier’s palace. It said there were no serious injuries and that out of “an abundance of caution,” passengers were evaluated by U.S. medical personnel.

Biden ends the day meeting with French President Emmanuel Macron, where the two are likely to discuss a controversial nuclear submarine deal between the U.S., United Kingdom and Australia that has angered France. The pact caused Australia to cancel an agreement to buy non-nuclear submarines from Paris.