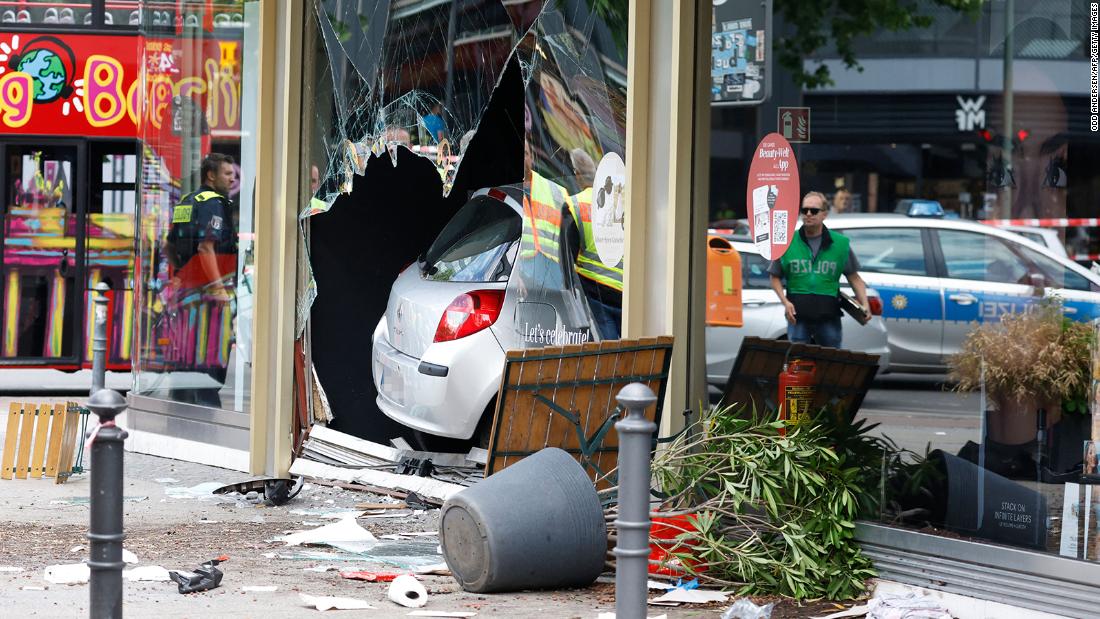 Berlin: One person dead, six with life-threatening injuries after car driven into crowd

The driver, identified by police as a German-Armenian national, ploughed into pedestrians on a sidewalk around 10:30 a.m. near Kaiser Wilhelm Memorial Church, a well-known Berlin landmark. The car then crashed into a shop window on an adjoining street, according to the city’s police and fire department.

Iris Spranger, Berlin’s top security official, said the woman killed was a teacher accompanying a group of high school students on a trip from the German state of Hesse.

Fourteen of those students are among the injured, Berlin police said, adding that their relatives have been informed.

Six people sustained life-threatening injuries and three others were seriously hurt, the Berlin fire department said. In total, 17 people have been injured, it said.

The driver was apparently detained by members of the public at the scene and then arrested by a police officer in the area, Berlin police spokesman Thilo Cablitz said. Police are trying to determine whether the man deliberately rammed into the crowd or whether it was an accident, possibly due to a medical emergency, he added.

The suspect is currently in the hospital, Berlin Police President Barbara Slowik said in a news conference on Wednesday afternoon.

“We currently do not have conclusive evidence for a politically motivated act,” Slowik said.

Police have called on members of the public to submit videos or images from the scene so that officers can review them for clues.

Investigators are in the process of searching the man’s car, a small silver Renault, but there was no letter of confession found inside the vehicle, as previously reported by some local media outlets, Spranger said.

“I am told there are posters in the car but there are no actual letters of confession. But one needs to be very careful with such statements,” Spranger added.

More than 130 emergency services personnel responded to the incident, Berlin’s mayor, Franziska Giffey, said in a post on Twitter thanking them for their quick action.

“I am deeply affected by this incident. We know that there is one dead and there are several seriously injured. The police are working urgently to clarify the situation,” Giffey tweeted.

Videos and images shared on social media showed blankets covering what appeared to be a body in an area cordoned off by police and a helicopter circling above.

Scottish-American actor John Barrowman, who was at the scene, said that the car careened onto the pavement and hit people before crashing into a storefront window. “I heard the bang and the crash when we were in a store and then we came out and we just saw the car,” he said in a video posted on Twitter, adding that he saw a number of people with injuries.

Wednesday’s incident unfolded near the spot of a fatal attack on December 19, 2016, when Anis Amri, a Tunisian national with Islamist terrorist links, rammed a tractor trailer truck into a crowded Christmas market, killing 12 people and injuring 48. Amri was later shot dead by police in Italy.
2022-06-08
Previous Post: Photos: the aftermath of the 9/11 attack
Next Post: Report: 2020 is deadliest year for `environmental defenders’