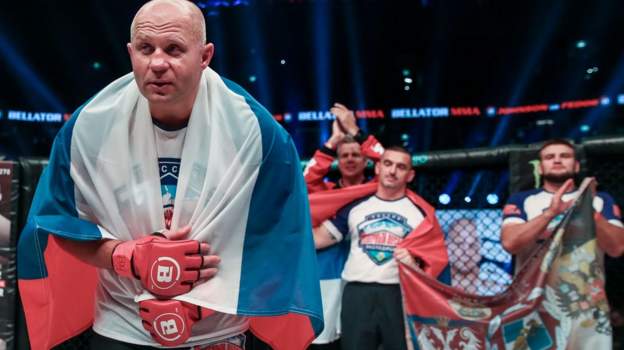 The report below contains details of what happened at Bellator 269. You can watch the entire event again on BBC iPlayer (UK only) here.

Russian MMA icon Fedor Emelianenko rolled back the years in front of a home crowd as he knocked out the number two-ranked heavyweight Tim Johnson in the main event of Bellator 269.

Emelianenko, 45, was making his first competitive appearance on home soil in five years, but he proved that – despite his plans to retire from the sport in the near future – he remains a serious threat to Bellator’s top heavyweights.

The bout started with both men sizing each other up and testing the range, but when the action started in earnest it was Emelianenko – known as ‘The Last Emperor’ – who delivered in emphatic fashion.

With Johnson pushing forward to apply pressure, Emelianenko unleashed a stunning three-punch combination, with the final shot sending Johnson, 36, crashing to the canvas for a spectacular knockout.

Emelianenko’s knockout of Johnson took his career win tally to 40, with 31 of those victories coming inside the distance.

And this victory now puts Emelianenko in a position to potentially challenge for championship gold one more time before he announces his retirement.

“It’s a huge event for us,” he said, about fighting in his home country. “It’s been a while since I last fought in Russia, so it is a very big deal and I’m happy that we managed to be successful.”

Former Bellator heavyweight champion Vitaly Minakov’s hopes of a victorious return to the cage ended in disappointment as he suffered a fight-ending injury in his co-main event bout with American Said Sowma.

Making his first appearance since August 2019, Minakov, 36, dominated the opening round against Sowma, using his heavy-handed striking to force the smaller man onto the back foot.

But in round two Sowma, 28, switched tactics and targeted Minakov’s lead leg with a series of punishing calf kicks that clearly troubled the former champion.

In the final round Minakov dislocated a finger when he caught the top of Sowma’s head with a punch and referee Bryan Miner stopped the fight then called in the doctor to help the Russian reset the digit.

Minakov wanted to continue but, with the bout already waved off, Sowma was awarded the TKO victory.

Undefeated lightweight Usman Nurmagomedov completely dominated Finland’s Patrik Pietila to improve his perfect professional record to 14-0, then called on Bellator’s matchmakers to hand him a bout with a top 10-ranked opponent.

With his cousin, former UFC lightweight champion Khabib Nurmagomedov, in his corner, the 23-year-old hurt Pietila with a hard calf kick and swiftly took his man to the canvas.

With the action on the mat, Nurmagomedov battered the Finn with ground strikes before eventually locking up a rear-naked choke to claim the fourth submission victory of his career.

Speaking through a translator after the fight, Nurmagomedov said: “I’m asking Bellator to give me someone from the top 10 because the amount of haters are increasing.”

Tokov, 31, was dropped to the canvas with the rangy Davlatmurodov’s first punch of the fight, but the Russian contender bounced straight back up and settled into his work.

Tokov’s victory extended his winning streak to six fights and gave him the 30th win of his professional MMA career.

It also puts the Russian star in the mix for a shot at the middleweight title held by Dutch champion Gegard Mousasi, and the former ACB champion said: “I believe I deserve a title shot, though in this particular fight I couldn’t show everything that I am capable of.”

In the opening fight of the night, Birmingham featherweight Aiden Lee picked up an impressive victory with a first-round submission finish of Russia’s Alexander Osetrov.

Lee, who was looking to bounce back from his submission defeat to hot prospect Aaron Pico in June, claimed his third win under the Bellator banner.

“I was comfortable on the feet, but I knew I had a big advantage on the ground against him.”

It wasn’t as memorable a night for Ireland’s Brian Moore and Scotland’s Rab Truesdale, however.

Moore, 34, was defeated 29-28, 29-28, 29-28 on the scorecards after his bantamweight preliminary card bout with Russian prospect Nikita Mikhailov went the distance.

Truesdale, 35, appeared in the night’s featured preliminary card bout, but was finished via ground-and-pound TKO by Russian heavyweight Kirill Sidelnikov.