By: Laura King
In: Uncategorized
With: 0 Comments 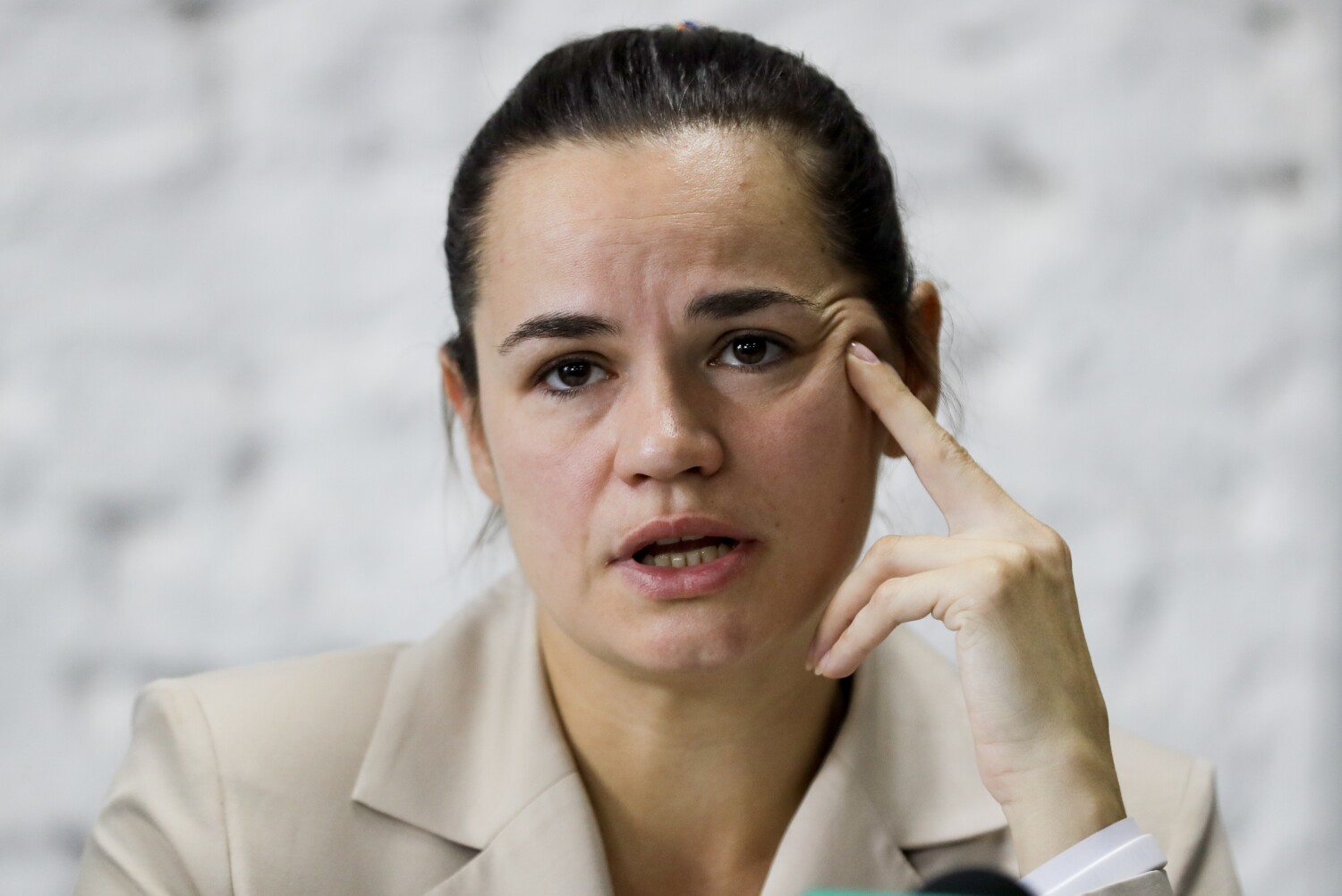 Only a year ago, Sviatlana Tsikhanouskaya was known mainly as the wife of a prominent Belarusian blogger and opposition activist who was summarily jailed after declaring his intention to run for president.

A political neophyte, she stepped into the race on his behalf, garnering heavy support in an Aug. 9 vote, but the country’s president of 27 years, Alexander Lukashenko, backed by the full weight of the state, declared himself the landslide winner.

Ordinary Belarusians and the international community alike deemed the election stolen. Weeks of mass protests erupted in the capital, Minsk, and elsewhere in Belarus, prompting a harsh crackdown by authorities and forcing Tsikhanouskaya into exile with her two children.

Now the 38-year-old is the face and voice of Belarus’ pro-democracy movement, meeting world leaders and rallying the opposition at home. On Wednesday, at the behest of supporters in Congress and elsewhere, she won a brief audience at the White House with President Biden. She will visit Los Angeles this weekend as part of a U.S. trip intended to build support for opposition calls for new elections in the former Soviet republic.

It’s an uphill battle. In recent months, the crackdown on pro-democracy activists in Belarus, including civil society and independent media outlets, has intensified. In a country of fewer than 9.5 million people, more than 35,000 have been arrested since August. Street protests have been stifled. Opposition organizers are routinely snatched from their homes in raids by security forces.

In recent months, Lukashenko’s government has engaged in brazen acts such as the May 23 forced landing of a Ryanair plane bound for Lithuania to arrest a dissident journalist aboard, Roman Protasevich, who was subsequently paraded before cameras to issue confessional statements that rights groups say were made under duress. That episode prompted U.S. and European Union sanctions against Belarus, which is saddled with an unwieldy Soviet-style economy dominated by near-moribund state-run industries, but has also become a nascent high-tech hot spot in recent years.

Tsikhanouskaya spoke Wednesday to the Los Angeles Times about the struggle that propelled her into the international limelight, why activists in Belarus believe they will prevail despite a concerted government campaign of arrest and abuses, and how her early life helped prepare her for this moment. The conversation was edited for length and clarity.

You never had political dreams, you’ve said, but here you are on the world stage, at the White House, representing your country’s democratic aspirations. How did that happen?

I think of it as somehow my fate, because I was never supposed to be in politics, and I don’t perceive myself as a politician. I’m a woman, a Belarusian, doing what she can. If I were in Belarus, I would write for samizdat [underground] newspapers, or take part in a strike committee. Everybody is doing whatever he or she can. I don’t feel I’m that important, or more important than anyone on the ground who continues to fight.

Over this last year, what moments stand out most vividly for you?

There were three days of hell after election day in Belarus, and when prisoners began to be released, the world saw broken bodies and broken heads. People were tortured, raped, humiliated. I never imagined we would be treated like this by our government. But another moment was positive, when I saw from Lithuania [to which Tsikhanouskaya was forced to flee days after the vote] hundreds of thousands of people outside on the streets together. It was such an astonishing moment.

Your husband, Sergei, remains jailed in Belarus. Are you able to speak with him at all?

We can communicate only through a lawyer, and now my beloved faces a so-called trial, a show. He is a strong person. He will never betray his values, I know this. I know he doesn’t have a lot of information from outside, but our lawyer tries to keep him informed about what is happening in the international arena. There are so very many prisoners like him. (This month in Geneva, a United Nations special rapporteur urged Belarus to immediately free about 530 people whom rights groups consider political prisoners.)

What in your past experiences helped prepare you for the role you have today?

My time in Ireland [a years-long series of summer stays beginning when she was a 12-year-old “Chernobyl child,” whose health was directly or indirectly affected by the 1986 nuclear catastrophe in neighboring Ukraine] opened a new world for me. I started to understand that people can live differently — they can be in their country and respect government, not be afraid of the police, and understand that there is a rule of law. We were deprived of all these things. The other thing is that I have a child with special needs, and for 10 years have had to try many kinds of rehab without knowing whether it would lead to success. So that taught me discipline — I do what I can, what I must, with the understanding that I need to be consistent and fulfill my responsibilities.

You have said you are constantly in touch with people at home who are involved in the struggle. What’s it like for them now?

I talk with people every day — workers, students, medics, activists, volunteers. They live in constant stress in case they are imprisoned. If that happens, who will look after their children, their old parents? It’s an everyday fear, and nobody can feel safe. At the same time, we are sure the regime is over. He [Lukashenko] will never gain legitimacy. He’s supported for now by law enforcement, but we know from talking to them that they act out of fear for their own families, we know that the morale in the ministries is bad. It’s impossible to support a sinking boat.

How important is backing from the United States?

The fact that we were accommodated at the highest level is a signal that the hugest democracy in the world is standing with us. The U.S.A. has the strongest voice in the world; if it is with us, other democracies will be with us. (After their brief White House encounter, which was not on his public schedule, Biden tweeted that it had been an “honor” to meet Tsikhanouskaya, and that the United States “stands with the people of Belarus in their quest for democracy and universal human rights.”)

What is next for you, personally and politically?

We talk a lot about the future. We are sure that Belarus will be a success story, but we will have to restore everything. We will need assistance after changes come. We can’t predict the coming months. Our task is to be ready for these changes. I’m not looking for political power. When democracy comes, there will be new candidates.

Can you ever unplug from all of this?

I try to spend weekends with my children — I don’t always succeed, but I need the time with them, weekends or whenever I can, especially now that I have been away from them for two weeks for this visit. Being with them is my very best source of calmness. We watch their daddy’s YouTube channel. I just need our time together.

2022-01-23
Previous Post: U.K. accuses Russia of plotting to install a pro-Kremlin leader in Ukraine : NPR
Next Post: Omicron hampers Broadway. Fewer tourists are there for just a score of shows