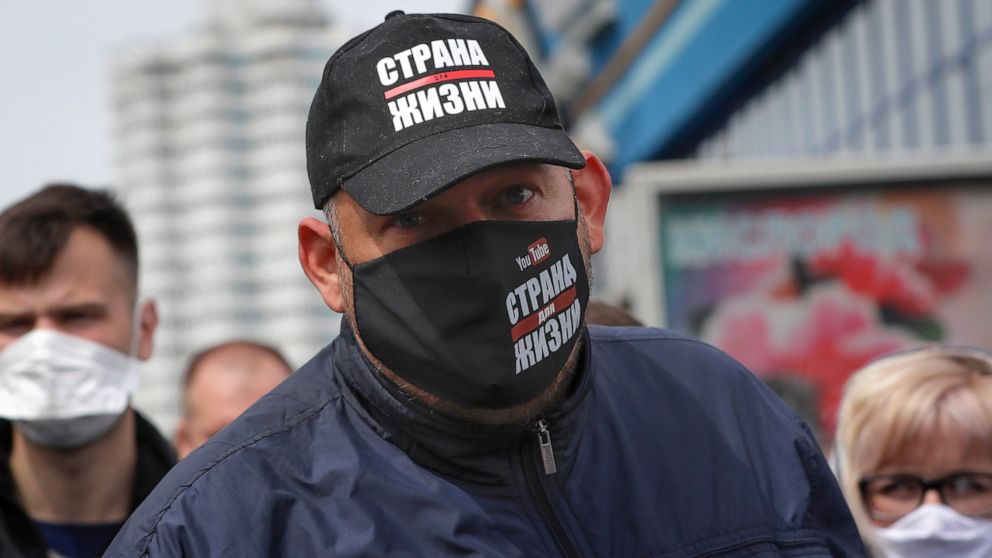 KYIV, Ukraine — A court in Belarus on Tuesday sentenced the husband of the country’s opposition leader to 18 years in prison, six months after the trial began behind closed doors. The charges against Siarhei Tsikhanouski included organizing mass unrest and inciting hatred and have been widely seen as politically motivated.

Five other opposition activists were sentenced to lengthy prison terms of 14 to 16 years alongside Tsikhanouski.

Tsikhanouski, 43, a popular video blogger and activist, planned to challenge authoritarian President Alexander Lukashenko in the August 2020 presidential election. He was widely known for the anti-Lukashenko slogan “Stop the cockroach.” He was arrested in May 2020, two days after he declared his candidacy.

His wife, Sviatlana Tsikhanouskaya, ran in his stead, drawing tens of thousands of people to rally in her support during the campaign. Official results of the vote handed Lukashenko a landslide victory and a sixth term in office, but were denounced by opposition and the West as a sham.

The results triggered a months-long wave of unprecedented mass protests, the largest of which saw some 200,000 people taking to the streets of the Belarusian capital of Minsk. Lukashenko’s government unleashed a violent crackdown on the demonstrators, arresting more than 35,000 and brutally beating thousands.

Tsikhanouskaya fled the country to Lithuania a day after the vote under pressure from the authorities. Other key opposition figures have also left the country, while some have ended up behind bars.

In recent months, pressure has mounted on Belarus’ non-governmental organizations, activists and journalists, with the authorities regularly conducting mass raids and detentions of those they suspect of supporting the anti-government protests. The majority of independent media outlets and rights groups in Belarus have now been shut down.

Commenting on the verdict in her husband’s case, Tsikhanouskaya told The Associated Press that “the dictator publicly retaliates against his strongest opponents, they’re being repressed for their desire to live in a free Belarus.”

“We will not stop and will continue the fight with the dictatorship in the center of Europe,” Tsikhanouskaya, who raises two children, added. “I don’t have the right to tell my children that they won’t see their father for so many years, because I don’t believe it myself.”

Siarhei Tsikhanouski has already spent 20 months behind bars. His trial was shrouded in secrecy, with court hearings held behind closed doors and lawyers bound by non-disclosure agreements.

Another popular blogger who also stood trial alongside Tsikhanouski, 29-year-old Ihar Losik, was handed a 15-year sentence. Losik was holding a hunger strike in jail to protest his prosecution.

U.S. ambassador to Belarus Julie Fisher said on Twitter that “it is clear whom the regime most fears.”

“The United States, alongside our partners, will continue efforts to secure the unconditional release of all political prisoners, including Siarhei Tsikhanouski, Ihar Losik and all those facing unjust detention and vengeful verdicts,” she wrote.

Germany Foreign Minister Annalena Baerbock called the verdict against the opposition leader in Belarus “scandalous” during a news conference Tuesday in Stockholm with her Swedish and Norwegian counterparts.

“They disgrace the rule of law and the international obligations of Belarus (with) this ruling,” Baerbock said, adding that Germany is calling for the immediate and unconditional release of all political prisoners in Belarus — “the 900 and also the two who were sentenced today.”