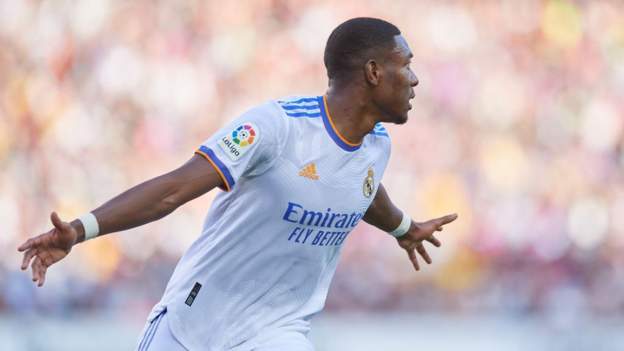 Real Madrid beat Barcelona in a new-look El Clasico to go top of La Liga and leave Ronald Koeman’s side down in eighth in the table.

It was the first Clasico without Barca icon Lionel Messi or Real legend Sergio Ramos – who both joined Paris St-Germain in the summer – since 2004.

David Alaba started and finished a counter attack for the first and Lucas Vazquez got a second in added time.

Sergio Aguero scored his first Barca goal but it was almost the last kick.

Alaba’s goal was the best of the game. The former Bayern Munich defender won the ball from Barca striker Memphis Depay on the edge of his box before starting a counter-attack.

He finished it off by running onto Rodrygo’s pass before slamming a shot across home keeper Marc-Andre ter Stegen into the far corner.

It was his first goal for Real Madrid, who he joined in the summer, on his El Clasico debut.

The final two goals came in injury time with Vazquez tapping in after Marco Asensio’s shot was saved by Ter Stegen.

Substitute Aguero buried Sergino Dest’s cross, in what was only Barcelona’s second shot on target, but the final whistle went seconds later.

Barca boss Ronald Koeman said he could not be under more pressure going into this game.

Well, he actually is now. They remain eighth, as close to 14th-placed Elche as new leaders Real.

Barcelona, in front of over 86,000 fans, put in a limp performance – with Real keeper Thibaut Courtois only making one save all afternoon.

It is a new-look Barca, with 17-year-old Gavi the youngest El Clasico starter since 1941 – but he had limited impact.

Koeman is only the second manager to lose his first three Clasicos as Barcelona boss – after Irishman Patrick O’Connell, who lost four between 1935 and 1940.

Carlo Ancelotti’s Real did not even have to play especially well to win at the home of their fiercest rivals and it is hard to imagine this Real team winning a Clasico against any other Barca team of the past 15 years.

Madrid have won four consecutive Clasicos for the first time since they managed seven in a row in the 1960s.

Unless something changes – and there is surely every chance they will face a different manager in the next meeting – they could break that run.