Barca will miss Messi but others get chance to shine, says Bayern’s Nagelsmann

Barca will miss Messi but others get chance to shine, says Bayern’s Nagelsmann 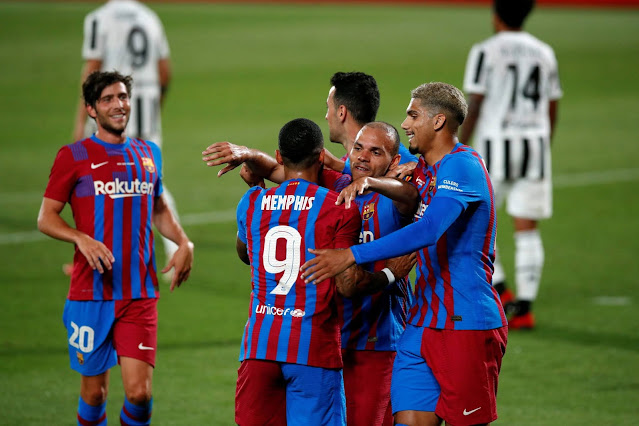 Lionel Messi’s departure leaves a big hole at Barcelona but will allow the club’s younger players to make a name for themselves, Bayern Munich coach Julian Nagelsmann said on Monday ahead of his team’s Champions League game against the Spanish side.

Barca was left reeling from the departure of Messi to Paris St Germain last month after the Spanish club was unable to afford to give their all-time top scorer a new contract.

Nagelsmann said things were changing at Barcelona after the Argentine forward’s exit but added that players like midfielders Pedri and Frenkie De Jong and forward Memphis Depay would get opportunities to shine.

“It’s difficult to say if they’re stronger or weaker, but they’re different. They don’t have that extravagant style anymore without Messi, but they have players who can step out of his shadow,” Nagelsmann told reporters ahead of Tuesday’s game.

“Barca have changed the structure of their defense, they’re pressing very high. That’s something they didn’t do with Messi at Barca in the past two to three years.

“Messi was a player who attracted the ball a lot. You always looked for him but now several players will have to take responsibility. They have an interesting mixture of young players that can develop.”

The last time the two sides met in the Champions League, Bayern thrashed Barcelona 8-2 in the quarter-finals en route to the title in the 2019-20 season but goalkeeper Manuel Neuer said that result would have no bearing on the game at the Camp Nou.

“So many things have changed in the meantime. We’re not thinking about that 8-2 win. We’re playing a new team, we have a new team,” Neuer said.

“We’ll obviously never forget our game in 2020, but these are two new group stage games and we’re looking forward to two big ones.”

Nagelsmann said Serge Gnabry would have to pass a late fitness test to play but Corentin Tolisso was left out due to a calf problem. Kingsley Coman is also in the squad but may not start the game.

The German coach said new signing Marcel Sabitzer needed more time to adapt to the team before the midfielder can make the starting lineup.

“Marcel has to acclimatize here,” Nagelsmann said. “He arrived two days earlier than those who traveled for the international break but only trained once with the squad before the RB Leipzig game.”

Ole Gunnar Solskjaer believes Manchester United finally have a squad to challenge for trophies on all fronts this season.

This summer has seen the big money arrivals of Raphael Varane, Jadon Sancho and Cristiano Ronaldo bring renewed optimism that the club can end a trophy drought that has lasted more than four years.

And with Manchester United preparing for their first Champions League game of the season at Swiss side Young Boys, the Manchester United boss insists this summer’s recruitment was part of a long-term strategy he initially outlined when he took the job a little under three years ago.

“We’ve had enough disappointments, that’s for sure, and some big moments as well,” he said. “But this team has grown and matured over the last few seasons.

“That was always the plan (when I came in), we said in three years’ time we’d have a squad with experience and quality that could challenge.

“With players like David (De Gea), Harry Maguire, who’s been here a couple of years, you get that spine in the team with experience and quality. With Raphael (Varane) and Cristiano (Ronaldo) coming in, they add to that.

“It’s not the last bit, you can never say it’s the last bit, but it’s that something that you have to buy unless you’ve already won it yourself.”

A return to contention for the biggest prizes could also help persuade Paul Pogba, now in the final year of his contract but back to playing some of his best football, to recommit to a club he had previously seemed certain to leave.

“It’s up to us to get results and to prove to ourselves that we can win trophies,” Solskjaer said when asked about Pogba.

The start of the Champions League campaign sees the intensity of the schedule ramp up again, with many players just back from international duty.

But Solskjaer sees the quality required to cope throughout his squad.

“The players are fitter now and we’ve been very robust over the years and improved with the way we’ve dealt with the pandemic and with the games coming thick and fast,” he said.

“With the ones we’ve signed it makes it easier to rotate and I’ve definitely told the team that as well – I do trust all the members of the squad.”

“I walked out into Manchester’s city centre on Saturday morning and I’ve not seen it as alive for five or 10 years. What he’s done to the Premier League for interest is exciting but for the city, he’s absolutely got it buzzing with excitement – and this was even before he scored the two goals.

“I was at Salford and saw the news that he scored. I could only imagine what the atmosphere was like and I spoke to a couple of people who were there and they said it was out of this world, bouncing like they’ve never seen it before. And, Salford scored in the last minute which meant it was the perfect football day.”

“For all the hype, this is the story of that boy Ronaldo and his ability with a ball. As Old Trafford revelled in his return, he cut through the noise with two goals and a match-winning turn in Manchester United’s 4-1 win over Newcastle.

“They have seen better individual performances from him here, but not for a long time, and never more remarkable than this. The expectation had been almost overwhelming but Cristiano Ronaldo did what he always does and now supporters will be wondering what it means for United’s prospects.

“Instantly, Ole Gunnar Solskjaer’s side are back on top, leading the way in the Premier League. With Ronaldo back in the building, back on the pitch, everything feels different.

“Now, they have a reason to believe they can stay there.”

2022-06-09
Previous Post: Gunman exposes the complexities of Taiwanese and Chinese identities : NPR
Next Post: U.S. Accelerates Expulsions of Haitian Migrants in May