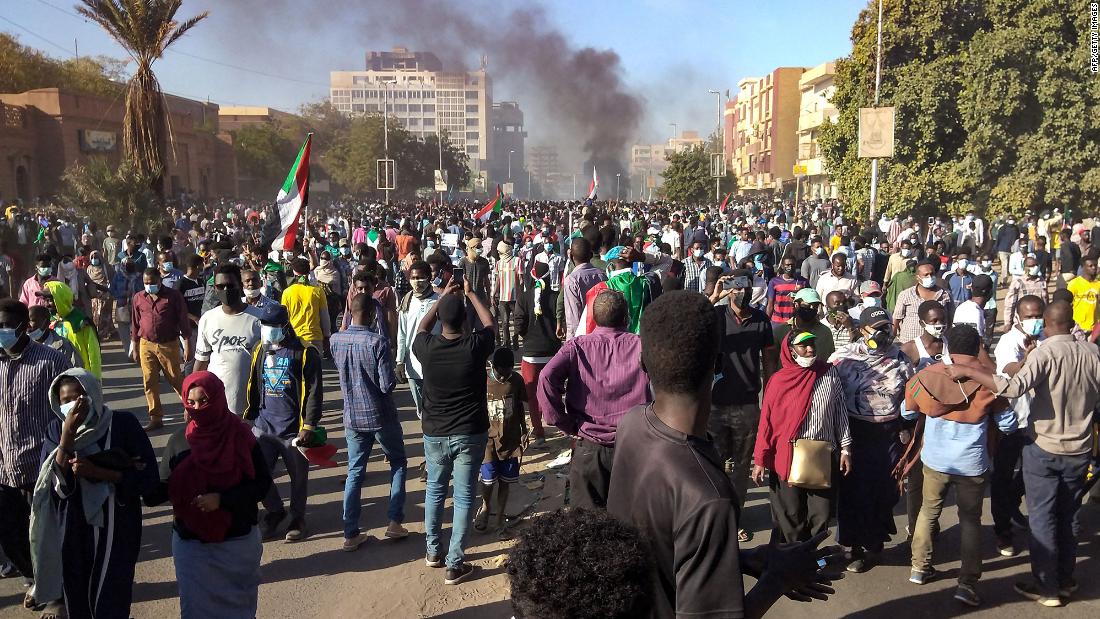 Authorities fired live bullets and tear gas at crowds in Omdurman, about 25 kilometers (16 miles) northwest of the capital, SCDC said in a statement. It added that a number of people had been injured and admitted into hospital.

In videos shared by activist groups, crowds of demonstrators can be seen running through plumes of white teargas smoke and dispersing from the sound of purported gunfire.

The SCDC called on “all medical personal and specialists” to support the critically injured and called out called out “militias” for obstructing the movement of ambulances and delaying medical teams ability in reaching the wounded.

Thursday’s protests mark the 11th day of mass demonstrations against military rule since the October 25 coup. At least 52 people have been killed by security forces since, the SCDC reported.

The US Embassy in Khartoum reiterated its support for “peaceful expression of democratic aspiration, and the need to respect and protect individuals exercising free speech,” in a tweet on Wednesday evening.

“We call for extreme discretion in use of force and urge authorities to refrain from employing arbitrary detention,” it said.

Thursday’s demonstrations were unfolding as Sudanese security forces sought to censor some broadcasters from reporting on them, according to accounts from multiple media outlets.

Authorities raided the offices of Saudi broadcaster al-Arabiya and its sister outlet al-Hadath, confiscating equipment and assaulting the staff in Khartoum on Thursday, al-Arabiya said in a series of tweets.

Earlier in the day, a Qatar-based TV station said its reporters were prevented from reporting on protests.

During a live televised broadcast Thursday, Asharq News correspondent Sally Othman apologized to viewers saying she couldn’t continue the broadcast because Sudanese authorities were stopping her from doing so.

“…Pardon me, I am not able to continue the reporting the authorities have prevented me just now from continuing, pardon me,” Othman said on air.

Hours later, Asharq News said that staff had been detained by security forces, posting an image of Othman with the message.

The US Embassy in Khartoum condemned Thursday’s violence, adding that “We also deplore the violent attacks by Sudan’s security services on media outlets and journalists, and urge authorities to protect the freedom of the press.”

Internet services have been badly disrupted since the coup, and phone coverage remains patchy. Although daily life came to a near standstill when the coup happened, shops, roads, and some banks have since reopened.

The coup followed months of rising tensions in the country, where military and civilian groups have shared power in the years since Bashir was deposed. Since 2019, Sudan had been ruled by a shaky alliance between the two.

The country’s military chief, Gen. Abdel Fattah Al-Burhan, reinstated Hamdok last month as part of a deal between the military and civilian leadership.

Under the deal agreed by Hamdok and Al-Burhan, Hamdok again becomes leader of the transitional government, which was first established after strongman President Omar al-Bashir was ousted in 2019.

The Council of Ministers, which was dissolved on October 25, will be restored and the civilian and military leadership will share power. The constitution will be amended to outline the partnership between civilians and the military in the transitional government.

But the agreement also includes as yet unspecified restructuring, according to Mudawi Ibrahim, a prominent official in the National Forces Initiative (NFI), which helped mediate the talks, and it has been met with resistance in Sudan.