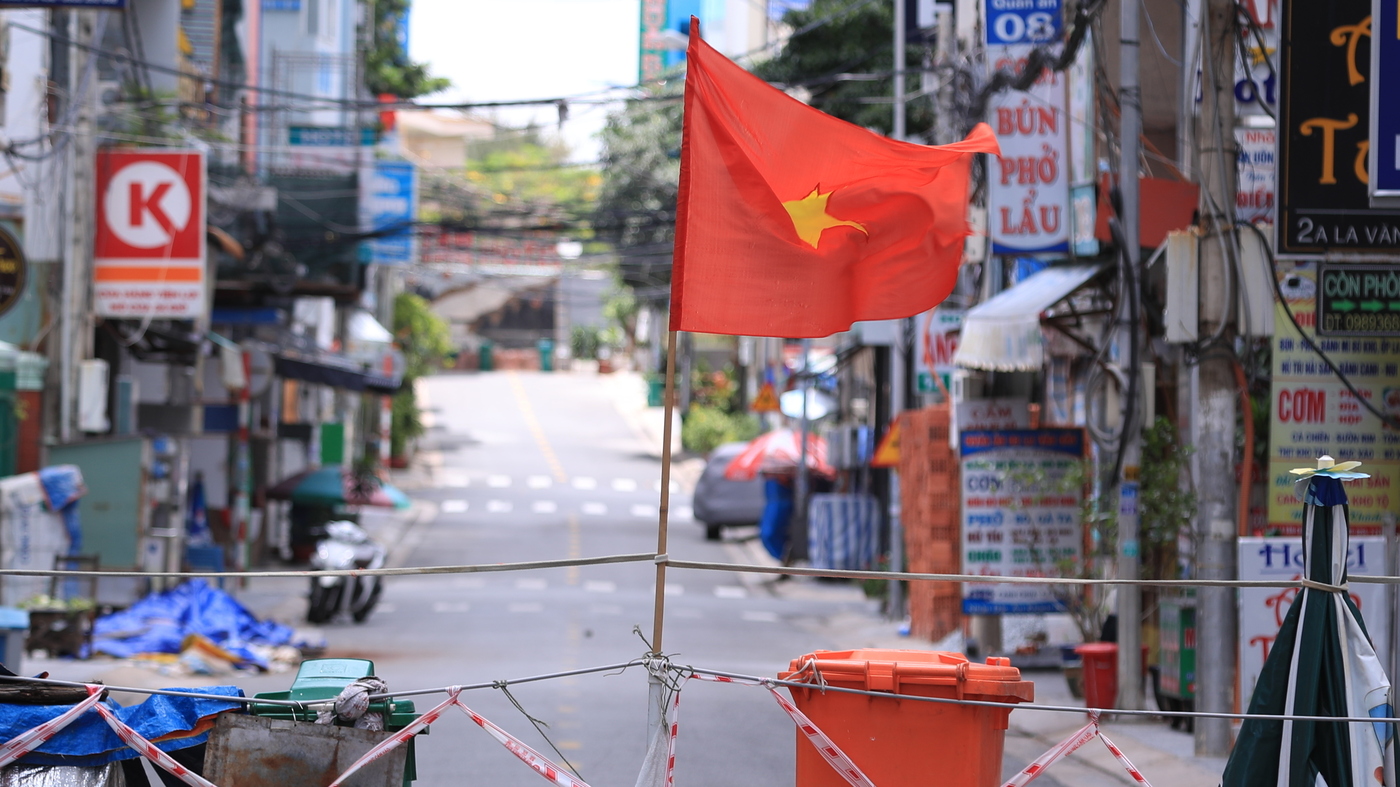 AP Reporter Under Lockdown Away From Home For Nine Weeks : NPR

A street is blocked with carts and trash cans in the seaside city of Vung Tau, Vietnam on Sept. 13, 2021. More than a half of Vietnam is under lockdown to contain its worst virus outbreak yet

A street is blocked with carts and trash cans in the seaside city of Vung Tau, Vietnam on Sept. 13, 2021. More than a half of Vietnam is under lockdown to contain its worst virus outbreak yet

VUNG TAU, Vietnam (AP) — I wake up as the loudspeaker outside my window starts the community broadcast at 7 a.m. I try to recall the date. Vietnam’s pandemic lockdown has been so long I’ve lost my sense of time. I now count by weeks.

This is the ninth I’ve been stuck in Vung Tau, a seaside resort more than 1,500 kilometers (900 miles) from my home in Hanoi.

I get out of bed, keeping to my routine of yoga before breakfast. As I roll out the mat, the broadcast gives the latest pandemic news and blares out a propaganda-style song: “Citizens, let’s join forces in this fight so COVID disappears…”

As I started my travels, a new outbreak emerged in Vietnam but I was confident — and I believe the country was confident — that it would be able to stop it quickly, just as it had previous ones. Until then, Vietnam had reported just over 8,000 cases and 35 virus deaths and won global praise for its pandemic success.

The delta variant’s arrival changed everything.

The strain spread like wildfire through factories in industrial zones, into markets and on to communities across the country. In Ho Chi Minh City, the country’s largest with 10 million people, authorities ordered a city-wide lockdown. Soon it was expanded to include the entire southern region, home to more than a third of the country’s 98 million people.

Inter-provincial public transport was halted, and air travel from Ho Chi Minh City was suspended, including my return flight home. I was stranded in Vung Tau as the city announced its first ever COVID-19 case.

It didn’t seem like a big deal at first.

I was positive the situation would be under control quickly; that I’d just have to wait out the two-week lockdown and things would get back to normal. It seemed like a chance to slow down and enjoy time with my partner.

I took an avocado seed from a recent lunch, wrapped it in damp paper towel and put it in a bag to see if it would sprout before the lockdown ended.

More than half of Vietnam’s people are currently under lockdown.

New daily cases have surpassed 10,000 and deaths are being reported in hundreds. Of Vietnam’s nearly 16,000 COVID-19 fatalities, more than 99% have come in this latest wave.

The government tightened restrictions further this month, telling people to “stay put wherever you are” to buy time to vaccinate more people.

Barricades and checkpoints were set up to make sure people can’t go out on the street unless they hold a permit. In some communities, authorities padlocked the gates of each household.

Under the restrictions, people must stay at home except for those working in a handful of businesses classified as essential services. In high-risk areas, the army has been mobilized to deliver food and basic necessities to each household. In lower-risk areas, like where I am, each family is allowed to go out to buy food and medicine once a week within their small neighborhood.

This week the government said it was speeding up its vaccination program. Over the weekend, more than 1 million shots were given in Hanoi alone and authorities were aiming to have 100% of eligible residents with at least one shot by week’s end.

Still, the overall vaccination rate remains low with only 4% having received two shots.

Vung Tau extended its lockdown for the sixth time over the weekend, adding another two weeks.

The lockdown day is long and the longer it goes on, the more it drags.

From my balcony, every time I feel frustrated, I comfort myself by thinking how lucky and privileged I am for not having to spend the lockdown in far less comfortable conditions like millions of my countrymen cooped up in small non-air conditioned apartments in the summer heat.

To avoid depression, I try to fill the days with other activities beside work. I binge Netflix with my partner, with whom I’ve never been together for such a long time over the past seven years. I spend more time learning my partner’s native French. I follow workouts on YouTube, making up for the disruption of my marathon training.

Before this wave, I felt like the pandemic was somewhere else. I didn’t know anyone who contracted the virus in Vietnam.

But bad news started to rush in: A friend of mine got it, together with four others in her family. Three of them were moved to three different hospitals while two remained at home because of their mild symptoms. On my Facebook feed, some changed their profile to black to mourn a lost loved one. The pandemic had become real to me.

I video chat almost every day with my parents, who are in their 70s.

It worries me that the virus has inched onto their Hanoi street; their neighbors were the latest cases and their alley was cordoned off with a sign “pandemic area.” I breathed a slight sigh of relief when they finally got their first shot of vaccine two weeks ago.

I also have a family group chat, including my three siblings and five nieces and nephews. We’re very close and are used to seeing each other often. We haven’t been able to meet up since the lockdown.

In marathons, there’s a finish line, a goal that helps keep me going. With the lockdown extended over and over again, it’s hard to envisage when it might end. Yet without it, who knows what the death toll could be.

For the moment, I try to seek solace in simpler things.

My avocado seed has sprouted and has grown tall, more quickly than others I’ve sprouted in the past.

I keep a lot of plants in Hanoi. Unfortunately, many must have died by now.

I didn’t plan to be away this long.