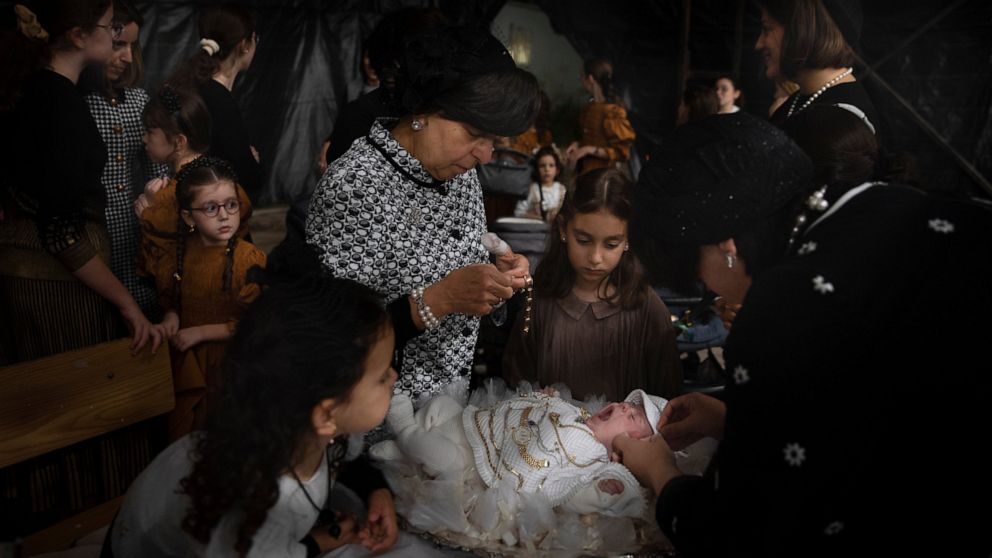 BEIT SHEMESH, Israel — Shortly after sundown, Yaakov Tabersky presented his firstborn son on a silver platter to a Jewish priest in a ceremony harking back to the biblical exodus from Egypt.

The ceremony, known as “pidyon ha-ben,” or redemption of the firstborn, was held in an ultra-Orthodox community in Beit Shemesh, near Jerusalem. Thursday night’s ceremony had added significance because the baby is the great-grandchild of Aharon Biderman, the chief rabbi of the Lelov Hassidic dynasty.

Firstborn sons originally made up the priesthood of the ancient Israelites. As described in the Book of Exodus, they were spared from the final plague brought upon the pharaoh, in which God was said to have wiped out the firstborn sons of Egypt, an event commemorated every spring at Passover.

However, the Jewish firstborn later lost that privilege when the Israelites joined in the worship of a golden calf, after being delivered from Egypt, in defiance of the prohibition against idolatry. The priesthood was then transferred to the descendants of the prophet Aaron, who did not participate. Tradition holds that Jews should redeem their firstborn sons to a kohen, a member of the priestly class descended from Aaron.

The ceremony is held 30 days after the birth of the mother’s first son and accompanied by a festive meal attended by family and friends. Participants dress in their finest attire and adorn the baby with jewelry to celebrate the blessing. The rite is mainly observed by the ultra-Orthodox.

The father presents the baby on a silver platter to the kohen, symbolically returning his firstborn son to God. The kohen then offers to accept five silver coins instead of the child, and once the payment is made the son is redeemed. The kohen then raises a glass of wine and recites a prayer.

Here is a gallery of images from Oded Balilty, the Associated Press’ chief photographer for Israel, the West Bank and Gaza.

2022-07-16
Previous Post: Saudi Arabia’s ties to the U.S. and China are not mutually exclusive: Al Jubeir
Next Post: ‘I just cry’: Dying of hunger in Ethiopia’s blockaded Tigray