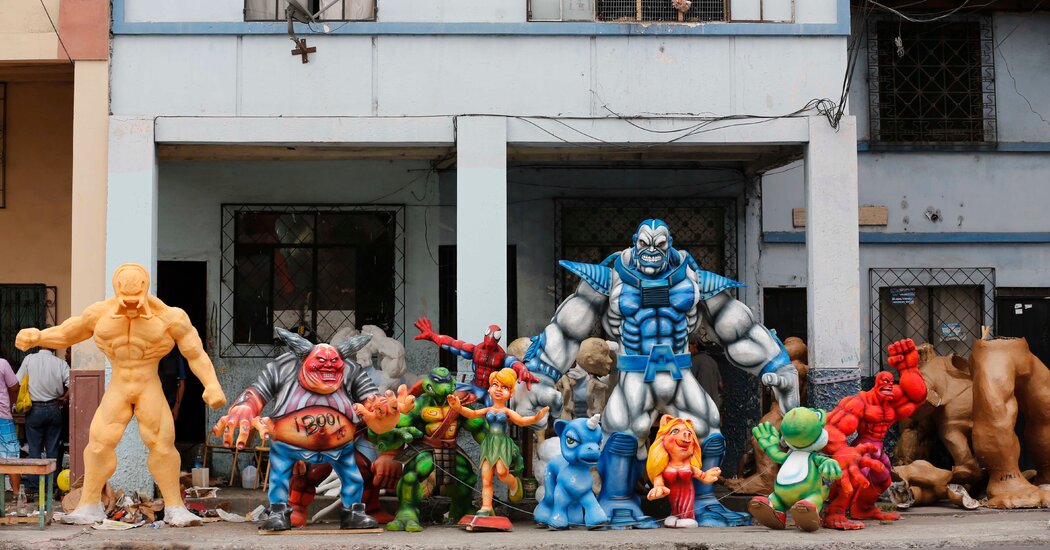 Años Viejos: Torching the Old Year to Toast the New One

“The concept of años viejos comes from European influence,” Professor Gonzales said, adding that unlike European cultures, which experience time with a beginning and an end, Andean cultures conceive of time as “continuous.”

But rituals to expel epidemics or ailments are prehistoric and Indigenous, Professor Gonzales said.

María Belén Calvache, a specialist in politics and traditions in Ecuador, said in an interview that “there are historical records in Ecuador that show that Indigenous populations, specifically the people from Otavalo, would burn a doll symbolizing a feudal leader during the celebration of the solstice in December, March and June.”

She added, “They were burned as a symbol of regeneration.”

The first años viejos as we know them today were burned along the Andean sierra in major Ecuadorean cities like Quito and Guayaquil in the 19th century, historians explained. The burnings were the climax of a 10-day Catholic celebration marking the end of the year, running from Dec. 28, the Day of the Innocents, to Three Kings Day, on Jan. 6.

During those days, people wore masks and costumes on the streets. On Dec. 31, large rag dolls representing drunken old men were carried through the streets by masked people dressed in white to represent their weeping widows, Ms. Calvache explained. Because the drunks didn’t leave wills, the widows would roam about asking for money. At midnight, the rag doll would be burned, “and a humorous testament where different things are left to the mourners is read,” Ms. Calvache added. Those things were usually satirical omens or wishes for prosperity.

“For a fundamentally working-class society, end-of-the-year celebrations were an opportunity to forget about sorrows through parties,” said Alfonso Ortiz Crespo, a historian and architect from Ecuador. “It was a time to make fun of the other — not only civil authority, but also make fun of the neighbor, the friend and the relative, or the political enemy.”